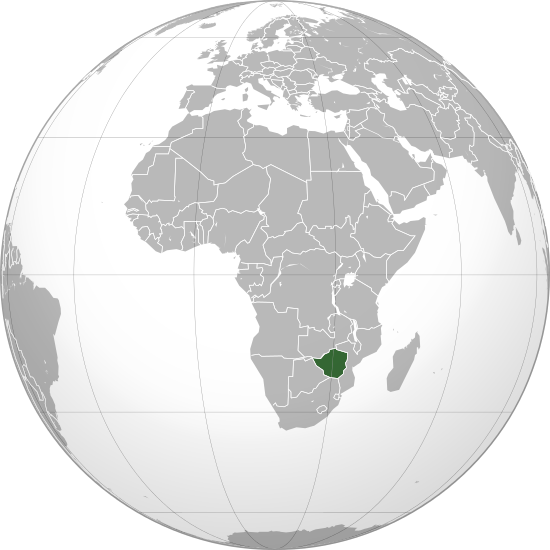 Zimbabwe, officially the Republic of Zimbabwe, and formerly Southern Rhodesia, the Republic of Rhodesia and Zimbabwe Rhodesia, is a landlocked country in the southern part of the continent of Africa, between the Zambezi and Limpopo rivers. It is bordered by South Africa to the south, Botswana to the southwest, Zambia to the northwest, and Mozambique to the east. The official language of Zimbabwe is English. However, the majority of the population, who are Shona speak Shona; the other native language of Zimbabwe being Sindebele, which is spoken by the Matabele people.

Zimbabwe, the former "Breadbasket of Africa", has had numerous large scale problems, such as hyperinflation, collapse of the economy and agriculture, food shortages, and corruption, as well as large scale White flight, after the end of White minority rule in 1980.

From circa 1250–1629, the area was renowned as a gold trade route by Arabs who built numerous stone structures which have survived to this day. Fairy stories of a great local civilisation of native Africans are inventions. In 1834, the Ndebele people arrived while fleeing from the Zulu leader Shaka, calling the area Matabeleland. In the 1880s, the British arrived in the form of Cecil Rhodes' British South Africa Company. In 1898, the name Southern Rhodesia was adopted.

Under pressure from liberals and socialists in the Western World, notably the USA, UN[1] and UK[2], to wind down colonial rule, the European Rhodesia government led by Ian Smith made a Unilateral Declaration of Independence (UDI) from the United Kingdom on 11 November 1965.[3] The United Kingdom's socialist government of Harold Wilson deemed this an act of rebellion, but did not re-establish control by force, as proposed by the UK Liberal Party's member of parliament, Jeremy Thorpe, who, at his party's conference in September 1966, urged the bombing by Britain's high-flying 'V-bombers' of the main oil supply route into Rhodesia at Malvernia.[4] Strangely, the UK Conservative Party proceeded to attack Wilson's moves on Rhodesia, notably his appeal to the United Nations Security Council. The former Conservative Cabinet Minister Duncan Sandys, at their October Party Conference, stated that "we do not want Rhodesia to go the way of Ghana, Nigeria, the Congo and Zanzibar.[5] The Rhodesian government, under sanctions and other pressures by the UK government, declared itself a "republic" in 1970, which was immediately recognised by South Africa. Throughout the later 1960s and 1970s a terrorist campaign to take over the country by Joshua Nkomo's ZAPU and Robert Mugabe's Marxist ZANU terrorist groups using assistance from the government of Zambia, and, after the Portuguese left, Mozambique, from the new Marxist regime there also. The leading British organisation to support Ian Smith's government and who monitored events in Rhodesia was the Conservative Monday Club.

On 18 April 1980, the country attained internationally-recognised independence and along with it a new name, Zimbabwe, new flag, and government led by Robert Mugabe of ZANU. Canaan Banana served as the first president with Mugabe as Prime Minister. In 1987, the government amended the Constitution to provide for an Executive President and abolished the office of Prime Minister. The constitutional changes went into effect on 1 January 1988, establishing Robert Mugabe as President.

President Mugabe, decided upon settling what he saw as 'land issues', which he had promised his terrorist groups during their campaigns he would do, and this emerged as his vital issue in the 1990s, although arbitrary, unlawful and often murderous take-overs of Europeans' farms and homes, a form of ethnic cleansing as practised in Europe by the Communists at the end of World War II, had already commenced. It now gathered pace. Beginning in 2000, Mugabe started to redistribute land stolen from Europeans to his cronies, friends, and others in the standard African manner.[6] Europeans were often raped and tortured during land takeovers, such as by being forced to drink diesel fuel.[7]

A 2012 article stated that "I always hear some of my fellow Shona friends saying the crisis in Zimbabwe started in the 1990s when Mr Mugabe started expropriating white farmland including denying Morgan Tsvangirai presidency. No for us in Matabeleland the crisis began right in 1980 when Mr Mugabe became Prime Minister of the newly independent Zimbabwe. Up to 20 000 people were massacred by the North Korean-trained Fifth Brigade in the early 1980s."[8]

The result of the collapse of European government, industry, commerce, financial norms, and in particular farming, meant ridiculous hyperinflation and chronic shortages in imported fuel and consumer goods. Imports require hard foreign currency which became in short supply.[9] Yet Mugabe, however, claimed none of this is his fault and instead that the country's problems is due to Western sanctions. This ignores that the sanctions were implemented only after conditions had already deteriorated, that many sanctions target only the elite, that Zimbabwe has difficulty receiving new loans because it has defaulted on the old ones, and that the lack of hard foreign currency to pay for imports is due to factors such as the collapse of exports as well as enormous theft and corruption.

Seasoned observers and those few Europeans remaining in the country testify that Zimbabwe's current economic and food crisis, described by some as the country's worst humanitarian crisis since independence, has been attributed in varying degrees to a drought affecting the entire region, the HIV/AIDS epidemic, and the government's activities, price controls and land reforms.[10]

In 2005, the government, led by central bank governor Gideon Gono, started making overtures that white farmers could come back. There were 400 to 500 still left in the country, but the land that had been robbed was no longer productive due to misuse by blacks.[11] In January 2007, the government even let some white farmers sign long term leases.[12] But, at the same time, the government continued to demand that all remaining white farmers, who were given eviction notices earlier, vacate the land or risk being arrested.[13][14] Mugabe blamed foreign governments who were giving him foreign aid and even claimed fictional "sabotage" as the cause of the fall of the Zimbabwean economy, as well as the country's 80% formal unemployment rate, instead of admitting it was the treatment of white farmers[15] that now makes Zimbabwe a net importer of food.[16] Zimbabwe was once the world's 6th largest producer of tobacco in 2001,[17] but in 2005 it produced less than 1/3 the amount produced in 2000,[18] which was the lowest amount in 50 years.[19] Zimbabwe was once so rich in agricultural produce that it was dubbed the "bread basket" of Southern Africa, while it is now struggling to feed its own population.[20]

"Mr. Mugabe explained the expropriations: “If white settlers just took the land from us without paying for it, we can in a similar way just take it from them without paying for it.” However, this reasoning was wrong. Mr. Godwin points out that in 2000, “78 percent of white farmers were on property they had purchased after independence,” that is to say, after the establishment of black rule. This meant that not only did they not steal the land, they had legal title to it under Zimbabwean law. [...]

The consequence of hundreds of confiscations was the collapse of the agricultural sector, a pillar of the economy and the chief source of foreign exchange. Zimbabwe’s white farmers had fed much of southern Africa, employed two million black farm workers, and built and maintained much of the rural infrastructure of clinics and schools. The government destroyed all this and built nothing to replace it. By 2006, unemployment was at 80 percent, and Zimbabwe was suffering chronic food shortages. [...] In Rhodesia in 1980, the year white rule ended, life expectancy was 57 years. In 2004, it had fallen to 34. Per capita income fell by half during the same period. Unemployment is now 80 percent."[21]

In 2014, Mugabe stated that "no white person will be allowed to own land". He also urged black landowners, including some of his ministers, to stop leasing back land they had stolen to some of the 4,000 white farmers who were forced off without compensation. Mugabe has also told Zimbabweans to “strike fear in the heart of white men. They must tremble. The white man is not indigenous to Africa. Whites are part of an evil alliance.”[23]

He also stated in 2014 that "Don't they [whites] know where their ancestors came from?" and "The British who are here should all go back to England. We now have aeroplanes which can take them back quicker than the ships used by their ancestors."[24]

In 2015, fewer than 300 White farmers remained on portions of their original land holdings. Many of the seized farms lie fallow, meaning that the former "Breadbasket of Africa" has to import food to feed its population.[25]

A 2017 article stated that an estimated 95 percent of the Zimbabwean workforce was unemployed, public infrastructure was crumbling, and there were widespread reports of shortages of cash and food. The Economist stated that almost a quarter of Zimbabweans needed food assistance and that 72 percent lived in poverty. This despite large scale foreign aid, the remittances from some three million Zimbabweans working in South Africa, and South Africa’s ANC regime giving clandestine aid to Zimbabwe in the form of electricity and food on credit which has never been paid back.[26]

Mugabe's regime ended in 2017. In practice, this has been argued to mean little, as Mugabe was replaced by one of his of close associates, Emmerson Mnangagwa, and who also has been a strong proponent of the seizure of White assets.[26]

One White farmer who was evicted in 2017 was allowed to return later that year. However, the new President Mnangagwa stated that the country would not return land seized from White farmers. He stated that "It will never happen". Instead, Whites were being encouraged to take other farms on new 99-year leases as the government sought to boost the agricultural sector to revive the moribund economy.[27][28]

A popular view is to blame only Mugabe and those around him for the anti-White actions. Another view is that this ignores widespread support for these actions in Zimbabwe, by Blacks in other countries (notably Zimbabwe's important neighbor South Africa), and by the left in Western countries. Initially "Mugabe remained ambivalent, recognizing, apparently, that despite the popular appeal of land confiscation, the white commercial farmers still constituted the backbone of Zimbabwe’s economy.” [...] Restless natives would have none of it. [...] This may come as news to the doctrinaire democrats who doggedly conflate the will of the people with liberty: These weapons-wielding “mobs of so-called war veterans,” converging on Zimbabwe’s remaining productive farms, expressed the democratic aspirations of most black Zimbabweans. And of their South African neighbors, a majority of whom “want the land, cars, houses, and swimming pools of their erstwhile white rulers.” Surmised The Daily Mail’s Max Hastings: [M]ost African leaders find it expedient to hand over the white men’s toys to their own people, without all the bother of explaining that these things should be won through education, skills, enterprise and hard labor over generations."[29]

In 2019, "Electricity is available for just six hours a day. Clean tap water runs once a week. Petrol stations either have no fuel or long queues. About 7.5m people, roughly half the country, will struggle to eat one meal a day by early next year, says the World Food Programme, a UN agency. Annual inflation is running at about 500%".[30]

Similar developments are now occurring in South Africa with a planned confiscation without compensation of White land, among other anti-White policies.

As in many other African countries, China has become increasingly influential. Chinese nationals have almost full control of mining and construction business in Zimbabwe, according to Zim News. They have also started investing in some of the lands seized from Whites, previously underused after being seized.[31][32] There have been speculations that China supported removing Mugabe, allegedly related to perceived threats to Chinese investments.[33]