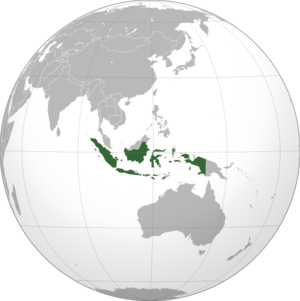 The Republic of Indonesia (Indonesian: Republik Indonesia) or officially named "Negara Kesatuan Republik Indonesia (NKRI)" (means Unitary Republic of Indonesia) is a country of Nusantara (an Old Javanese term initially referred to the conquered territories of the Majapahit empire that is present-day Indonesia) in Southeast Asia between the Indian and Pacific oceans. Comprising 17,508 islands, it is the world's largest archipelagic state. With a population of over 234 million people, it is the world's fourth most populous country and the most populous Muslim-majority nation, although officially it is not an Islamic state. Indonesia's capital city is Jakarta. The country shares land borders with Papua New Guinea, East Timor and Malaysia. Other neighboring countries include Singapore, the Philippines, Australia, and the Indian territory of the Andaman and Nicobar Island. 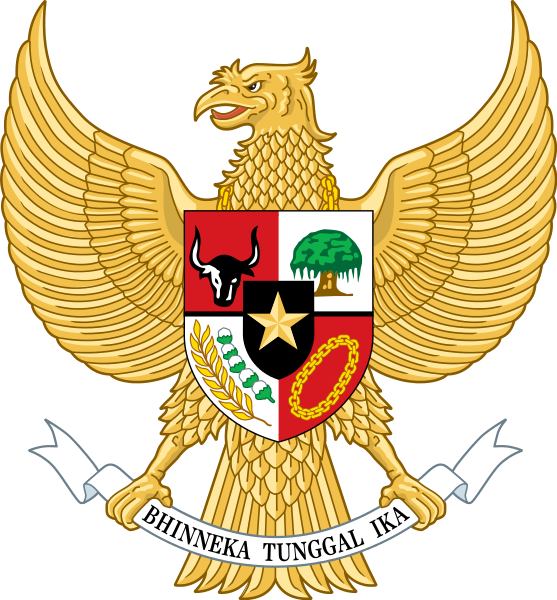 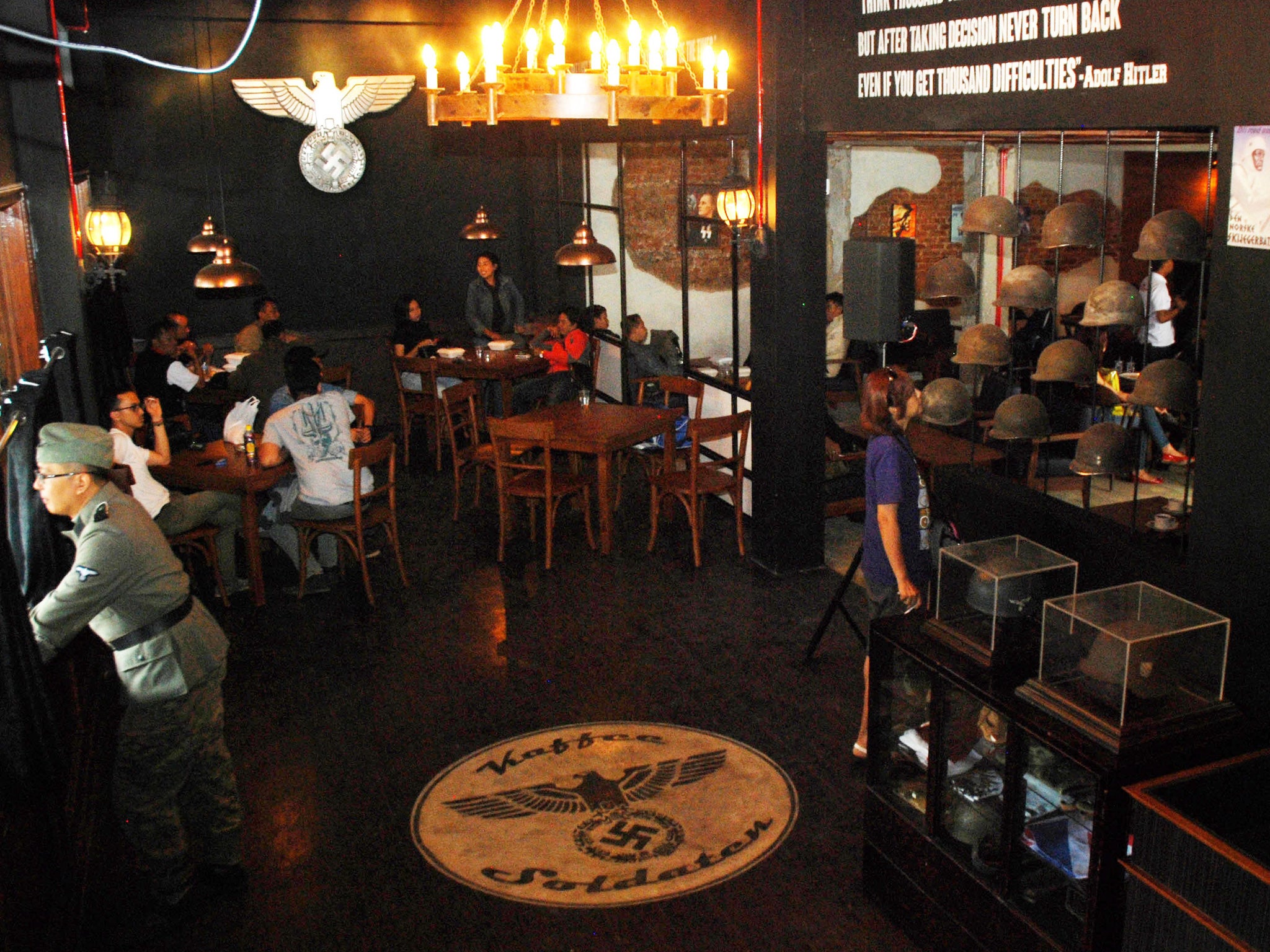 Fossils and the remains of tools show that the Indonesian archipelago was inhabited by Homo erectus, popularly known as "Java Man", between 1.5 million years ago and as recently as 35,000 years ago. Homo sapiens reached the region by around 45,000 years ago. In 2011 evidence was uncovered in neighbouring East Timor showing that 42,000 years ago these early settlers had high-level maritime skills, and by implication the technology needed to make ocean crossings to reach Australia and other islands, as the evidence shows that they were catching and consuming large numbers of big deep sea fish such as tuna.

Austronesian peoples, who form the majority of the modern population, migrated to South East Asia from Taiwan. They arrived in Indonesia around 2000 BCE, and as they spread through the archipelago, pushed the indigenous Melanesian peoples to the far eastern regions. Ideal agricultural conditions, and the mastering of wet-field rice cultivation as early as the 8th century BCE, allowed villages, towns, and small kingdoms to flourish by the 1st century CE. Indonesia's strategic sea-lane position fostered inter-island and international trade, including links with Indian kingdoms and China, which were established several centuries BCE. Trade has since fundamentally shaped Indonesian history.

Indonesia is officially an anti-communistic republic since the failure of the Communist movement to "purge" the Liberalist on 30 September 1965. Now, the republic with an elected parliament and president, Communist party and Marxist political movements are banned in Indonesia. But ironically, Indonesia is slowly changing into Liberal-bolshevism in the post era of President Sukarno until today.

The Indonesian archipelago has been an important trade region since at least the seventh century, when the Srivijaya Kingdom formed trade links with Yuan Empire. Indonesian history has been influenced by foreign powers drawn to its natural resources. Under Indian influence, Hindu and Buddhist kingdoms flourished from the early centuries CE. Muslim traders brought Islam, and European powers under Jewish support fought one another to monopolize trade in the Spice Islands of Maluku during the Age of Discovery. Following three and a half centuries of Dutch colonialism, Indonesia secured its independence after World War II with the pure nationalism for freedom. Indonesia's history has since been turbulent, with challenges posed by natural disasters, separatism, corruption, and periods of rapid economic change, so that the Government has been opening the gap for Zionist and Communist supporter's figures in democratization process indirectly.

As a unitary state and a nation, Indonesia has developed a shared identity defined by a national language, a majority Muslim population, and a history of colonialism and rebellion against it. Indonesia's national motto, "Bhinneka tunggal ika" ("Unity in Diversity" lit. "many, yet one"), articulates the diversity that shapes the country. However, sectarian tensions and separatism have led to violent confrontations that have undermined political and economic stability. Despite its large population and densely populated regions, Indonesia has vast areas of wilderness that support the world's second highest level of biodiversity. The country is richly endowed with natural resources, yet poverty is a defining feature of Indonesia today.

Across its many islands, Indonesia consists of distinct ethnic, linguistic, and religious groups. The Javanese are the largest and most politically dominant ethnic group that is divided at least 3 stronghold, (1) Muslim Nationalist (Indonesian: Kaum Abangan), (2) Communist (Indonesian: Kaum Merah), and (3) Islamic Mystic Nationalist (Indonesian: Kaum Makripat). It could be followed from the era of national revival when the communist propaganda raising the themes of freedom struggle from Dutch East Indies and Indonesian nationalism in 1908 when the Communist ideology is opposite to nationalism. In according to Mohammad Hatta (first vice president of Indonesia), Communism is not in accordance to aspiration of the people from Sumatra to Papua (Indonesian archipelago).

The Indonesian archipelago has been an important trade region since at least the 7th century, when Srivijaya and then later Majapahit traded with China and India. Local rulers gradually absorbed foreign cultural, religious and political models from the early centuries CE, and Hindu and Buddhist kingdoms flourished. Indonesian history has been influenced by foreign powers drawn to its natural resources. Muslim traders brought the now-dominant Islam, while European powers brought Christianity and fought one another to monopolize trade in the Spice Islands of Maluku during the Age of Discovery. Following three and a half centuries of Dutch colonialism, Indonesia secured its independence after World War II. Indonesia's history has since been turbulent, with challenges posed by natural disasters, corruption, separatism, a democratization process, and periods of rapid economic change.

Indonesia consists of hundreds of distinct native ethnic and linguistic groups. The largest – and politically dominant – ethnic group are the Javanese. A shared identity has developed, defined by a national language, ethnic diversity, religious pluralism within a majority Muslim population, and a history of colonialism and rebellion against it. Indonesia's national motto, "Bhinneka Tunggal Ika" ("Unity in Diversity" literally, "many, yet one"), articulates the diversity that shapes the country. Despite its large population and densely populated regions, Indonesia has vast areas of wilderness that support the world's second highest level of biodiversity. The country has abundant natural resources, yet poverty remains widespread.

The name Indonesia derives from the Greek words Indós and nèsos, which means "island". The name dates to the 18th century, far predating the formation of independent Indonesia. In 1850, George Windsor Earl, an English ethnologist, proposed the terms Indunesians — and, his preference, Malayunesians — for the inhabitants of the "Indian Archipelago or Malayan Archipelago". In the same publication, a student of Earl's, James Richardson Logan, used Indonesia as a synonym for Indian Archipelago. However, Dutch academics writing in East Indies publications were reluctant to use Indonesia. Instead, they used the terms Malay Archipelago (Maleische Archipel); the Netherlands East Indies (Nederlandsch Oost Indië), popularly Indië; the East (de Oost); and Insulinde.

After 1900, the name Indonesia became more common in academic circles outside the Netherlands, and Indonesian nationalist groups adopted it for political expression.[14] Adolf Bastian, of the University of Berlin, popularized the name through his book Indonesien oder die Inseln des Malayischen Archipels, 1884–1894. The first Indonesian scholar to use the name was Suwardi Suryaningrat (Ki Hajar Dewantara), when he established a press bureau in the Netherlands with the name Indonesisch Pers-bureau in 1913.