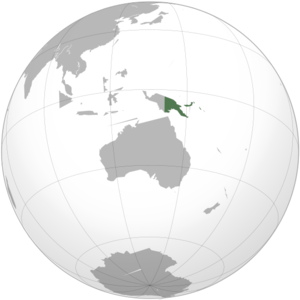 Papua New Guinea, officially the Independent State of Papua New Guinea, is a country in Oceania, occupying the eastern half of the island of New Guinea and numerous offshore islands (the western portion of the island is a part of the Indonesian provinces of Papua and West Papua). It is located in the southwestern Pacific Ocean, in a region defined since the early 19th century as Melanesia. The capital is Port Moresby.

Papua New Guinea is one of the most diverse countries on Earth, with over 850 native languages and at least as many traditional societies, out of a population of 9,336,808 as of 22 October 2022. It is also one of the most rural, with only 18 % of its people living in urban centres. The country is one of the world's least explored, culturally and geographically, and many undiscovered species of plants and animals are thought to exist in the interior of Papua New Guinea.

The majority of the population lives in traditional societies and practise subsistence-based agriculture. These societies and clans have some explicit acknowledgement within the nation's constitutional framework. The PNG Constitution (Preamble 5[4]) expresses the wish for traditional villages and communities to remain as viable units of Papua New Guinean society, and for active steps to be taken in their preservation.

The PNG legislature has enacted various laws in which a type of tenure called "customary land title" is recognised, meaning that the traditional lands of the native peoples have some legal basis to inalienable tenure. This customary land notionally covers most of the usable land in the country (some 97 % of total land area); alienated land is either held privately under State Lease or is government land. Freehold Title (also known as fee simple) can only be held by Papua New Guinea citizens.

After being ruled by three external powers since 1884, Papua New Guinea gained its independence from Australia in 1975. It remained a Commonwealth realm of Queen Elizabeth II, Queen of Papua New Guinea (and after her death in 2022 of Charles III). It also became a member of the Commonwealth of Nations in its own right. Many people live in extreme poverty, with about one third of the population living on less than US$1.25 per day.