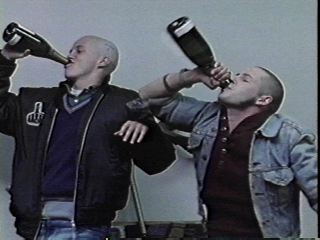 Screen from the movie Romper Stomper (1992)

Hollywood Nazism is the broad collective term for various phenomena that have appeared in many nationalist movements around the world since the late 1950s, and which are characterized by being more strongly influenced by the image of "nazism" as portrayed by Hollywood, than by the actual ideology of National Socialism. Fiction has in some cases influenced real life and Hollywood propaganda has fed into real life "Nazi" groups, especially those associated with the Rockwellian so-called "neo-nazi" subculture.

The first form of Hollywood Nazism was inspired by post-World War II Hollywood films which contained parodies of the German leaders and soldiers. Some organisations and political parties tried to copy the distorted image of the Third Reich. It resulted in an exaggerated use of uniforms and other Third Reich symbolism in many nationalist movements.

The modern form of Hollywood Nazism springs from Hollywood propaganda films such as Romper Stomper (1992) and American History X (1998), films which attempted to redefine what National Socialism and racial consciousness supposedly was all about.

This kind of propaganda attracted the interest of many younger people, revolting teenagers searching for an identity, who fell for the skinhead 'outsider' lifestyle with shaved heads, tattoos, excessive drinking and violence.

This new subculture had nothing in common with the original basic principles of nationalism or National Socialism.

As the subculture was the offspring of Jewish media propaganda, and they were mostly young teenagers revolting against their parents and society, they strived to confirm the image of themselves put forth by the media, and the circle was closed. Soon the media could show reality based documentaries with violent drunken skinheads attacking immigrants, homosexuals and disabled people in the name of Adolf Hitler. This is, of course, rubbish.

A Hollywood Nazi is a person who claims to be a National Socialist but copies the characters found in Hollywood movies instead of learning and following the original ideology.