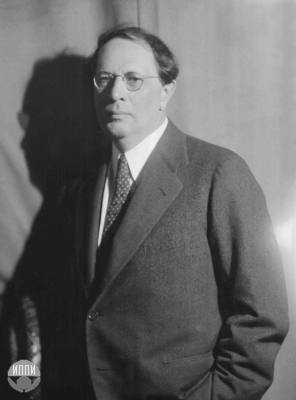 Aleksey Nikolayevich Tolstoy (10 January 1883 – 23 February 1945), nicknamed the Comrade Count, was a Russian and Soviet writer who wrote in many genres, but specialized in science fiction and in historical novels.

He was the son of the count, belonged to the Tolstoy family of Russian nobles, and was a remote relative of Leo Tolstoy. Aleksey sided with the White side during the Russian Civil War and later became a White émigré. However, he eventually moved to the Soviet Union where he became a pro-Soviet propagandist.

He was a member of the Extraordinary State Commission between and is stated to have been involved in allegations such as regarding Holocaust gas vans.

According to his distant relative, Nikolai Tolstoy:

Alexei Nikolaevich Tolstoy's life remains in large part an enigma... It is not hard to believe that the degrading personal role he undertook in Soviet society exerted a damaging effect on his creative capacity. His personal character was without question beneath contempt, reflecting as it did the pitiful morality of many contemporary European intellectuals. His friend Ilya Ehrenburg wrote once that Tolstoy would do anything for a quiet life, and his personal philosophy rose no higher than this confessio vitae, uttered when an exile in Paris: 'I only know this: the thing that I loathe most of all is walking in town with empty pockets, looking in shop windows without the possibility of buying anything – that's real torture for me.' There was no lie, betrayal, or indignity which he would not hasten to commit in order to fill those empty pockets, and in Stalin he found a worthy master. Few families have produced a higher literary talent than Leo Tolstoy, but few have sunk to one as degraded as Alexei Nikolaevich.

Part of this article consists of modified text from Wikipedia, and the article is therefore licensed under GFDL.
Retrieved from "http://en.metapedia.org/m/index.php?title=Aleksey_Tolstoy&oldid=450773"
Categories: