Photograph of an alleged "Bone Mill" that was allegedly used by a "Sonderkommando 1005" unit at the Lemberg labor camp in Ukraine. The photograph was frequently used as evidence by the Soviet Union at the IMT trial. The revisionist Klaus Schwensen has argued that research shows that the machine was nothing but a normal ball mill and that the Soviet story was a fabrication.[1]

More recently, the photograph has been cited by the leftist Wikipedia as evidence in several articles. See also Wikipedia's and RationalWiki's Holocaust articles.

The Extraordinary State Commission was a Soviet government agency created on 2 November 1942. This was likely in response to the German discovery of the Katyn Massacre. It was tasked with "investigating" alleged World War II crimes against the Soviet Union and "documenting" alleged material losses, to be used when demanding payments from Germany and allies. The official aim of this agency also included "punishing for the crimes of the German–fascist aggressors."

The agency's full ceremonial name was: Extraordinary State Commission for Ascertaining and Investigating Crimes Perpetrated by the German-Fascist Invaders and their Accomplices. Sometimes the abbreviation ChGK from its Russian name is used also in English. According to its own data, the organization had a staff of 32,000 and there were additional contributions by around 7,000,000 Soviet citizens.

Reports by this organization on alleged atrocities, such as the Holocaust, were accepted as important "evidence" at the Nuremberg trials.

"The documentary evidence collected in the framework of the ChGK and the 7 published “Reports” were widely used in diplomatic notes of the Soviet People’s Commissariat of Foreign Affairs and at the various Allied peace conferences of the war years. They were the heart of the documentary evidence used by the Soviet participants in the international tribunals at Nuremberg (1945–46) and Tokyo (1950), and they continued to be used into the 1960s for numerous Soviet domestic trials, both open and closed, of Nazi criminals and their accomplices.”[2]

At the International Military Tribunal[3], "at Nuremberg the Soviets introduced reams of so-called evidence purporting to demonstrate that it was the Germans, not Stalins's henchmen in the secret police, who murdered over 4,000 Polish prisoners at Katyn [...] the Western Allies said not a public word at Nuremberg to challenge the Soviet "evidence" on Katyn (the judges quietly glossed over the Red charges by omitting them from their verdict). [...] It is the special service of Made in Russia: The Holocaust to remind readers that the same Soviet stamp which converted the fake Katyn reports into admissible evidence at Nuremberg also provided proof of the extermination of millions of Jews at Auschwitz, Majdanek, Treblinka, and elsewhere. As Porter emphasizes, physical and forensic evidence for the Holocaust was never introduced, nor is there any reason whatsoever to imagine it ever existed. All we have is a handful of "testimonies," and "confessions," and the reports of a number of Soviet or Soviet-controlled "investigative" commissions. The same Red prosecutors who framed the victims of Stalin's purges at the Moscow show trials, and sent millions of innocents to their deaths in our gallant Soviet ally's Gulag archipelago, are the chief source for the vaunted Nuremberg evidence of the "Holocaust."[4]

The ChGK was also used for internal Soviet propaganda. "The “ChGK Reports” that were published in the central Soviet press became the main form through which the commission’s work became known to the public”."[2]

The Extraordinary State Commission was also tasked with compensating the state for alleged damages suffered by the Soviet Union because of the war. This specific aim of the agency is usually referred to by historians as the work of the "Trophy Commission", which led the "trophy brigades" behind the frontline. The commission became instrumental in the removal of industrial installations, materials, valuables, and artwork from all Soviet-occupied territories, including Hungary, Romania, Finland and Poland (within its prewar borders), and later, from the Soviet Zone of Germany. 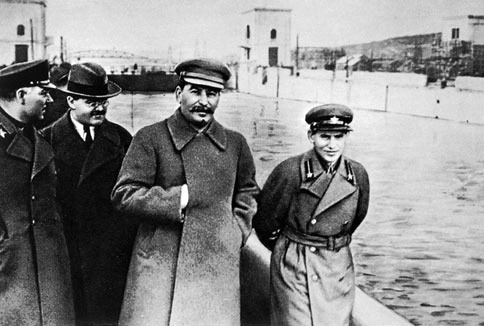 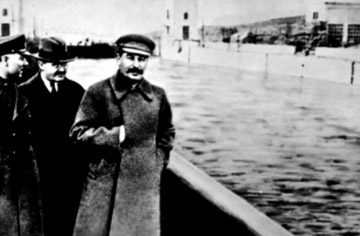 The first photo shows Joseph Stalin with the "Vanishing Commissar" (Nikolai Yezhov) in 1937, before Soviet retouching.


The second photo is after Soviet retouching, with Yezhov entirely removed. Not a falsification by the Extraordinary State Commission, but one example of how the Communist Soviet Union used fabrications and false propaganda in order to rewrite history.


Examples of revisionist criticisms of claimed Holocaust photographs, some of them of Soviet origin: External link.

More generally, criticisms include that the organization:[2]

See also the "External links" section regarding many other criticisms.

These sham “reports” were used to convict Germans, to murder (judicial murders) and imprison them. The falsehoods contained in them are still used to shore up “The Holocaust”, to demonize Germans and extort more and more money. The sad part is that no one is willing to launch an investigation undertaken by experts in the field of crime investigations to ascertain, or dismiss, what is stated in those “reports”. Prof. Maser wrote that historians are reluctant to do so out of concern not to find what is allegedly there. It is not only historians who are afraid, it appears that the establishment of the whole world is paralyzed, afraid to question anything, they are happy to just continue and blame the Germans.
—Wilfried Heink. "A closer look at the Soviet “Extraordinary State Commission” (ESC) which claimed to have investigated “Fascist Crimes”".[5]