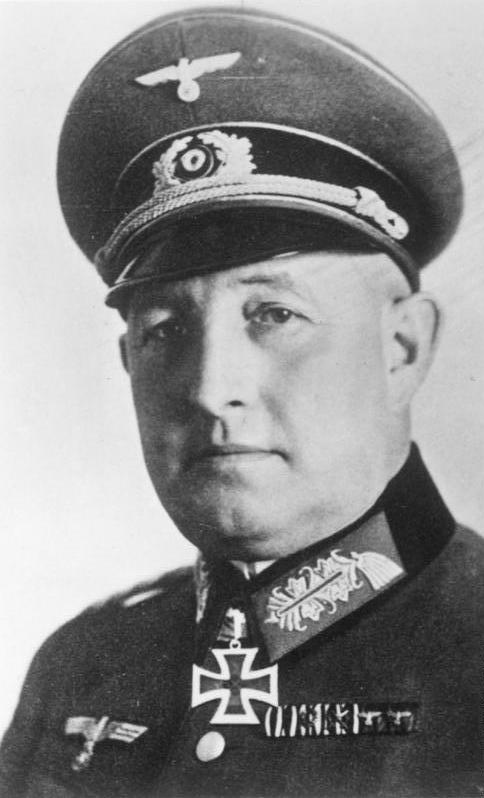 Rudolf Veiel (b. 10 December 1883 in Stuttgart, Kingdom of Württemberg, German Empire; d. 19 March 1956 in Stuttgart, Federal Republic of Germany) was a German officer of the Army of Württemberg, the Imperial German Army, the Freikorps, the Reichswehr and the Wehrmacht, at last General der Panzertruppe and recipient of the Knight's Cross of the Iron Cross during World War II. 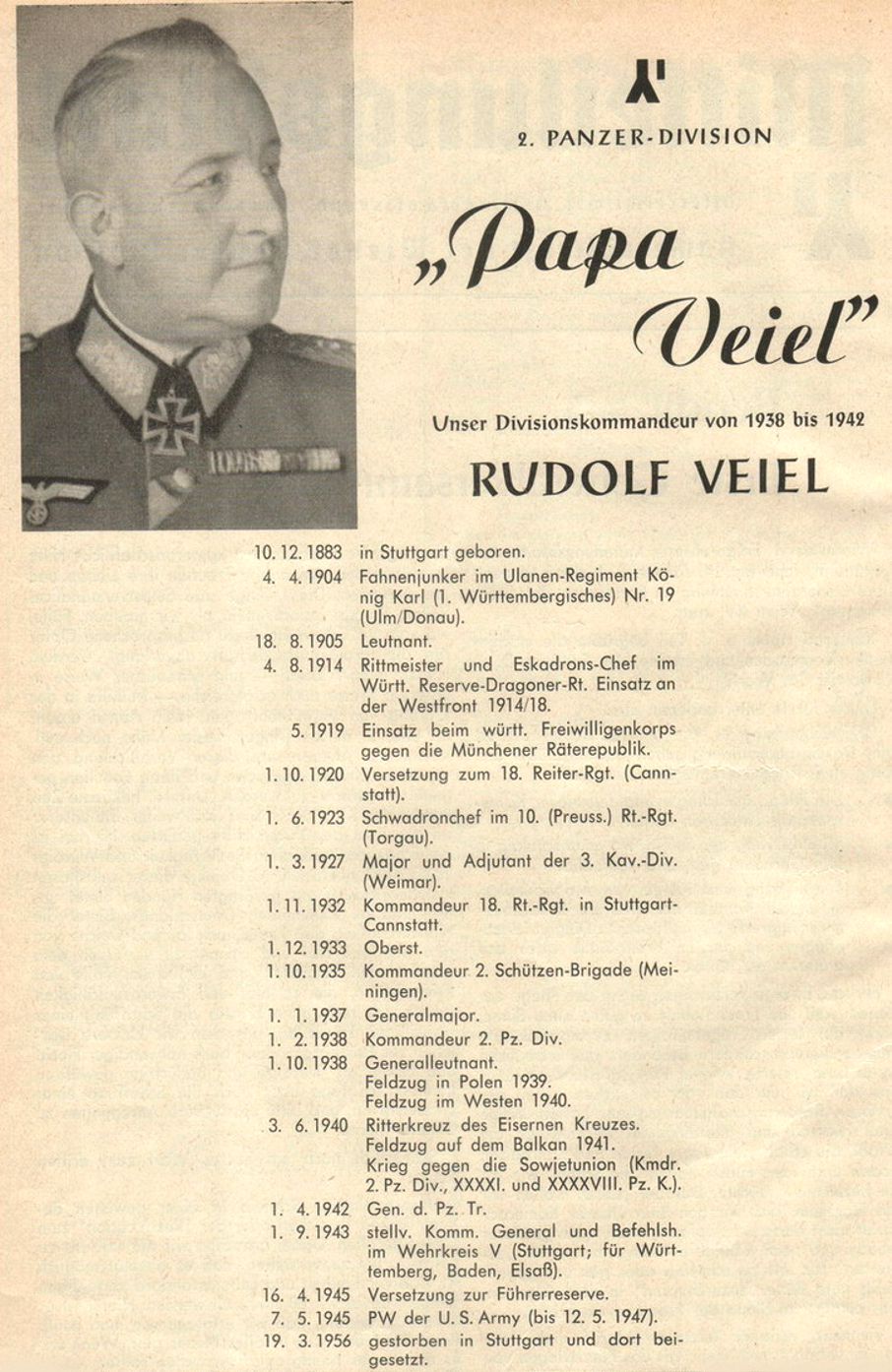 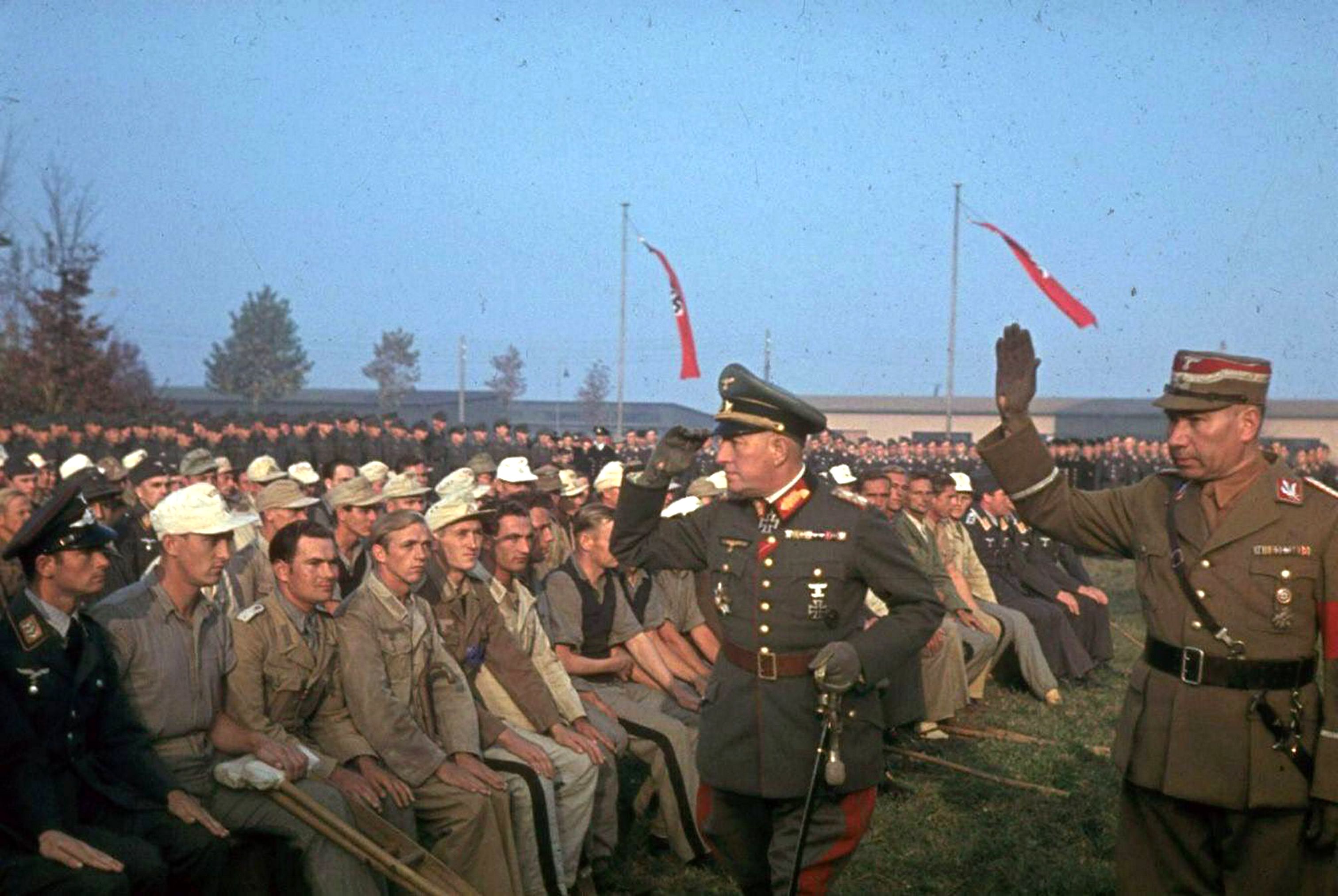 General der Panzertruppe Veiel greeting German POWs of the Afrika Korps, who have returned home after a prisoner exchange with the British. 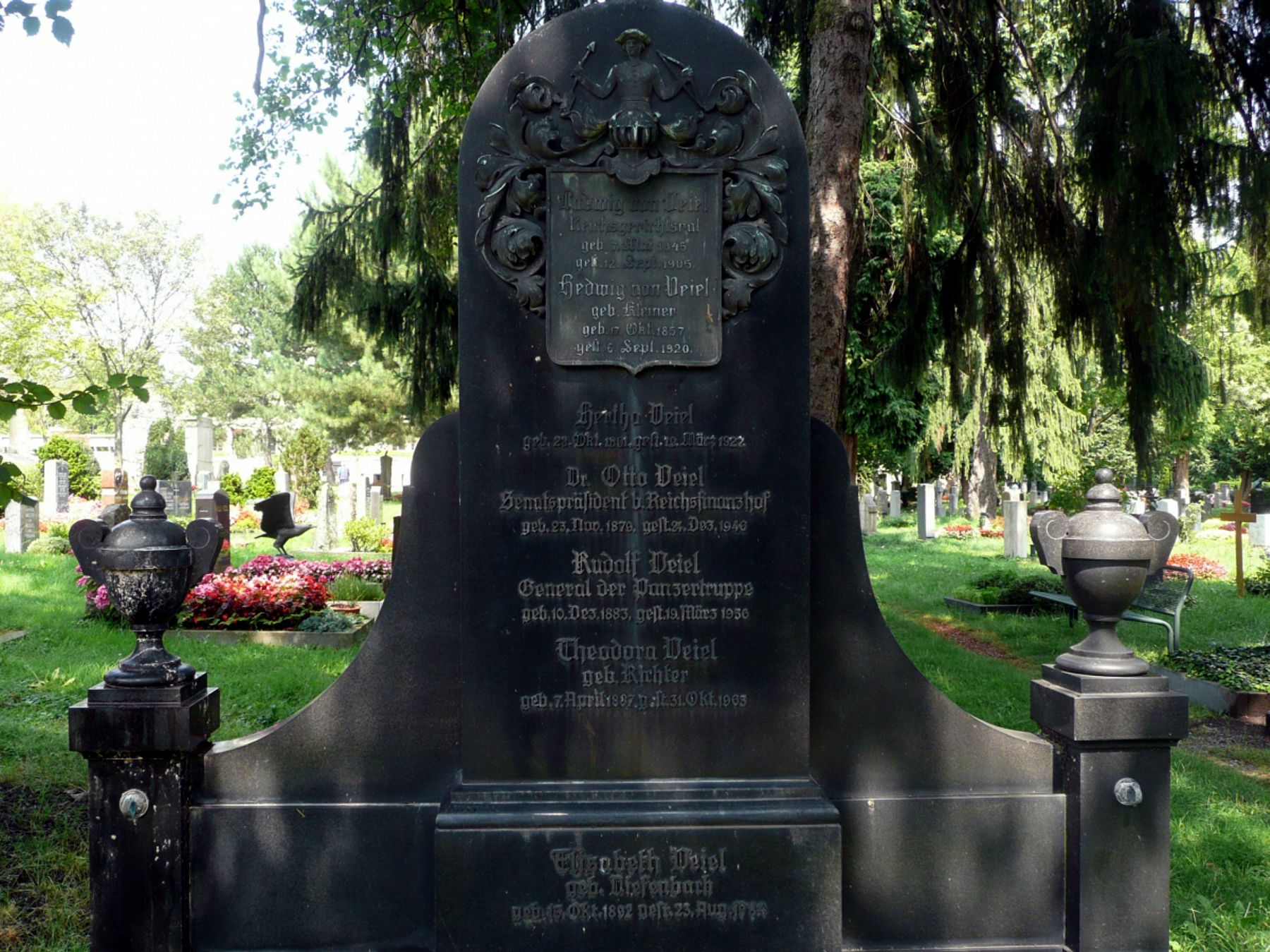 After Veiel's Abitur at the Gymnasium around Easter 1904 he joined the the Ulanen-Regiment “König Karl” (1. Württembergisches) Nr. 19 in Ulm as an officer candidate (Fahnenjunker) and was commissioned to Leutnant 1905. At the beginning of World War I, Veiel was a commander of a Squadron in the Württemberg Reserve-Dragoon-Regiment. He served in this regiment until the end of the war.

From 1 October 1920, he was in the 18th (Saxon) Cavalry Regiment (Reiterregiment 18) of the Reichswehr. From 1 June 1923, Veiel commanded the 2nd Squadron of the 10th (Prussian) Cavalry Regiment where he was promoted to Major on 1 February 1927. In the same year, Veiel became an adjutant in 3rd Cavalry Division. He stayed in this division as an adjutant until 1 April 1931 when he became an Oberstleutnant.

From 1 November 1932 to 1 October 1935, Veiel commanded the 18th Cavalry Regiment. He then commanded the 2nd Rifle Brigade (2. Schützenbrigade) until 1 February 1938 when he was given command of the 2nd Panzer Division, serving in the Sudetenland and in Austria, when it joined the German Reich.

In the early stages of World War II, as commander of the 2nd Panzer Division, Veiel played a distinguished role in the Poland campaign in 1939, during the Western campaign in 1940, during Yugoslavia and Greece (Balkanfeldzug) in 1941, and of the Soviet Union in 1941. On 3 June 1940, for his achievements as a divisional commander, Veiel was awarded the Knight's Cross of the Iron Cross. The following wartime excerpt (dated 30.08.1940) describes why Veiel received the Knight’s Cross…

“Generalleutnant Rudolf Veiel broke through the Belgian border fortifications with his Panzer-Division and then forced a crossing over the Maas river north of Sedan. Thereafter his troops succeeding in breaking through to the Channel coastline in the direction of Boulogne under his outstanding personal leadership.”

Since the 19th February 1942 he led the XXXXVIII. Armeekorps (48th), later known as the XXXXVIII. Panzerkorps. On 1 April 1942, after the German defeat at Moscow, Veiel became General der Panzertruppe. After 28 September 1942, Veiel was made Chief of revitalization in the Headquarters of the Army Group Center (Kommandierender General im Auffrischungsbereich Mitte). He continued in this position until 6 June 1943.

"On 1 September 1943 I took over from my predecessor, General der Infanterie Osswald, command of the Deputy Army Area V and was therewith simultaneously commander in Wehrkreis V and in Alsace. On 15 April 1945 I gave up the command over the Wehrkreis and Alsace to General der Artillerie Felzmann."

And yet most searches on Google say that Veiel was relieved of command of Wehrkreis V because of his behaviour on 20 July and replaced by Hans Schmidt. This is not accurate, although Generalleutnant Wilhelm Burgdorf had planned to place him in the Führerreserve of the OKH around 30 September 1944 and to dismiss him afterwards because of age. The Reichsführer-SS and Chief of Army Equipment and Commander of the Replacement Army (Chef der Heeresrüstung and Befehlshaber des Ersatzheeres) informs that:

"The commander of Military District V, General der Panzertruppe Veiel, exactly like many other deputy commanding generals, received the orders of the traitors von Witzleben and von Stauffenberg in the night of 20th to the 21st of July 1944. According to him [Veiel], he initially tried to clarify the situation in Berlin, however didn't attempt to do anything else. Especially, he omitted to inform the Gauleiter. Later – I do not know the exact time – he rightly reported his intended political advisor from Karlsruhe, the lawyer [and member of the] Centre Party Frank [Reinhold Frank, 1896–1945, one of the conspirators] to the Geheime Staatspolizei Gestapo so that he could be arrested. I cannot assess if and to what degree the General's conduct was culpable. However, I feel obliged to report the aforementioned. According to my experience, General Veiel is an unpolitical soldier, and although he is no opponent of National Socialism, he is no advocate either. General Veiel never neglected cooperation with the Party authorities and myself. I can even say the opposite, that the General was keen to be on the best possible terms with the Party."

On 16 April 1945 he was put in the Officer Reserve (Führerreserve) of the Army High Command (Oberkommando des Heeres or OKH). After World War II, Rudolf Veiel spent two years in American captivity. On 12 May 1947, he was released and returned home to his family.

General der Panzertruppe a. D. Rudolf Veiel died on 19 March 1956 in his hometown of Stuttgart and was buried in the family grave on the cemetery "Pragfriedhof"; final resting place: section (Abteilung) 34, row (Reihe) 11, grave (Grab) 1.

Rudolf was the son of the Imperial Judicial Council (Reichsgerichtsrat) at the Reichsgericht in Lepzig (III. Zivilsenats Leipzig) Ludwig Alfred von Veiel (1845–1905), who was also a member of the Reichstag. His mother was Hedwig von Veiel, née Kleiner (1857–1920). Rittmeister Veiel married on 6. October 1916 his fiancée Elisabeth Diefenbach. They had two children, the daughter was born 1917, the son 1919.