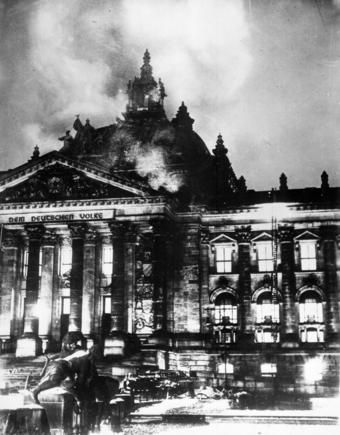 The Reichstag fire was an arson attack on the Reichstag (Parliament) building in Berlin on 27 February 1933. Marinus van der Lubbe, a Dutch Communist, was caught at the scene, tried for the crime, found guilty, and executed in 1934.

The Reichstag fire, as well as factors such as ongoing violence involving among others Communists and fear of a Communist coup and rule of terror, caused the issuing of the "Reichstag Fire Decree" ("Decree of the Reich President for the Protection of People and State") and three weeks later the Enabling Act which suspended many civil liberties and was used for purposes such as suppressing the Communists. In the following months the NSDAP became the only legal party.

There has been much speculation on whether Van der Lubbe acted alone (today the mainstream view) or was involved in a conspiracy, such as a National Socialist false flag conspiracy or a Communist/Soviet conspiracy.