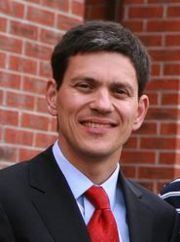 David Wright Miliband MP, (born July 15, 1965) was the Jewish Secretary of State for Foreign and Commonwealth Affairs and Member of Parliament for the constituency of South Shields in the United Kingdom.[1] He is the brother of Ed Miliband. Following the latter's election as leader of the Labour Party, David left UK politics and went to live and work in New York for Jewish charities.

David's paternal grandmother, Renia (later known as Renée), had also moved to Brussels, where she first met Sam, with the couple marrying in 1923[3]. Hitler’s invasion of Belgium in May 1940 as part of the Western Offensive split the Miliband family in half: Ralph and father Samuel fled to England, while Ralph's mother Renée and baby sister Nan stayed behind for the duration of the war. They were not reunited until 1950.[4]

Miliband studied politics at universities in England and the US, and started his career as a policy analyst at the Institute for Public Policy Research. At 29, Miliband became Tony Blair's Head of Policy whilst the Labour Party was then in opposition and was a major contributor to Labour's manifesto for the United Kingdom 1997 General Election which brought the party to power. Blair made him head of the Prime Minister's Policy Unit from 1997 to 2001, following which Miliband was elected to parliament for the north-east England seat of South Shields.

Miliband spent the next several years in various junior ministerial posts in the British government, including at the Department for Education and Skills, before becoming Environment secretary. His tenure in this post saw climate change consolidated as a priority for Labour policymakers. On the succession of Gordon Brown as Prime Minister, Miliband was promoted to Foreign Secretary, at 41, the youngest person to hold the position in 30 years.

Miliband is a social democrat and seen as Blairite in terms of advocating choice in public services. He is generally believed to be on the left of the New Labour project, which would be natural for a Marxist, advocating more action on the environment, higher public spending and a more pro-European foreign policy.