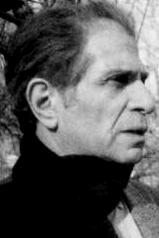 Ralph Miliband (7 January 1924 – 21 May 1994) was a notable Marxist Jewish propagandist, author, and sociologist. His two sons, David & Ed, became socialist Members of Parliament in the UK.

As Adolphe Miliband, he was born in Brussels of Polish-Jewish émigré parents. His parents lived in the Jewish quarter of Warsaw before his father, Samuel Miliband, joined the Red Army in the Polish–Soviet War.[1][2]

Miliband and his father were forced to evacuate Belgium in 1940 as Hitler's army moved westwards through the country, and managed to catch a boat for Kent, England at Ostend. He and his father entered the UK illegally on forged papers. Once in the UK he changed his forename name to Ralph. He was married to Marion Kozak, and their two sons, David and Ed Miliband, became socialist Members of Parliament for the Labour Party. Both also became government ministers and so members of the British Cabinet under Prime Minister Gordon Brown. Ed was subsequently elected leader of the Labour Party.

He is buried in Highgate Cemetery, London, close to his beloved Karl Marx and many celebrated left-leaning minds of the 20th Century.

Studies in the UK

While a student at Acton Technical College (now Brunel University) in West London, he became an active Marxist, and in 1941 was awarded a place at the London School of Economics (LSE), where he studied under the Jewish socialist Harold Laski. At this time the LSE was evacuated to Cambridge University. However conscription meant he had to serve three years' service in the Royal Navy during World War II, following which Miliband resumed his studies at the LSE and graduated with a First in 1947. After obtaining a Leverhulme research scholarship to continue further studies at the LSE, Professor Laski arranged for Miliband to teach at the Roosevelt College (now Roosevelt University) in Chicago. In 1949 he was offered the post of an Assistant Lectureship in Political Science back at the LSE.

Miliband was on the critical British New Left during the 1950s, alongside the likes of E.P. Thompson and John Saville, with whom he launched the New Reasoner and the New Left Review. He also set up the Socialist Register with Saville in 1964 and was influenced by the American sociologist C. Wright Mills, of whom he was a friend. He left the LSE in 1972, having found himself torn by the controversies which had beleaguered the institution over the preceding few years, to take up the post of Professor of Politics at the University of Leeds. The time at Leeds was an unhappy period for Miliband, and he subsequently chose to assume several posts in Canada and the US.

Ralph Miliband wrote several books, including Marxism and Politics, published by the Oxford University Press in 1977.

Opposition to the Vietnam war and criticism of the Labour Party

Miliband was passionately opposed to the American war in Vietnam. In 1967 he wrote in the Socialist Register that "the US has over...a period of years been engaged...in the wholesale slaughter of men, women and children, the maiming of many more" and that the United States' "catalogue of horrors" against the Vietnamese people was being done "in the name of an enormous lie".[3]

In the same article, he attacked Harold Wilson for his defence of the United States' action in Vietnam, describing it as being the "most shameful chapter in the history of the Labour Party". He went on to say that the US Government "made no secret of the political and diplomatic importance it attached to the unwavering support of a British Labour Government".

In 1961, Ralph married the Polish-born Marion Kozak,"a woman in her mid-20s with questioning eyes and disobedient hair"[4], who was one of his former students at LSE. They had two sons, David in 1965 and Edward in 1969.

Ralph Miliband died in London in 1994. His son David Miliband was elected Labour MP for South Shields in 2001. From 2006 to 2010 he served in the cabinet, latterly (from 2007) as Secretary of State for Foreign and Commonwealth Affairs. His younger brother, Ed Miliband, was elected a Labour MP for the Doncaster North seat in 2005. From 2007 to 2008 he served as Minister for the Third Sector in the Cabinet Office and had the task of drafting Labour's manifesto for the 2010 general election. In October 2008 Ed was promoted to the position of Secretary of the newly-formed Department of Energy and Climate Change (DECC). "The sadness of some of Ralph's circle at Ed and David's divergence from their father is considerable."[4]

Following the Labour Party's defeat in the 2010 General Election and Gordon Brown's subsequent resignation as Prime Minister and Labour Party leader, both David and Ed declared that they would run for the leadership of the Labour Party.[5] Ed was elected leader, and David left politics and went to work for Jewish charities in New York.