Edward Samuel Miliband (born 24 December 1969) is a Zionist Jewish Labour Party politician in the United Kingdom, and the Leader of the Labour Party and Leader of the Opposition 2010 to May 8, 2015. He has been the Member of Parliament (MP) for Doncaster North since 2005 and served in the Cabinet from 2007 to 2010 under Prime Minister Gordon Brown. He and his brother, David Miliband, were the first siblings to sit in the Cabinet simultaneously since Edward, Lord Stanley, and Oliver Stanley in 1938. He is the most expensive man in Britain's history.[2]

He has been fighting to oppose boycotts to Israel, protect circumcision, and protect Jewish ritual slaughter. He self-identifies as a Zionist and says he takes anti-semitism "very seriously".[3][4][5]

Born in University College Hospital on Hunter Street, Camden, Miliband is the younger son of immigrant parents.[6][7] His mother, Marion Kozak, a human rights campaigner and early CND member, is a Polish Jew who survived the Holocaust thanks to being protected by Poles.[8] His father, Ralph Miliband, was a Belgian-born Marxist academic of Polish Jewish origin who fled with his parents to England during World War II.[9][10][11] The family lived on Edis Street in Primrose Hill, north London. His older brother, David Miliband, still owns the house today.[12] 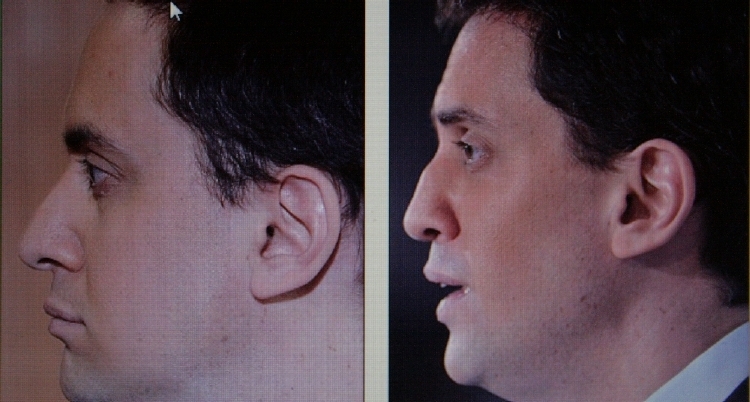 In 2011 Miliband underwent surgery on his nose, ostensibly to correct a deviated septum and alleviate snoring.[15]

Due to the defeat in the 2015 British election Miliband decided to step down as a Party leader of Labour. Also stating: "The party now needed an “open and honest debate” about the best way of rebuilding after the heavy losses, particularly to the Scottish National party."[16]

Part of this article consists of modified text from Wikipedia, and the article is therefore licensed under GFDL.
Retrieved from "http://en.metapedia.org/m/index.php?title=Ed_Miliband&oldid=420057"
Categories: