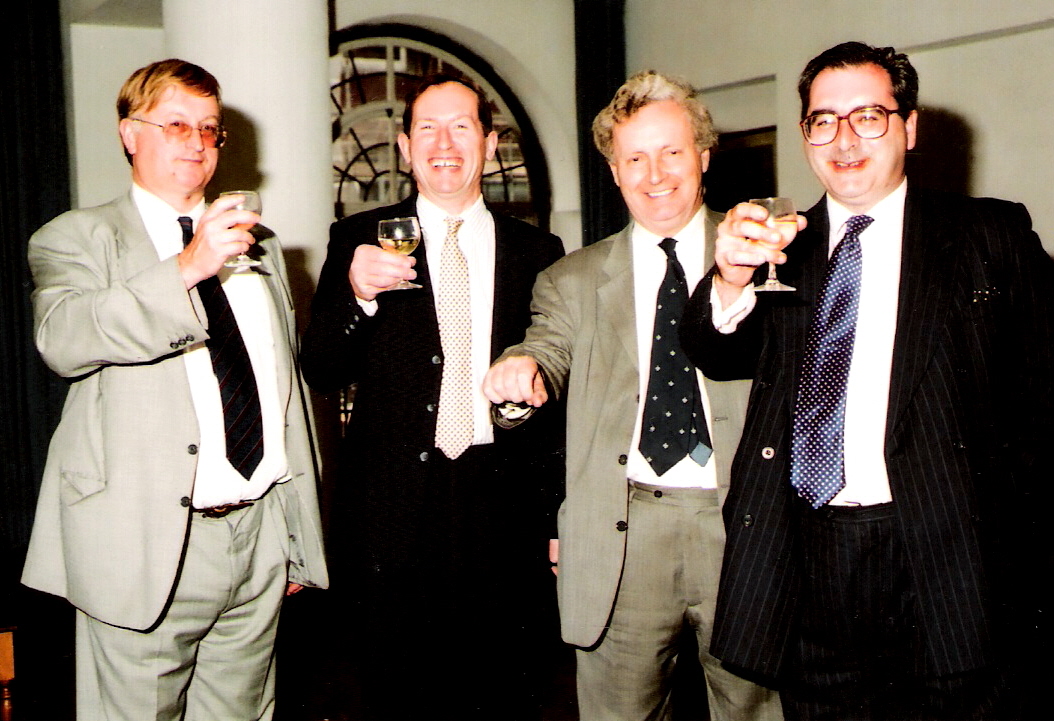 The Conservative Democratic Alliance (CDA) was a United Kingdom political pressure-group which referred to itself as the "authentic voice of conservatism".[1] It was wound up in December 2008.

The CDA was formed mostly by disaffected members of the Conservative Monday Club, another right-wing pressure group, who disagreed with the club's dormancy and their limp response to the Conservative Party's severing links with the Club in 2001.[2] The Daily Telegraph described the CDA as "a hardline offshoot of the Monday Club"[3] and as "ultra-right" by the Commission for Racial Equality.[4]

The group's Founder and Chairman was Michael Keith-Smith (1953-2010), who joined the Conservative Party in 1970, and the Monday Club the following year[5] serving on its Executive Council, 1986 - 1993. Disillusioned with the leftward drift of the Conservative Party, in 2005 he stood as the United Kingdom Independence Party (UKIP) candidate at Portsmouth North, coming third and beating the Conservative candidate into fourth place.

Millson and Lauder-Frost are both former active members of the Conservative Party, the Monday Club's Executive, and the Western Goals Institute, and were founder-members of the Traditional Britain Group, of which Lauder-Frost remains a Vice-President.[11][12]

On June 27, 2002, The Daily Telegraph carried a letter from the CDA, signed by Mike Smith, attacking the Conservative Party and its then Chairman Francis Maude for "the sleaze, double-dealing, arrogance, incompetence, Europhilia, indifference and drift with which the party is still associated. Voters", he said, "deserve a real alternative to Blairism and his 'straight kinda guy' chicanery. Mr. Maude and his C-Changing Tories are incapable of providing it." ("C-Change" was a now-defunct Tory modernising pressure group headed by Maude.)

The CDA often criticised free trade and liberal economics as well as the Americanisation of the United Kingdom, both of which it perceived to be part and parcel of Thatcherism. This distinguished the CDA from Iain Duncan Smith's Conservative Party leadership, which CDA members criticised as neoconservative. The CDA was also fervently opposed both to the European Union and to close links with George W. Bush's administration and British involvement in the Iraq and Afghanistan wars.

The CDA held "a packed meeting of right-wingers"[13] in a hotel at the Conservative Party conference in Bournemouth on October 11, 2002, chaired by Mike Smith, who accused Conservative Party Chief Whip David Maclean of gagging his party's MPs over the EU, declaring him "a disgrace to the party."[14] The meeting was addressed by Roger Knapman, then leader of the United Kingdom Independence Party; Ashley Mote, then a UKIP MEP and author of Overcrowded Britain - Our Immigration Crisis Exposed (2004);John Gouriet, a founder with Norris McWhirter of the Freedom Association; Derek Turner, editor of Right Now! and the Quarterly Review magazines; Sam Swerling, a consultant solicitor, Law Lecturer and former Monday Club chairman, who described Theresa May, M.P., as "a third-rate operator", and Adrian Davies, then chairman of the Freedom Party, a barrister-at-law, who said "the ideal candidate for the Conservatives now was a black, one-legged lesbian."[15]

The CDA held another fringe meeting on October 6, 2004 at the Conservative Party Conference, again in Bournemouth, in tribute to Enoch Powell.

Fantasy stories about the CDA began to appear, including that they planned to field its own candidates against Conservative MPs with small majorities at the 2005 General Election,[16]. Of course this was ridiculous as the CDA was not a registered political party. They did however launch an anti-Oliver Letwin campaign in the latter's constituency of West Dorset, distributing leaflets carrying a photo of him with an orange Sikh turban which had had donned during a visit to that community. Letwin was then his Party's Treasury Spokesman, whom the CDA described as "simply not a Conservative at all". In the event, Letwin held his safe seat in the 2005 General Election. Letwin, who is Jewish, also worked for Rothschild's Bank in the City of London.

The CDA's June 2005 Summer Dinner in Fleet Street, London, was addressed by the 'metric martyr', Neil Herron, who led the campaign against the adoption of the metric system in the UK. The previous year Herron had stood as an Independent candidate in the European Parliament Elections for North-East England, gaining almost 40,000 votes, over 5.1%.[19]

On April 16, 2007, the CDA hosted the Baldwin Society's Dinner at the Royal Overseas League in London's St.James's. Lauder-Frost made the speech of thanks to their guest-of-honour, Lord Norman Tebbit, which was well received.

The CDA produced a regular bulletin, and maintained a website with discussion forums (now defunct).[20]

In 2002 an anti-Conservative Party advertisement for the CDA was published in Right Now! magazine, containing the statement that the CDA was "horrified by Tory frontbench spokesmen advocating gay lifestyles and New Labour ideas". Andrew Hunter MP withdrew his patronage from the magazine due to the appearance of the advert, saying that he was 'appalled' by the "antics" of the CDA and that he no longer wanted to be associated with the magazine "in any way".[21][22]

Also in 2002, Iain Duncan Smith then expelled CDA Chairman Michael Keith-Smith from the Conservative Party[23] apparently citing a newspaper article which stated the CDA was threatening to stand candidates against Conservatives.[24] Mike Smith immediately issued a Writ claiming Breach of Natural Justice and the party was obliged to re-admit him to membership.[25] Soon afterwards, however, he resigned from the Conservative Party, having made his point.

During 2008 it was reported that Mike Smith was unwell. He bizarrely changed his stance and announced on the CDA's forum that he had rejoined the Conservative Party: "After wide-ranging initial doubts, Mike Smith has now enthusiastically accepted David Cameron's reform agenda and returned to the Conservative Party from UKIP" and he began to urge the CDA committee to adopt the same idea.

As a result, the CDA Committee met in September 2008 and agreed that it would be best if the CDA was wound up. In December, Mike Smith announced on the CDA forums that the CDA would be disbanding as he himself had now come to support the Tories again and wanted to campaign for them in the run-up to the 2010 general election and circulated a letter to all members and supporters saying that the CDA membership lists would be transferred to the Traditional Britain Group and urging them to support the group.[26]