From Metapedia
(Redirected from Thatcherism)
Jump to: navigation, search 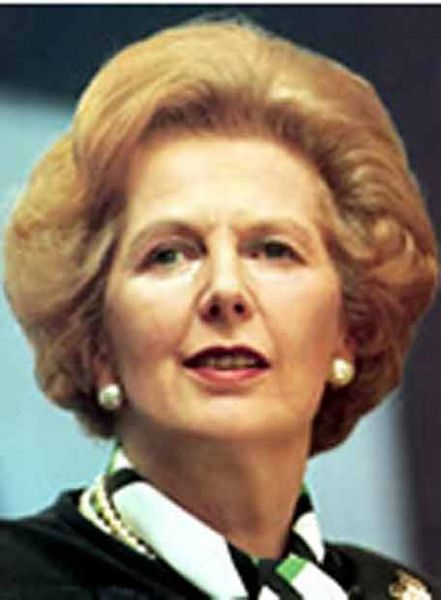 Margaret Hilda Thatcher, Baroness Thatcher (née Roberts; 13 October 1925 - 8 April 2013) was a British neo-liberal capitalist politician, who was Prime Minister of the United Kingdom from 1979 to 1990 and Leader of the so-called Conservative Party from 1975 to 1990. In 1982, her leadership was key for the British to win the Falklands War against Argentina. However her support of the project of neoliberalism (spurred on by the ideologue Keith Joseph and Milton Friedman[1]) which led to the asset stripping and de-industrialisation of the country, her unwillingness to support more grammar schools and other aspects was very unpopular in some sectors.

Born in Grantham in Lincolnshire, England, she went on to read Chemistry at Somerville College, Oxford. She was selected as Conservative candidate for Finchley in 1958 and won the seat in the general election the following year. Upon the election of Edward Heath in 1970, Thatcher was appointed Secretary of State for Education and Science. In 1974, she backed Sir Keith Joseph for the Conservative party leader, but after falling short he dropped out of the race. Thatcher entered herself and became leader of the Conservative party in 1975. As the Conservative party maintained leads in most polls, Thatcher went on to become Britain's Prime Minister in the 1979 General Election.

Thatcher's tenure as Prime Minister was the longest since that of Lord Salisbury and was the longest continuous period in office since the tenure of Lord Liverpool who was Prime Minister in the early 19th century.[2] She was the first woman to lead a major political party in the UK, and the first of only three women to have held any of the four great offices of state. Among other things, she defiantly opposed the Soviet Union, and her tough-talking rhetoric gained her the nickname the "Iron Lady".[2] She had a life peerage as Baroness Thatcher, of Kesteven in the County of Lincolnshire, which entitles her to sit in the House of Lords.

Thatcher died in London on the morning of 8 April, 2013, after suffering a stroke. In accordance with her wishes, she didn't receive a state funeral ("Don't waste money on a flypast at my funeral" she stated). Thousands of critics and former miners joined the demonstrators congregated in several cities for celebrating her death. Liberal politician Glenda Jackson criticized Thatcher in the parliament: her "virtues" were "greed and selfishness" she said.

Thatcher’s philo-Semitism went beyond the people she appointed to her government; it had clear political implications as well. She made Jewish causes her own, including by easing the restrictions on prosecuting Nazi [sic] war criminals living in Britain and pleading the cause of the Soviet Union’s refuseniks. She boasted that she once made Soviet officials “nervous” by repeatedly bringing up the refuseniks’ plight during a single nine-hour meeting with Mikhail Gorbachev, “The Soviets had to know that every time we met their treatment of the refuseniks would be thrown back at them,” she explained in her book The Downing Street Years. Thatcher also worked to end the British government’s support for the Arab boycott of Israel. During the Yom Kippur War of 1973, Thatcher criticized Tory Prime Minister Ted Heath’s refusal to supply Israel with military parts or even allow American planes to supply Israel from British airfields. In 1986, Thatcher became the first British prime minister to visit Israel, having previously visited twice as a member of parliament.
—Charles C. Johnson, 2011, Thatcher and the Jews.