The Warsaw Ghetto Uprising was a 1943 Jewish uprising in the Warsaw Ghetto in Poland. The most significant portion of the uprising took place from 19 April until 16 May. It was crushed by German troops under the command of the SS-officer Jürgen Stroop.

The revisionist Robert Faurisson has written a description of the uprising that differs in many ways from the mainstream one. The "insurgents" are stated to partially have been a Jewish mafia, that extorted other Jews in the ghetto, and who resisted the relocation of the ghetto population since it would reduce their financial base as well as their freedom of movement. The intensity of the fighting and numbers involved are stated to be greatly exaggerated in politically correct descriptions. That the suppressing operation took several weeks to accomplish is argued to be due to Himmler having ordered the operation to be carried out very slowly, in order to minimize casualties. Each morning, the troops would enter the ghetto, clear buildings of their residents, and use smoke candles (not poison gas) to drive out the Jews hiding in the air-raid shelters. The buildings were destroyed as they were evacuated. The extensive system of air-raid shelters ("bunkers" in the politically correct descriptions) that complicated the operation is stated to have been built with German assistance, in order to protect the Jewish population from Soviet bomb raids that had started in 1942.[1] 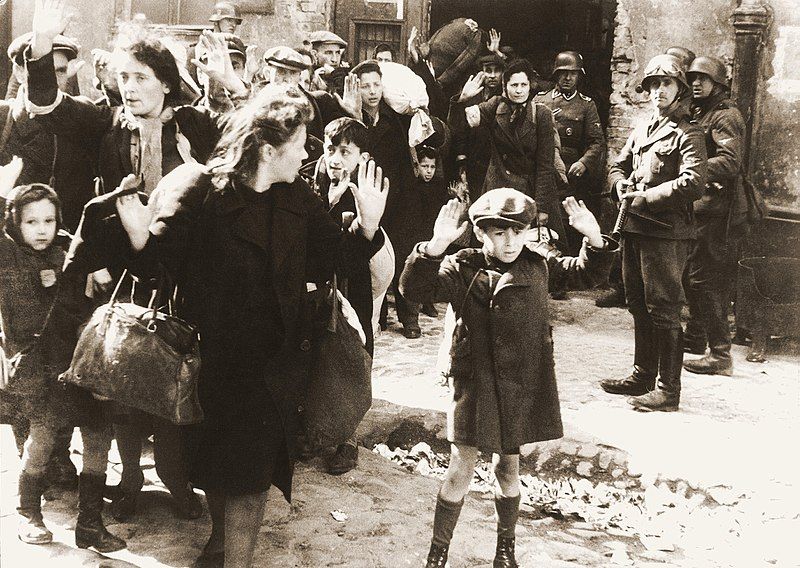 Well-known photo from the Stroop Report. It has often been implied that the boy was soon killed. However, a New York physician, Tsvi C. Nussbaum, has stated that he was the boy and that he and relatives were not killed, but instead deported to the Bergen-Belsen camp. After the war, he migrated to Israel and later to the United States. "Nussbaum’s story has held up under critical examination, and even decades later he still bore a striking resemblance to the boy in the photo."[2]

"Jewish Holocaust historians “who have long considered the photograph a sort of sacred document” were not pleased by Nussbaum’s revelation, reported The New York Times, because they were “convinced that the symbolic power of the picture would be diminished were the boy shown to have survived.”"[2]

The "Stroop Report" is stated to be a report on the uprising, prepared in May 1943 by Jürgen Stroop, the commander of the German forces, for the SS chief Heinrich Himmler. It is sometimes cited as evidence for the politically correct view on the Holocaust. Revisionist have disputed this, with arguments such as the report frequently being mistranslated and misrepresented in politically correct descriptions. One example is regarding the number of Jews killed during and after the uprising. Furthermore, the report does not mention any gassings.[3][4]

Another stated example of gross misrepresentation of the report is in the 1965 verdict of the first Treblinka trial: "The expert Dr. Krausnick stated the following, inter alia: According to the Stroop Report, in the period from July 22, 1942, to October 3, 1942, approximately 310,000 and in the period from January to mid-May 1943 approximately 19,000 Jews were brought in freight trains from the Warsaw Ghetto to Treblinka.” However, the Stroop Report actually reads as follows: “The first large resettlement action took place in the period from 22 July to 3 October 1942. In this action 310,322 Jews were removed. In January 1943 a second resettlement action was carried out by which altogether 6,500 Jews were affected.” Thus, Treblinka is not even mentioned in this passage of the Stroop Report."[3]

The authenticity of the report has also been questioned. One argued possibility is that an original report has been edited for greater propaganda effect.[5][6][7]

Starting on 22 July 1942, according to the Stroop Report and the Jewish Council in Warsaw, many Jews were deported from the Warsaw Ghetto, in order to be resettled (to the east according to the Jewish Council). According to politically correct history, these Jews were killed at locations such as Treblinka. However, in the months that followed, letters and postcards that were addressed to relatives of deported Jews arrived in the Warsaw Ghetto, from Bialystok, Pinsk, Bobruisk, Brzezc, Smolensk, Brest Litovsk, and Minsk. Non-revisionists claim that such letters and postcards were forged under duress at Treblinka, but revisionists argue that not a single one of the self-described survivors of Treblinka has made claims of this kind.[3]

On 21 August 1942, Goebbels's diary stated that "The responsible Higher-SS leader reported to me on the conditions in the [Warsaw] ghetto. The Jews are now in large part evacuated (evakuiert) and established in the East."[8]

See also Korherr Report: Samuel Crowell on Crowell arguing that various sources support that Jews captured in Warsaw were sent to camps in the Lublin province.

Claimed associations with the creation of Israel

Various claimed associations between the violent uprising and the violent creation of Israel have been made, such as regarding the dates of Holocaust Memorial Days and in the influential 1978 Holocaust miniseries.