The Nation of Islam (NOI) is a Black nationalist religious movement. Often referred to as Black Muslims the group differs in several way from traditional Islam. 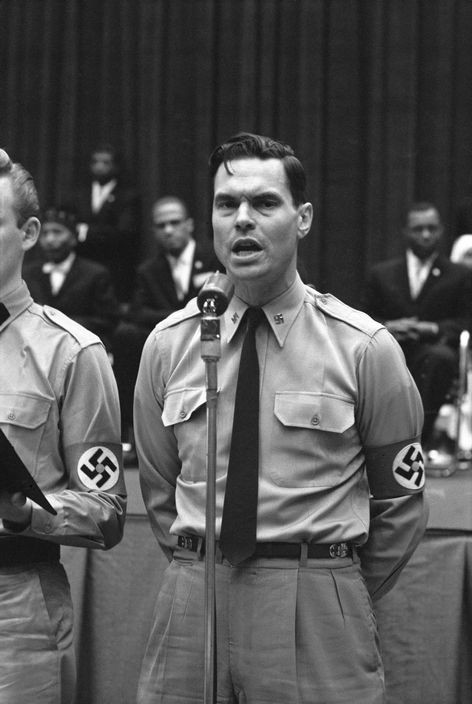 George Lincoln Rockwell at a Nation of Islam meeting in 1962. Behind him are Elijah Muhammad and Malcolm X.

The organization traces its origin to Noble Drew Ali, originally Timothy Drew, who founded the Moorish Science Temple of America in 1913. He produced a new sacred text, The Holy Koran, that bears little resemblance to Koran and was based on his limited knowledge of Islam and on spiritualist teachings.[1] He died mysteriously while there were internal conflicts. Among other unusual beliefs, the organization claimed that all Blacks are of Moorish (Muslim North Africans) origin.

Wallace Fard Muhammad, a peddler, claimed that he was Noble Drew Ali reincarnated. He preached that Blacks must prepare for an inevitable race war and that Christianity was the religion of slaveowners. Accordingly, he gave his followers Arabic names to replace those that had originated in slavery. Fard offered blacks a credo of moral and cultural superiority to Whites. In 1934, after problems within the organization, he disappeared without a trace. Members of the movement believe Fard to be the incarnation of Allah and his birthday is observed as Saviour’s Day.[1][2]

Elijah Muhammad was the next leader. During World War II, he supported avoiding the draft and was jailed (1942–46). He supported Black separatism, but was also vehemently anti-White, later somewhat lessening this and stressing Black self-help. He believed that the White race was created by Yakub, a Black scientist, and that Allah had allowed this devilish race to hold power for 6,000 years. He was assassinated in 1975.[3][4]

Malcolm X was initially a member of the Nation of Islam.

Warith Deen Mohammed was named leader after Elijah Muhammad, his father. He changed the organization towards traditional Islam.

After he was not named leader after Elijah Muhammad, Louis Farrakhan led a breakaway organization, also called the Nation of Islam, and did not change it towards traditional Islam.

More generally, there have been many internal conflicts and splits into different organizations, some now defunct. A notorious splinter group was the Death Angels, which required the murder of several "blue-eyed white devils" for membership, causing the Zebra murders of Whites.

The Nation of Islam has been critical of Jewish influence from its earliest days. While often blaming a supposed White supremacist political structure for Black problems, the NOI has frequently criticized an argued role of Jewish crime and big business in Black communities. At the time of its emergence during Prohibition, Detroit was inundated with bootleg liquor provided by Samuel Bronfman and Lewis Rosenstiel. NOI's converts, instructed in the Islamic precept of abstinence from alcohol, became a major social force opposing Bronfman's crime empire (the Bronfman empire only grew stronger when the end of Prohibition rendered its activities legal, and Samuel's son Edgar Bronfman succeeded him as CEO of Seagram, and become leader of the World Jewish Congress).[5]

Louis Farrakhan also speaks on Jews and the slave trade.

Rap music often condones and promotes the Nation of Islam, and many well-known rap MCs have joined its ranks.