Michael Wittmann (b. 22 April 1914 in Vogelthal, Landkreis Neumarkt in der Oberpfalz; ⚔ 8 August 1944 near Caen, France) was a German Waffen-SS tank commander during the Second World War. Wittmann would rise to the rank of SS-Hauptsturmführer (captain) and was a Knight's Cross of the Iron Cross holder. The circumstances behind Wittmann’s death have caused some debate and discussion over the years, but it had been historically accepted that Trooper Joe Ekins, the gunner in a Sherman Firefly, of the English 1st Northamptonshire Yeomanry was his killer. However, in recent years, some historians have suggested that members of the Canadian Sherbrooke Fusiliers Regiment may have been responsible instead. 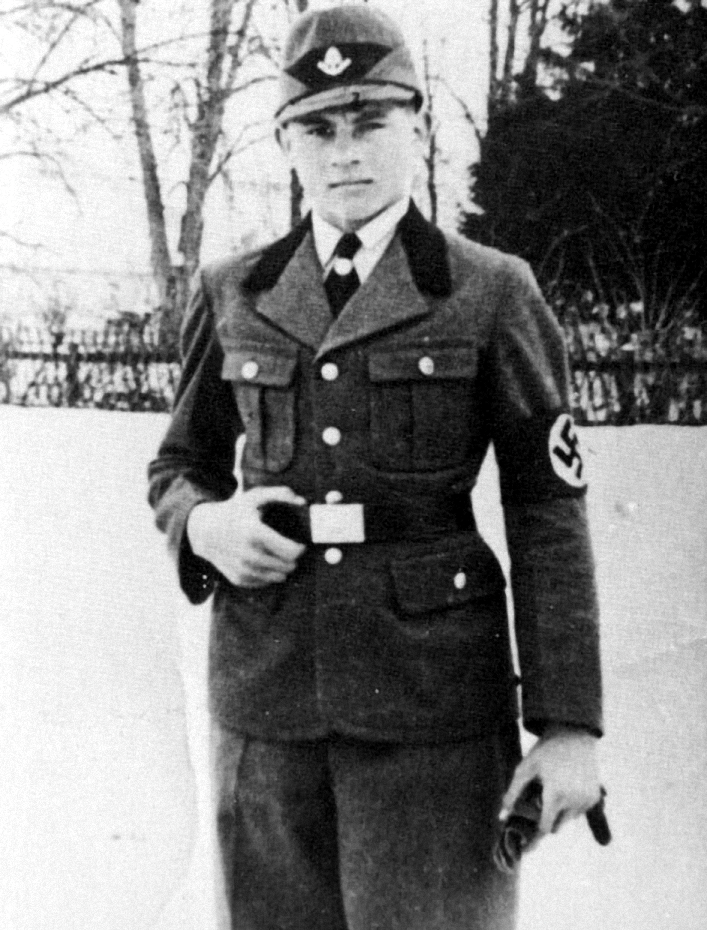 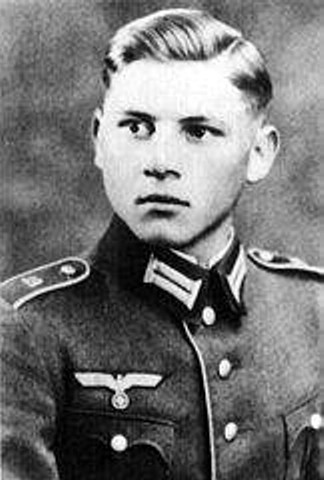 Wittmann as a young soldier of the Wehrmacht, 1935 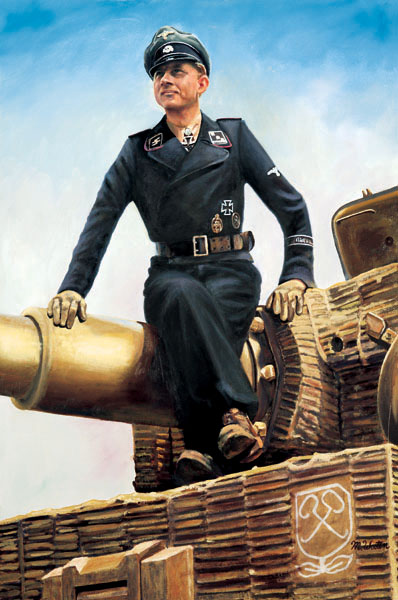 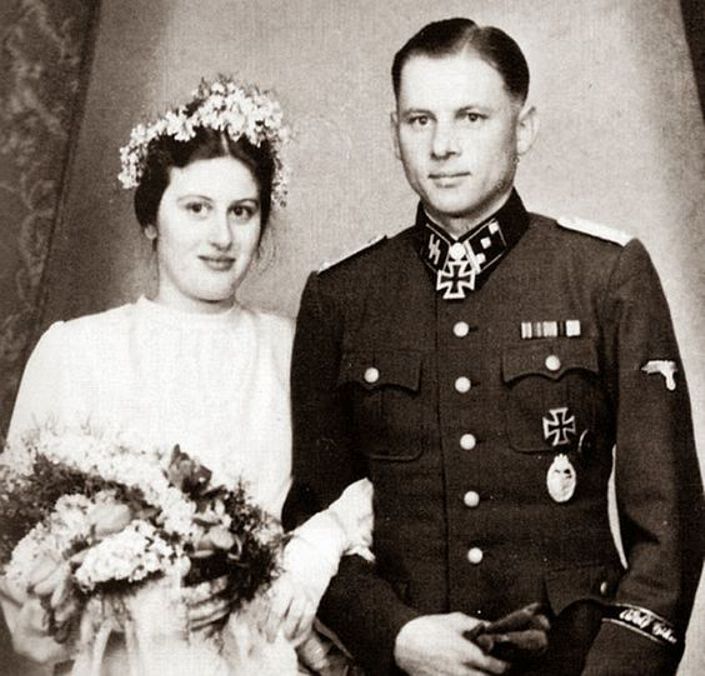 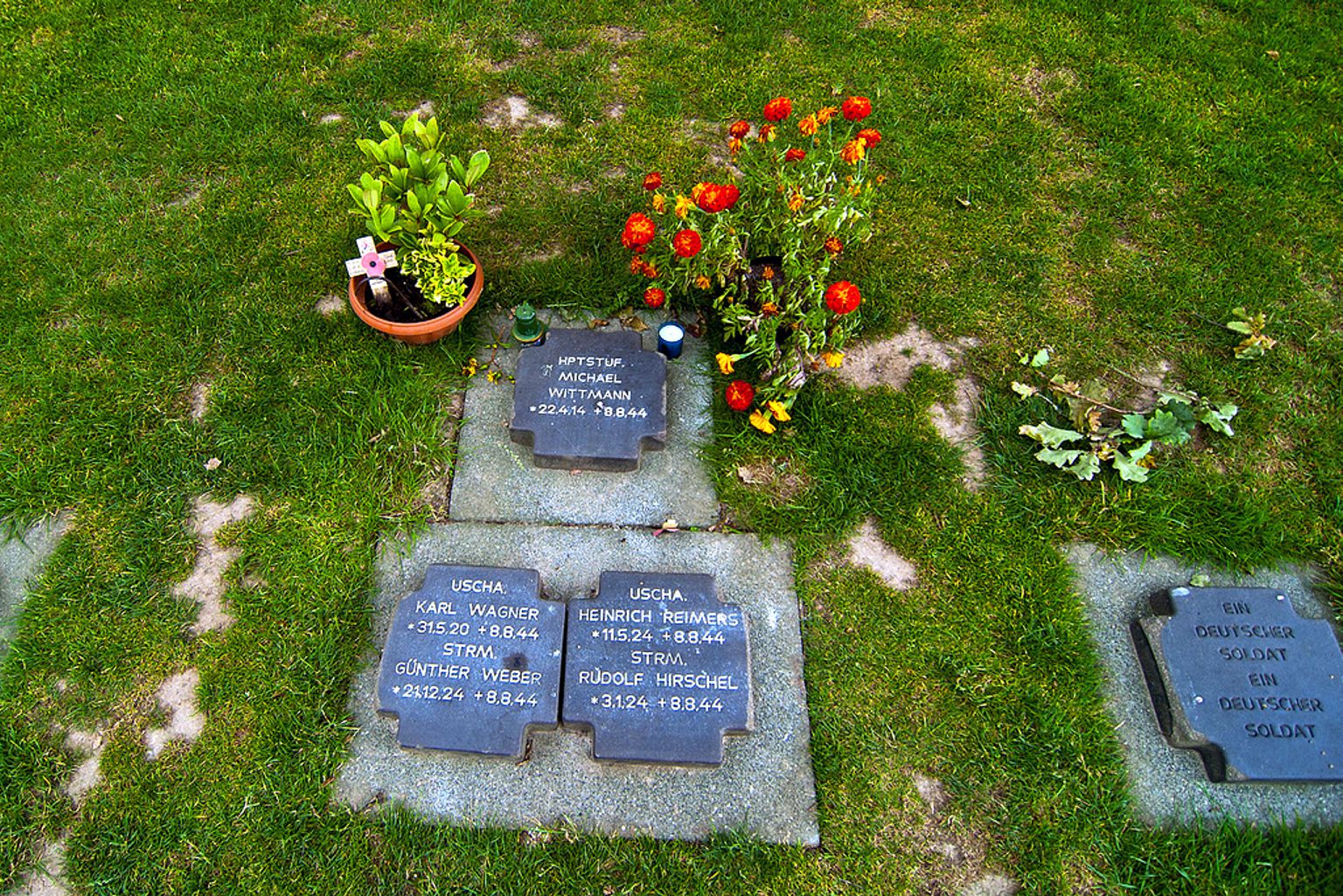 Michael Wittmann's grave along with those of his tank crew

Michael Wittmann was born in the village of Vogelthal, near Dietfurt in Bavaria's Upper Palatinate on 22 April 1914 as the son of a farmer. In February 1934 he joined the Freiwilligenr Arbeitsdienst (FAD), forerunner of the Reichsarbeitsdienst (RAD). On 30 October 1934 he joined the 10 Company/Infanterie-Regiment 19 of the Reichswehr in Freising near München. In March 1935 the Reichswehr was formed into the Wehrmacht. On 30 September 1936 his two-year service as a draftee ended. After two weeks of vacation he worked, beginning on 17 October 1936, for a short time in railway construction (Gleisbauarbeiter) in Ingolstadt (Bavaria)

Wittmann joined the Schutzstaffel (SS) on 1 November 1936 as a SS-Anwärter (SS-Nr. 311.623), was assigned to the 1st Sturm/92nd SS-Standarte in Ingolstadt, was transfered to the SS-Verfügungstruppe (SS-VT) on 1 April 1937 and was assigned to the 17th Company/Leibstandarte SS Adolf Hitler on 5 April 1937. On 1. March 1938 he joined the NSDAP (Mitgliedsnummer: 5,508,244), participated in the accession of Austria to National Socialist Germany on 13 March 1938 and the liberation of the Sudetenland on 1 October 1938.

He was credited with the destruction of 138 tanks and 132 anti-tank guns, along with an unknown number of other armoured vehicles, making him one of Germany's top scoring panzer aces, together with Johannes Bölter, Ernst Barkmann, Otto Carius and Kurt Knispel who was the top scoring ace of the war with 168 tank kills. Wittmann is most famous for his ambush of elements of the British 7th Armoured Division, during the Battle of Villers-Bocage on 13 June 1944. While in command of a single Panzerkampfwagen VI Tiger he destroyed up to 14 tanks and 15 personnel carriers along with 2 anti-tank guns within the space of 15 minutes.

Even though Wittmann showed enthusiasm and ambition to be a tank driver, due to his rank and inexperience (and despite his talent), he was attached to a recon unit within the 1st SS-Panzer Division. He was given command of an armored car Sd.Kfz.232 (a six-wheeled heavy armored car). As the Liebstandarte SS was initially formed as Hitler’s personal bodyguard unit, its tank divisions were considered elite. The unit comprised several future tank aces such as Hannes Philipsen and Helmut Wendorff. Wittmann earned their trust and respect, even though he was only operating as a recon vehicle driver. Wittmann went through the Polish campaign as part of the 17th Panzer Scout Company of the Liebstandarte SS. After Poland, he received additional training in Berlin and was transferred to the SS-Sturm-Batterie (assault gun battery – Sturmartillerie) of LSSAH, equipped with Sturmgeschutz III assault guns. It was from this point on that Wittmann showed his miraculous skill which would launch him into legend. After a successful campaign in the Balkans, where Wittmann proved his value driving a Stug III (especially in Greece), his division was transferred to assist the German troops on the Eastern Front. Only a month into the campaign, he was awarded the Iron Cross Second Class for superb service against enemy tanks. Wittmann was wounded but refused to abandon the battleground, which won him a Wound Badge. His Iron Cross became First Class after knocking out 6 Soviet tanks in a single engagement. He advanced through the ranks and was offered additional training after which he was finally introduced to his weapon of choice ― the PzKpfw VI Tiger. He returned to the battlefield in 1943, right on time to participate in the biggest tank battle in history ― The Battle of Kursk, or as the Germans called it ― Operation Citadel. His death count began to rise. Wittmann destroyed 12 Soviet T-34 tanks in the first day alone. On this occasion, he rescued Helmut Wendorff and his squad who were pinned down by the Red Army armor. This was on July 5, 1943. The battle which included the bloody battle for the city of Kharkov ended on July 17 and Wittmann’s score included 30 tanks and 28 anti-tank guns. Michael Wittmann wasn’t the only one contributing to the success and superiority of German armor ― he was always surrounded by a hand-picked top notch crew.

Even though he changed a number of crew members, he spent most of the war accompanied by his aim-gunner, Balthasar “Bobby” Woll. Woll was famous in the German Army, as much as Wittmann himself. Woll’s ability to shoot targets while the tank was moving at high speed was astonishing. Wittmann and Woll proved to be quite a team. They spent most of their time on the Eastern Front, acquiring kills on a daily basis. The two were close friends and Woll even served as a witness to Wittmann’s wedding. Balthasar Woll was awarded Knight’s Cross of the Iron Cross in 1944. Soon after, he was given command over a tank of his own. He was seriously wounded in 1945, in France when his tank squadron was bombarded by Allied planes and decimated. Woll was in a hospital when the war ended. Afterward, he became an electrician in West Germany. He died in 1996. As the Soviet counter-attacks started to push out the Germans out of Russia, the only one who seemed not to be affected by this turn of events was Michael Wittmann. His kill count continued to grow. He received the Knights Cross for neutralizing 88 tanks and tank destroyers. In addition to this, a number of anti-tank and anti-infantry guns was destroyed by Wittmann. He controlled the battleground, feeling more secure and self-confident after each victory. Wittmann earned the nickname The Black Baron, as a reference to Manfred von Richthofen, who was known as the Red Baron. This nickname didn’t only reflect his success on the battlefield, but also the chivalry that he practiced. There is an anecdote stating that Wittmann knocked out a Soviet T-34 on one occasion and the enemy crew was on fire as they bailed out of the flaming hull of the tank. Wittmann stopped his tank and ordered his men to assist the enemy crew covering them with blankets to extinguish the fire. After it was all over, the two sides parted, both preserving their military honor. Perhaps the most famous victory accomplished by Michael Wittmann is the one at the Villers-Bocage. He was stationed in France in 1944, as part of the defense force against the Allied invasion. At the time, Wittmann was trusted to guard the town of Villers-Bocage together with five other Tiger tanks apart from his own. They were stationed near the town at the point codenamed Hill 213. The lead elements of the British 7th Armored Division (the famous Desert Rats) were on the move with one of their objectives being the taking Villers-Bocage. Wittmann didn’t expect the Allies to arrive so soon. Even though they were undetected at the time the British tanks were approaching the town, it was clear that they would soon be spotted and overrun. The British took Villers-Bocage without a fight, but the following morning all hell broke loose. While the main bulk of the Allied column continued towards Hill 213, Wittmann organized a surprise attack. Alone, he proceeded to attack the rear of the column while the other four Tigers battled the British front. Wittmann caused mass panic by knocking out 8 Allied tanks and a number of half-tracks and anti-tank guns. He then charged the town of Villers-Bocage. The element of surprise fueled his blitzkrieg even more, as the Allies failed to respond quickly while Wittmann neutralized their tanks, suffering minimal damage. Accounts differ as to what happened next. Historians record that, following the destruction of the OP tanks, Wittmann dueled briefly without success with a Sherman Firefly before withdrawing. The Tiger is then reported to have continued eastwards to the outskirts of the town before being disabled by an anti-tank gun. However, Wittmann’s own account contradicts this; he stated that his tank was disabled by an anti-tank gun in the town center. In less than fifteen minutes, thirteen or fourteen tanks, two anti-tank guns, and thirteen to fifteen transport vehicles had been destroyed by the Heavy SS-Panzer Battalion 101, the vast majority attributed to Wittmann.[1]

On 8 August 1944, Anglo-Canadian forces launched Operation Totalize. Under the cover of darkness, British and Canadian tanks and troops seized the tactically important high ground near the town of Saint-Aignan-de-Cramesnil. Here they paused, awaiting an aerial bombardment that would signal the next phase of the attack. Unaware of the reason the Allied forces had halted, SS Hitlerjugend Division Commander Kurt Meyer ordered a counterattack to recapture the high ground. Wittmann led a group of seven Tiger tanks from Heavy SS-Panzer Battalion 101, supported by additional tanks and infantry.

His group of Tigers crossed open terrain towards the high ground. They were ambushed by Allied tanks from two sides. On the right or northeast, British tanks from "A" Squadron 1st Northamptonshire Yeomanry and "B" Squadron 144th Regiment Royal Armoured Corps were positioned in woods. To the left or west, "A" Squadron Sherbrooke Fusilier Regiment was located at a chateau courtyard broadside to the attack, where they had knocked firing positions through the stone walls.

The attack collapsed as the Canadian tanks destroyed two Tiger tanks, two Panzer IVs and two self-propelled guns (German: Sturmgeschütze) in Wittman's force, while British tank fire destroyed three other Tigers. During the ambush, anti-tank shells—fired from either the British or Canadian tanks—penetrated the upper hull of Wittmann's tank (number 007) just outside of Saint-Aignan-de-Cramesnil, igniting the ammunition. The resulting fire engulfed the tank and blew off the turret. The destroyed tank's dead crew members were buried in an unmarked grave. In 1983, the German war graves commission located the burial site. Wittmann and his crew were reinterred together at the La Cambe German war cemetery in France.