From Metapedia
(Redirected from Karl Donitz)
Jump to: navigation, search

Karl Dönitz (originally Carl; b. 16 September 1891 in Grünau by Berlin; d. 24 December 1980 in Aumühle by Hamburg) was a German officer of the Kaiserliche Marine, the Reichsmarine and the Kriegsmarine, finally Großadmiral (Grand Admiral) in WW II as well as Reichspräsident of Germany. 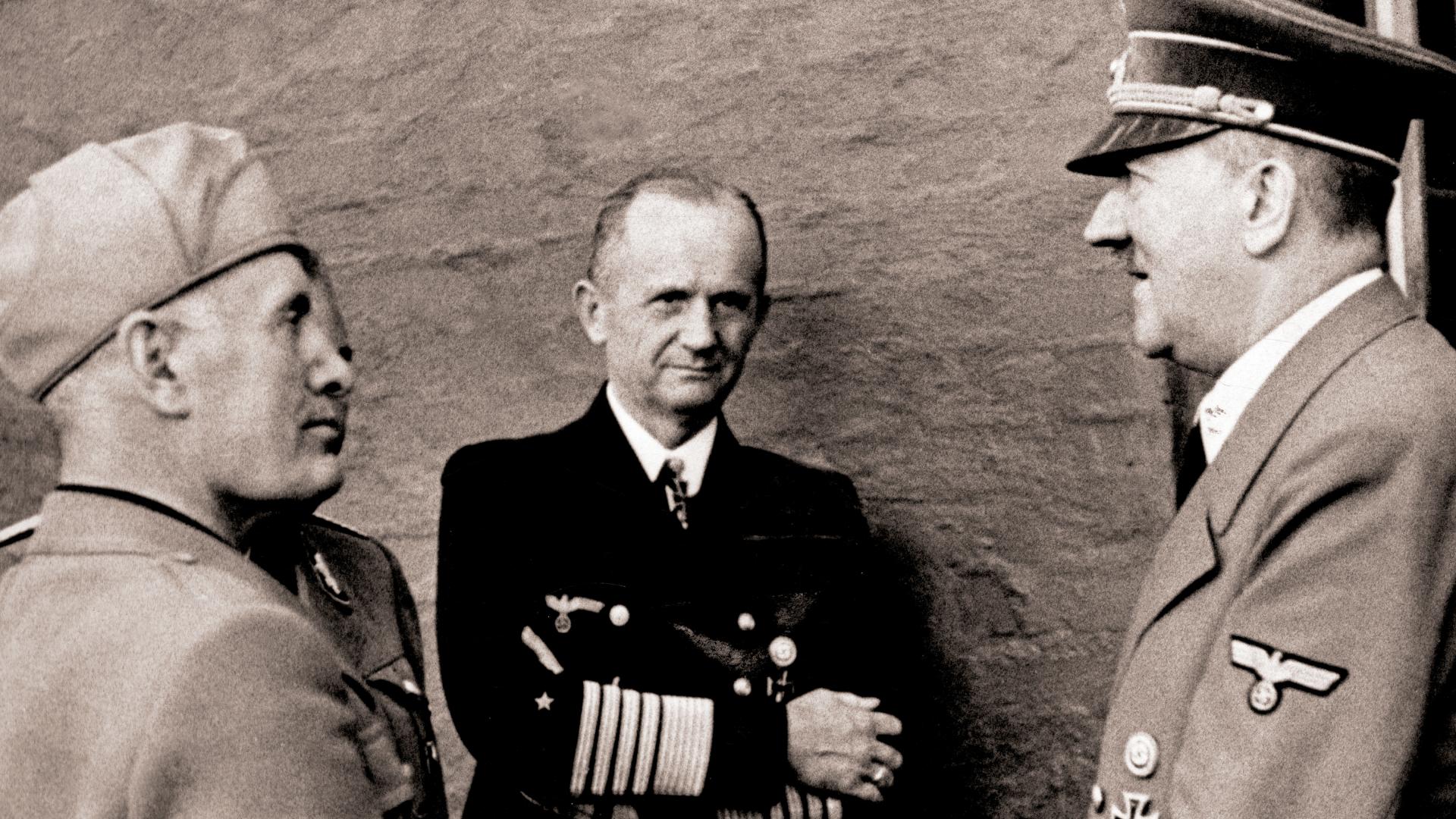 From left to right: Mussolini, Dönitz and Hitler 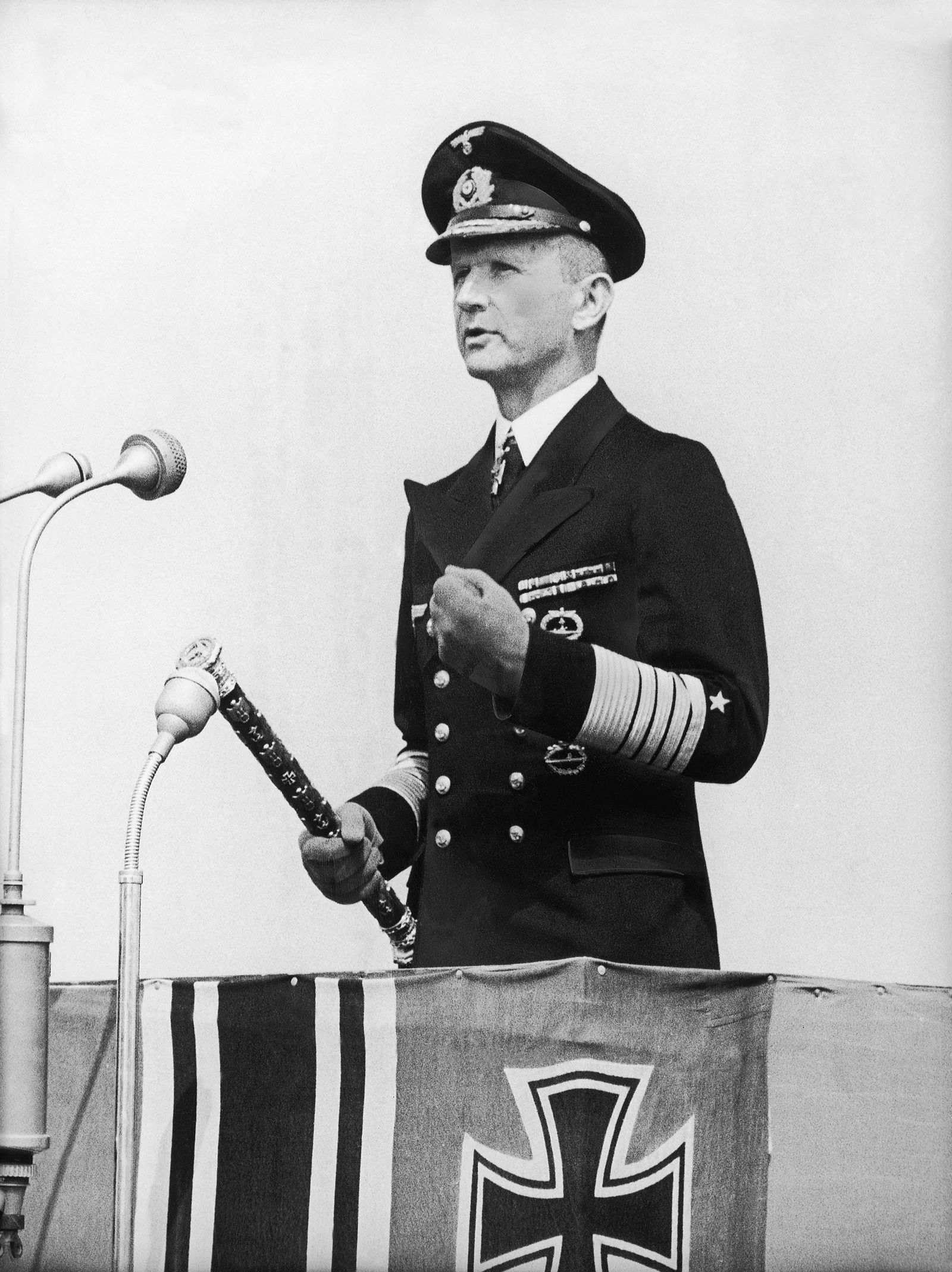 At age 19 Dönitz enlisted in the German Navy and by 1913 was a commissioned officer. In World War I Dönitz severed on a battleship in the Mediterranean until he was transferred to Unterseeboote in 1916. He was captured in 1918 and held as a POW until July 1919.

Throughout the 1920's and into the 1930's Dönitz remained in the Navy, until 1935 when he was assigned the position of designing new U-Boats. During the design period, Dönitz had many dis-agreements with Hermann Goering about the funding. Dönitz remarked:

"We need 1,000 submarines to win any future war with Britain"

But by 1939 he had only 57. At the early stages of the war, the German Navy was only equipped with 750-ton Type VII U-boat, which was insuffient for Atlantic crossings and operations, so he developed and introduced the idea of fighting in "Wolf Packs". Between 1941 and 1943 the Wolf Packs were sinking a vast amount of Allied goods and supplies. January 1943 saw Hitler sacking Erich Raeder as Chief of the German navy and replaced him with Dönitz. By May of 1943, the Allies had developed more sophisticated means to help curb the Wolf Packs domination in the Atlantic, by means of long distance aircraft patrols, better sonar systems and improved depth charges.

In 1944 Dönitz had gave permission for a new electric U-Boat to be developed and by working closely with Albert Speer they had managed to produce 45 of these new boats a month by 1945. However this what not enough to aid them or make an impact by wars end. With the death of Hitler on 30 April 30 1945 Dönitz was to become head of State and surrendered Germany to Allied forces.

At the Nuremberg Trials, Dönitz was charged and convicted of war crimes and received a 10 year prison sentence. After his release in late 1956 he wrote his first book, a autobiography entitled "Memoirs: Ten Years and Twenty Days". His second book followed in 1968,entitled "My Ever-Changing Life" it was mainly directed at the years before 1935 and is a rare book.

Dönitz died of a heart attack on 24 December 1980. He was the last German officer of the ranking Grand Admiral and the last president of the Reich.

Karl was the son of Karl Emil Dönitz (ᛉ 21 October 1857 in Zerbst), an engineer, and his wife Wilhelmine Emilia Anna, née Beyer (ᛉ 22 October 1862 in Crossen an der Oder). Karl had an older brother.