Imperium: The Philosophy of History and Politics 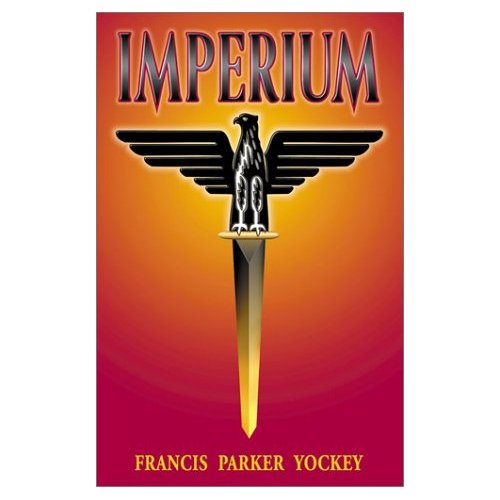 Imperium: The Philosophy of History and Politics is a book by the ideologue Francis Parker Yockey (using the pen name Ulick Varange). Written in Brittas Bay, Ireland, in 1947, Imperium is described by its author as a Spenglerian critique of materialism and rationalism (and an advocacy of a pan-European fascist united Europe). Yockey declared that he was deeply indebted to Spengler's works including his 1920 Cultural analysis, Der Untergang des Abendlandes (Decline of the West).

Imperium was first published in Great Britain in 1948 and issued in two volumes with a run of one thousand copies for the first volume and two hundred for the second. Two different printers were used. Westropa Press for the first volume and Brooks and Jones & Dale, London, for the second volume. This discrepancy in the number of copies and the change of printers shows the difficulty in financing the publication of Yockey‘s first work.

In 1962 Imperium was first published in America by Charles L. Smith under the imprint Truth Seeker.[1] At the time, Smith was publisher of The Truth Seeker, an atheist racial-nationalist publication. In 1969 a softcover edition was published by Noontide Press. The Introduction attributed to Willis Carto in the Noontide edition was actually penned by Dr. Revilo P. Oliver.

A Spanish edition of Imperium was issued in 1977 by the publishing house Ediciones Wotan. This firm was closely associated with the Spanish National Socialist group CEDADE.[2]

Quotes from the Book

Yockey told his wife and sister he coded his work so there would be no doubt as to its authorship. On pages 480-1 at the start of each successive paragraph the first letters spell FYOCKEY. The same code is repeated on pages 498-9. In 1971 Terrence D. Oaks, of Los Angeles with the help an amateur cryptographer discovered the code appearing in two places of the text.[3]