From Metapedia
(Redirected from Faurisson affair)
Jump to: navigation, search 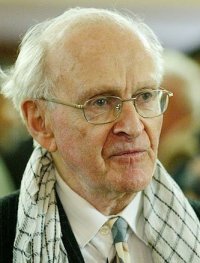 Robert Faurisson (5 January 1929 – 21 October 2018) was a French professor of literature and a Holocaust revisionist.

His father was French and his mother was Scottish. As a boy and young man, he attended schools in Singapore, Japan, and in France. He was educated at a Lycée in Paris, and at the renowned Sorbonne. He received his "State Doctorate" in letters and the humanities from the Sorbonne in 1972, where he also taught from 1969 to 1974. From 1974 until 1990, Faurisson was a professor of French literature at the University of Lyon II. He is a recognized specialist of text and document analysis, and is the author of four books on French literature.[1]

After years of private research and study, Dr. Faurisson first made public his skeptical views about the Holocaust extermination story in two items published in December 1978 and January 1979 in the influential Paris daily Le Monde.[1]

Since 1978, Dr. Faurisson has presented his critical view of the Holocaust extermination story in numerous articles, in many interviews, and in several books.[1]

In the archives of the Auschwitz State Museum in Poland, Faurisson discovered the technical and architectural drawings of the Auschwitz morgues, the crematories and other installations. He is the first person to publicize these important documents, and to point out their significance.[1]

Faurisson played an important role in both 1985 and 1988 in Ernst Zündel's Holocaust trials. His role in those legal battles went far beyond his testimony on the stand as a witness. Especially during the 1985 trial, he spent hundreds of hours -- often working all day and very late into the night -- preparing questions used by defense attorney Doug Christie in his devastating interrogations of Raul Hilberg, Rudolf Vrba and other prosecution witnesses. An important contribution to the defense in the 1988 trial was his key role in securing the participation of Fred Leuchter, an American gas chamber specialist. Faurisson played an important role in arranging for Leuchter's on-site investigation in Poland of supposed extermination gas chambers, and in making public the American’s remarkable findings.[1]

In December 2006 Faurisson took part, with notable others including Dr.Fredrick Töben, in the International Conference to Review the Global Vision of the Holocaust in Tehran sponsored by the Iranian Government. Iranian Foreign Minister Manouchehr Mottaki said the conference sought "neither to deny nor prove the Holocaust... [but] to provide an appropriate scientific atmosphere for scholars to offer their opinions in freedom about a historical issue".

Noam Chomsky has expressed support for Faurisson's right to freedom of expression regarding the Holocaust, which greatly damaged Chomsky's reputation in France among those objecting to this.

In 1990, with Faurisson in mind, the French National Assembly passed the Faurisson law, otherwise known as the Fabius-Gayssot Act, criminalizing the expression of public doubts about the execution-gas-chamber claims.[2]

One consequence was removal from his position at Lyon University.[2]

Faurisson has been obliged to defend himself many times in French courts for his Holocaust revisionism. He had to contend with numerous court convictions.[1]

His bank account has been frozen, and court officials have repeatedly visited his home threatening him and his wife with seizure of their furniture to pay for financial "damages" imposed for his “heretical” remarks. Because of this campaign, his family life has been repeatedly disrupted and thrown into turmoil. His health suffered terribly.[1]

For his views Faurisson has repeatedly been a victim of physical assault. Between November 1978 and May 1993 he was a victim of ten attacks, at least nine of them carried out by Jewish thugs. None of the criminal assailants in any of these assaults has ever been brought to justice. The most savage was a nearly fatal attack on September 16, 1989, for which a group calling itself "The Sons of the Memory of the Jews" claimed responsibility.[1]