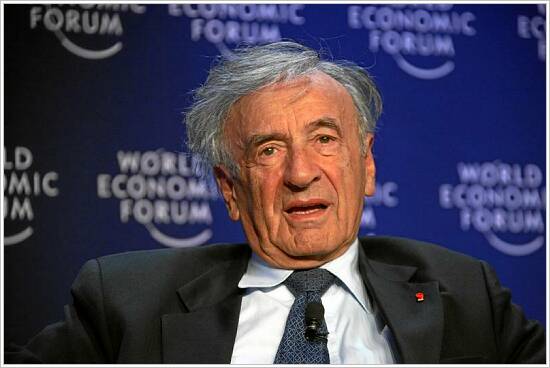 Elie Wiesel during the elite globalist Annual Meeting 2008 of the World Economic Forum in Davos, Switzerland.

Elie Wiesel (born Eliezer Wiesel, 1928 - 2016) is often described as the world's most famous "Holocaust survivor". The Jewish Wiesel was a Zionist, writer, and, naturally, awarded the Nobel Peace Prize and many other awards and honors. Wiesel authored many books, the best known of which is Night, a memoir about his alleged Holocaust experiences.

In the original version of his book (published before the later stricter "standardization" of the Holocaust narrative), Wiesel did not mention the alleged gas chambers killings. Instead, the supposed killings were carried out by the victims being burned alive in open fire pits.[1]

The revisionist Robert Faurisson has written that "Forced to choose from among several Allied war propaganda lies, he chose to defend the fire lie instead of the boiling water, gassing, or electrocution lies. In 1956, when he published his testimony in Yiddish, the fire lie was still alive in certain circles. This lie is the origin of the term Holocaust. Today there is no longer a single historian who believes that Jews were burned alive. The myths of the boiling water and of electrocution have also disappeared. Only the gas remains."[2]

When the Communist Red Army was approaching Auschwitz and the camp was evacuated, Wiesel and his father were offered to stay in the camp or to join the SS in the evacuation. Wiesel took the decision to join the SS, rather than to be liberated by the Communists.[1] See also Primo Levi and Israel Gutman, who have made similar statements. See also Holocaust Memorial Days on Communist atrocities at the liberation of Auschwitz.

Holocaust revisionists have stated extensive criticisms of Wiesel's claims and have even doubted that he was a prisoner at Auschwitz and other Holocaust camps. See the "External links" section.

"The Norwegian Nobel Committee has resolved that the Nobel Peace Prize for 1986 should be awarded to the author, Elie Wiesel. It is the Committee's opinion that Elie Wiesel has emerged as one of the most important spiritual leaders and guides in an age when violence, repression and racism continue to characterise the world. Wiesel is a messenger to mankind; his message is one of peace, atonement and human dignity. His belief that the forces fighting evil in the world can be victorious is a hard-won belief. His message is based on his own personal experience of total humiliation and of the utter contempt for humanity shown in Hitler's death camps. The message is in the form of a testimony, repeated and deepened through the works of a great author. Wiesel's commitment, which originated in the sufferings of the Jewish people, has been widened to embrace all repressed peoples and races. The Norwegian Nobel Committee believes that Elie Wiesel, with his message and through his practical work in the cause of peace, is a convincing spokesman for the view of mankind and for the unlimited humanitarianism which are at all times necessary for a lasting and just peace."
—Press Release - Nobel Peace Prize 1986.[3]

"Every Jew, somewhere in his being, should set aside a zone of hate — healthy, virile hate — for what persists in the German."
—Elie Wiesel.[1]

"‘What are you writing?’ the Rebbe asked. ‘ – Stories,’ I said. He wanted to know what kind of stories: true stories. ‘About people you have known?’ Yes, about people I might have known. ‘About things that happened?’ Yes, about things that happened or could have happened. ‘But they did not?’ No, not all of them did. In fact, some were invented from almost the beginning to almost the end. The Rebbe leaned forward as if to measure me up and said with more sorrow than anger: ‘That means that you are writing lies!’ I did not answer immediately. The scolded child within me had nothing to say in his defense. Yet, I had to justify myself. ‘Things are not that simple, Rebbe. Some events do take place but are not true; others are – although they never occurred.’"
—Elie Wiesel.[1]

Part of this article consists of modified text from Wikipedia, and the article is therefore licensed under GFDL.
Retrieved from "http://en.metapedia.org/m/index.php?title=Elie_Wiesel&oldid=453980"
Categories: