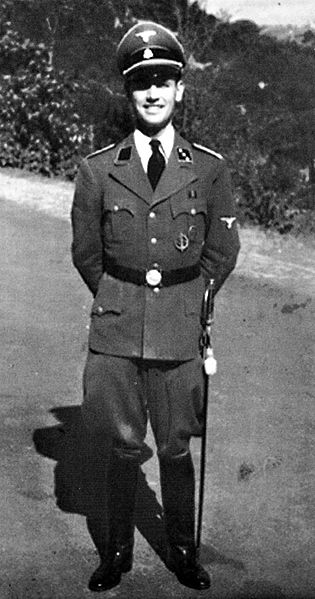 Erich Priebke (1913 – 2013) was a German SS officer. During the war he was stationed in Italy. After the war, he escaped from a prison camp to Argentina. In 1998, after extradition to Italy and several trials, he was sentenced to life imprisonment for participating in the Ardeatine massacre in Rome on 24 March 1944.

This was a retaliation for a partisan attack on 23 March 1944. A description by Germar Rudolf:

"In early 1944 the Allies landed in Italy, a few miles south of Rome. In order to keep the immense cultural treasures of Rome safe from harm, the German Field Marshal Kesselring declared Rome an "open city", i.e., a battle-free zone. This made Rome the hotbed of all kinds of partisan groups and foreign secret service activities. Since Italy was at that time engaged in a sort of civil war (not all Italians agreed with the ousting of Mussolini and the betrayal of Germany), the situation in Rome, only a few miles behind the battle front, was explosive. These were the conditions under which Obersturmbannführer [Lieutenant Colonel] Herbert Kappler of the Security Police was charged with keeping peace and order in the city, a task at which he was indeed largely successful.

On March 23, 1944, however, something happened. On this day, as on many other days before, the police regiment "Bozen", which was comprised almost entirely of South Tyroleans, marched through the Via Rasella. As the regiment passed by a street-sweeper's cart, an enormous explosive charge in the cart, mixed with iron shrapnel, blew up. 32 of the German policemen were killed instantly, another 10 died later of their injuries. 60 policemen were badly wounded.

To prevent an escalation of the partisan warfare in Rome, the Wehrmacht Supreme Command reacted to this assassination (which had violated international law) by posting placards announcing that if the perpetrators did not turn themselves in, 10 civilians would be shot for every policeman that had been killed. Kappler even released captured partisans with the order to inform the assassins in the underground of this announcement and to persuade them to surrender. When no one had given themselves up by March 24, 335 persons were executed in the Ardeatine Caves near Rome; Kappler had assembled this group mostly of prisoners, and of criminals, saboteurs, spies and partisans who had already previously been sentenced to death. After the war, Kappler was sentenced to lifetime imprisonment for this act, but his subordinates were acquitted.[1]

Priebke used the superior orders defense. Regarding general aspects, see the article on this.

Other less politically correct views include that certain forms of reprisals were not illegal at this time. See National Socialist Germany and partisans/resistance movements: Partisans and reprisals and the "External links" section.