From Metapedia
(Redirected from Cossacks)
Jump to: navigation, search 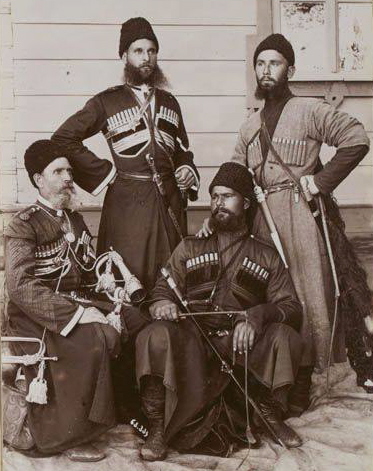 As the Russian state of Muscovy developed in the thirteenth and fourteenth centuries, men seeking freedom, adventure, and booty, settled on the southern frontiers in the steppes of Russia; they became, much like the American pioneers of the West, an advance guard in the expansion of their country. Fiercely independent, they formed military statelets with elected chiefs (Atamans). They fought centuries of their own wars against the Poles, the Tartars, and the Turks, and acknowledged only in the loosest manner the authority of the Russian Tsars. They developed a military caste that accepted war as a way of living.

Gradually, however, in the midst of rebellions, wars, and changes of alliances, the Cossacks became part of the Russian Empire, while still maintaining a form of autonomy and self-government, with democratic principles and a kind of military socialist system wherein land was evenly apportioned to all male members of the Cossack communities. There were eleven Cossack hosts, as they were called, stretching from either side of the river Don (Don Cossacks) to the east of the Volga (Volga Cossacks), thence down to the Caucasus, across the Ural Mountains, east to the steppes of Orenburg, the forests of Siberia, and the tundras of Trans-Baikal. Each host had its traditions, its uniform, and its organisation, civil and military. The Kuban and Terek Cossacks wore a uniform modelled on the dress of the Caucasian mountaineers. Other Cossack hosts wore uniforms resembling that of the Russian soldier, except for the wide breeches with a broad coloured stripe down the side, the colour identifying the host.

During the later stages of the Russian Revolution and subsequent Civil War, Trotsky stated "the land-owning Cossacks held out the longest of all, dreading an agrarian revolution in which the majority of them would lose."[1]