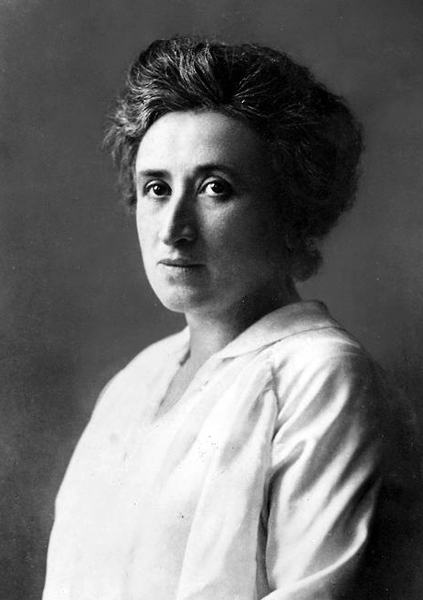 Rosa Luxemburg (b. 5 March 1871 in Zamość, Poland; d. 15 January 1919 in Berlin, Germany) was a Polish Jewish communist revolutionary, propagandist and ideologue. In the initial phase of her activities, she was associated with, and became the most famous member of, the The Social Democratic Party of the Kingdom of Poland and Lithuania (Polish: Socjaldemokracja Królestwa Polskiego i Litwy, SDKPiL), a Marxist political party founded in 1893 which later merged into the Communist Workers Party of Poland along with the Warsaw Jewish Bund (or League)[1] before she moved to Germany to operate against the German people initially within the Social Democratic Party of Germany.

In 1902 she met with the notorious Polish communist, Felix Dzerzhinski while he was in Berlin.[2] With him, who suggested the title, she founded The Red Standard journal, initially published in Krakow, Poland. After the Marxist Social Democratic Party of Germany (SPD) took the decision to support Germany during World War I, she co-founded, with Karl Liebknecht, the subversive Spartacist League (German: Spartakusbund) which later became the Communist Party of Germany. The Spartacist League plotted to usurp the State and enslave the German people under a Communist dictatorship. In addition to undermining the war effort, they were finally involved in a violent revolution against the fledgling German SPD government in January 1919.

In response to the uprising, German Chancellor and SPD leader Friedrich Ebert ordered the Freikorps to destroy the communist revolution, which by January 11th was crushed. Luxemburg's Red Flag newspaper falsely claimed that the rebellion was spreading across Germany. The uprising was small-scale, had limited support and consisted of the occupation of a few newspaper buildings and the construction of street barricades. Luxemburg and Liebknecht were captured in Berlin on January 15th by the Rifle Division of the Cavalry Guards of the Freikorps (Garde-Kavallerie-Schützendivision).[3] Its commander, Captain Waldemar Pabst, with Lieutenant Horst von Pflugk-Harttung, questioned them under torture and then gave the order to summarily execute them. Luxemburg was knocked down with a rifle butt by the soldier Otto Runge, then shot in the head, either by Lieutenant Kurt Vogel or by Lieutenant Hermann Souchon. Her body was then flung into Berlin's Landwehr Canal.[4] Liebknecht was shot in Berlin's Tiergarten and his body, without a name, deposited in a city morgue. Hundreds of communist revolutionaries were also captured, then executed.