From Metapedia
(Redirected from Patrick Buchanan)
Jump to: navigation, search 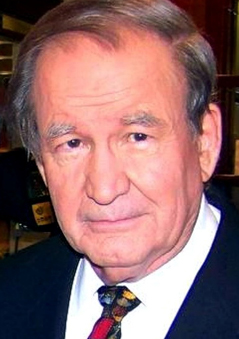 Patrick Joseph Buchanan (born 2 November 1938) is an American paleoconservative political commentator, columnist, politician and broadcaster. Buchanan was an assistant and special consultant to U.S. Presidents Richard Nixon, Gerald Ford, and Ronald Reagan. He sought the Republican presidential nomination in 1992 and 1996. He ran on the Reform Party ticket in the 2000 presidential election. He co-founded The American Conservative magazine and launched a foundation named The American Cause.

He had various roles in mainstream media, such as political debate programs, until allegations of less politically correct statements, such as regarding the Holocaust, Jewish influence, mass immigration, and the Israel Lobby.

In the book Churchill, Hitler and the Unnecessary War, he argues that it was Britain's guarantee to Poland that caused the Second World War. A world war that later led to Poland and the whole of Eastern Europe being occupied by the Soviet Union.