From Metapedia
(Redirected from Ottoman Dynasty)
Jump to: navigation, search 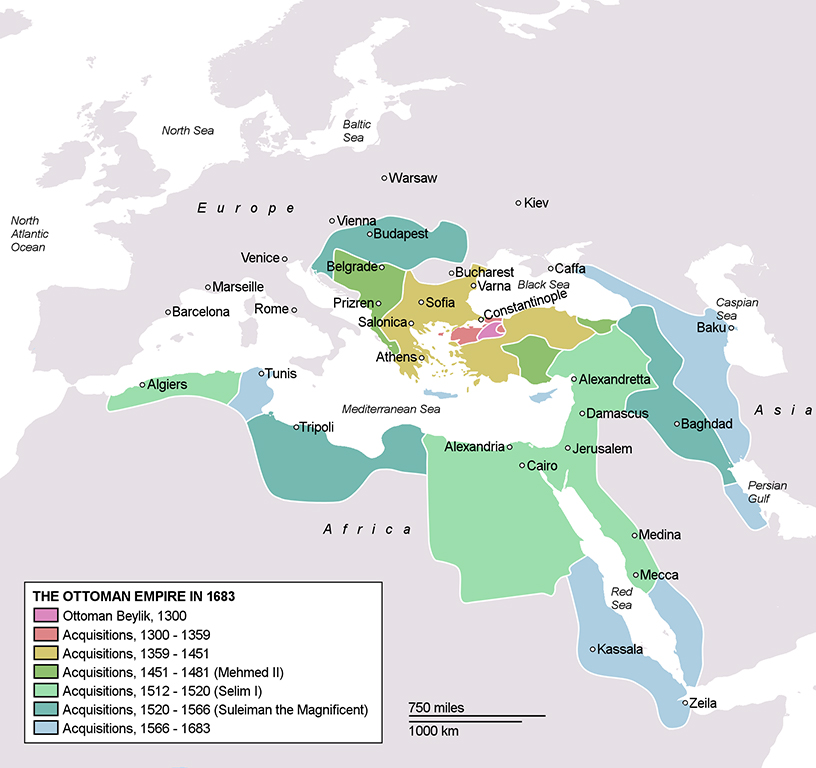 The Ottoman Empire was created by Turkish tribes who invaded Asia Minor and surrounding territories, and grew to be one of the most powerful states in the world during the 15th to the 19th centuries. The Ottoman Empire was ruled over by Sultans and Caliphs, spanned more than 600 years, and came to an end in 1922 by a revolution led by a European-orientated group of nationalists renaming Ottoman Asia Minor and their toehold on the European mainland around Constantinople, Turkey. Its imperial possessions were seized by the Liberal plutocratic Western Allies and turned into successor states and colonies. Slavery was a legal and a significant part of the Ottoman Empire's economy and society. As late as 1908, female slaves were still sold in the Ottoman Empire. Hundreds of thousands of Europeans were captured by Barbary pirates and sold as slaves in North Africa and the Ottoman Empire between the 16th and 19th centuries.

The Ottoman Empire (1299 to 1922) (Old Ottoman Turkish: دولت عالیه عثمانیه Devlet-i Âliye-yi Osmâniyye, Late Ottoman and Modern Turkish: Osmanlı Devleti or Osmanlı İmparatorluğu, also known as the Turkish Empire or Turkey by its contemporaries, was a multi-ethnic and multi-religious Turkish-ruled state which, at the height of its power (16th – 17th centuries), spanned three continents, controlling much of Southeastern Europe, the Middle East and North Africa, stretching from the Strait of Gibraltar (and, in 1553, the Atlantic coast of Morocco beyond Gibraltar) in the west to the Caspian Sea and Persian Gulf in the east, from the edge of Austria, Slovakia and parts of Ukraine in the north to Sudan, Eritrea, Somalia and Yemen in the south. 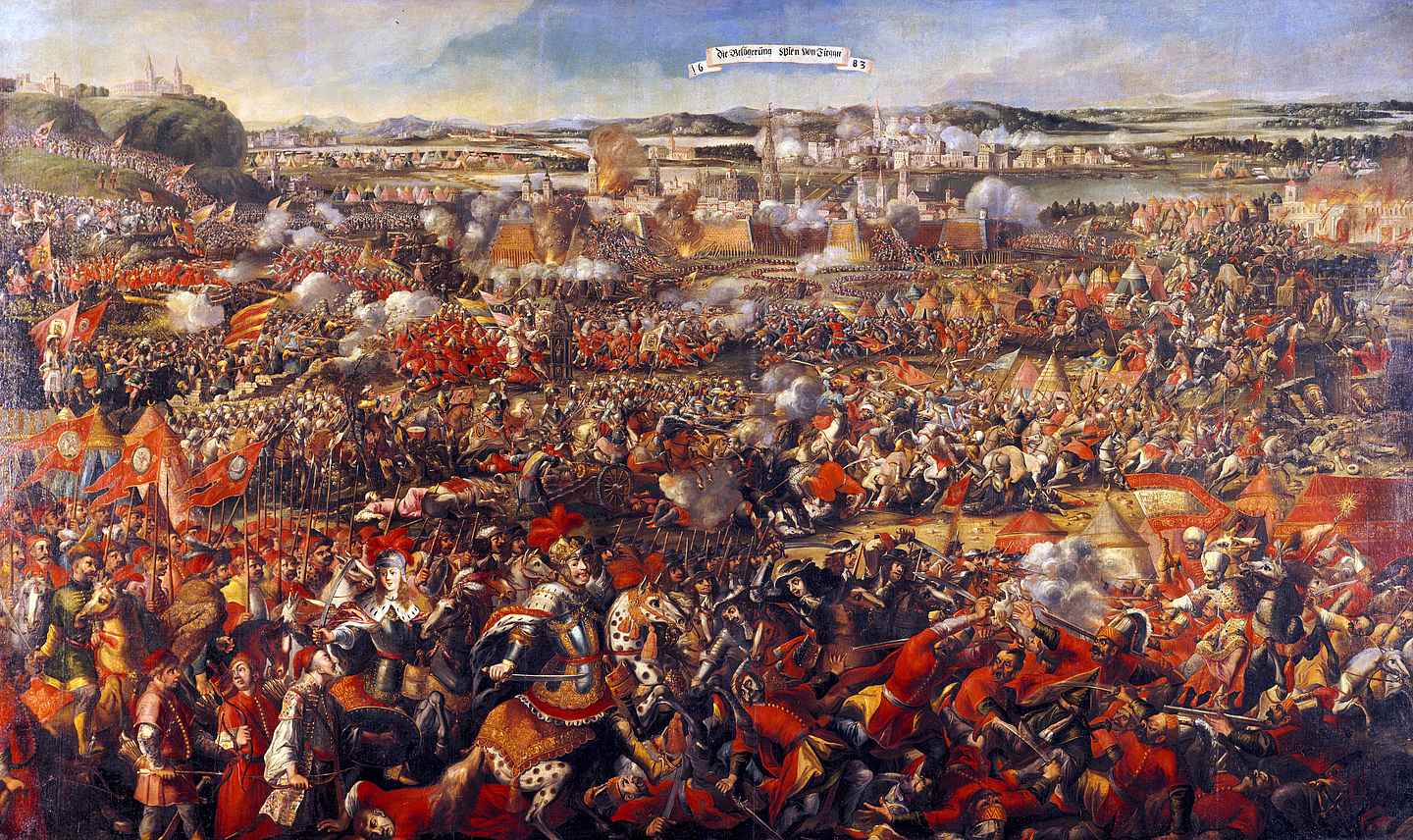 Battle of Vienna, 12 September 1683; Reichsheer and Kaiserliche Armee of the Holy Roman Empire of the German Nation together with it's Polish–Lithuanian allies defeat the Ottoman Army. The Ottomans fought on for another 16 years, losing control of Hungary and Transylvania in the process before finally desisting. The Roman-German Emperor signed the Treaty of Karlowitz with the Ottoman Empire in 1699. The battle marked the historic end of Ottoman imperial expansion into Europe. Never again should their Muslim hordes, the Türkengefahr, get a foothold in once occupied territory. 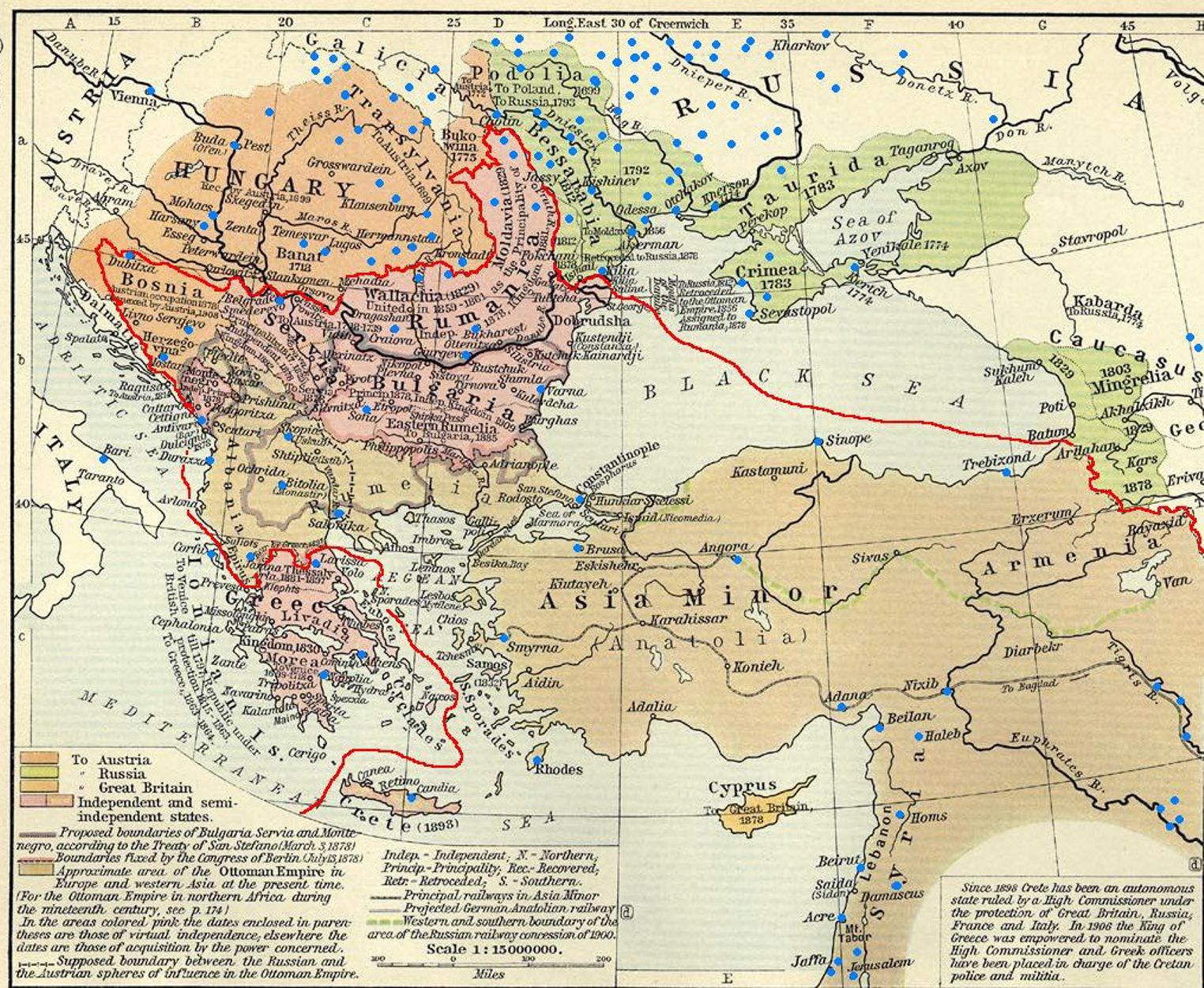 Map of southeastern Europe and the Levant, showing the extent of the Ottoman Empire in1840 (red outline). Major Jewish communities are denoted in blue.

The empire was at the centre of interactions between the Eastern and Western worlds for six centuries. At the height of its power, the Ottoman Empire contained 29 provinces, in addition to the tributary principalities of Moldavia, Transylvania, and Wallachia. With Constantinople (today known as Istanbul) as its capital, the Ottoman Empire was in many respects an Islamic successor to earlier Mediterranean empires — namely the Roman and Byzantine empires. As such, the Ottomans regarded themselves as the heirs to both Roman and Islamic traditions, and hence rulers of a "Universal Empire" through this "unification of cultures".

From the beginning of the Muslim expansion, even before the ascent of the Turks, the Jews in the East were known for siding with the Caliphate in attempts to destroy the Byzantine Empire. This streched back as far as the 7th century Battle of Yarmouk, in which the Christian Levant was stolen by the forces of the Rashidun Caliphate. This anti-Christian preference largely continued during the Crusades for national liberation; accounting for the later negative stereotype of the events by Judeophile liberals during the "Enlightenment".

With the rise of the Mamluks and the Ottoman Empire, more Jews living in Christendom began to move East to the Ottoman Empire. Especially after the Alhambra Decree of 1492, when the Jews were decolonised from Spain. This was encouraged especially by the Sultan, Bayezid II. The Turks especially settled them in occupied Greek areas such as Constantinople and Salonika, as well as other cities throughout the Empire. The Jews came to dominate finance, banking and business, which saw them in competition with other groups of the Empire.

The most powerful of the Sephardic Jewish dynasties were the Mendes family. One relative of this family Joseph Nasi, was made Duke of Naxos and the Seven Islands and was powerful under both Suleiman I and Selim II. He was involved in actively encouraging the Ottoman conquest of Cyprus from Venice and was a proto-Zionist, advocating Jewish settlement in Palestine. The revanchist Sephardim were the key money-men during the Ottoman wars in Europe, particularly against the Holy Roman Empire, Republic of Venice and the Knights Hospitaller. This included the successful stealing and occupation of parts of Hungary, as well as Rhodes, Crete and other places.

Jews were an influential minority, although still placed under the various restrictions and discriminations applied to non-Muslims. Some had been expelled from Christian areas during Jewish expulsions, possibly causing resentment.

"Additionally, some Sephardic Jews 'were...prominent merchants with European markets' who were even regarded as 'potential allies, diplomats, and spies' during times of war against Christians."[1]

More recently, in association with the creation of Israel, Jews have been expelled / emigrated from many of the Muslim successor states of the Ottoman Empire, as discussed in the article on Jewish expulsions.

The case of Hungary as an example

As usual for world occupying empires, the Turkish Empire was backed by Jewish background operators. Usually before the Turkish army appeared, Jewish bankiers ruined the finances of the country to be occupied, this way weakening the self-protection of the country to be occupied. Also revolutions were a similar mean. In Hungary, for example a Jew, called Imre Fortunatus, emptied the Hungarian treasury with speculations around 1510, and also a peasant revolt was incited 1514, which made the way free for the won battle in 1526. With the Turks a large number of Jews appeared in Hungary, and 1690, when Hungary was freed from the Turks, the Jews fiercely fought on Turkish side to avoid the end of Turkish rule in Hungary. Some of them left Hungary for Western Europe, and they often called themselves "Ofener" from the name of Buda at that time.