Kurt Gerstein (August 11, 1905 – July 25, 1945) was a German SS officer. He allegedly wrote the "Gerstein Report", which is an important document for the politically correct "official" view on the Holocaust. 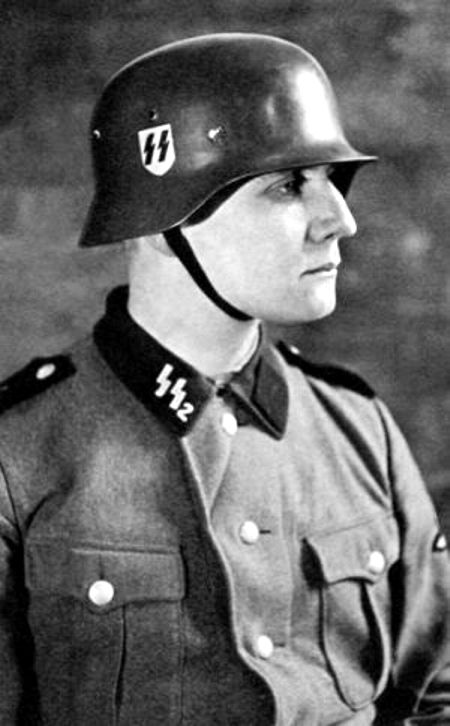 Kurt Gerstein was born in Münster in Westphalia, Germany on 11 August 1905. Sixth of seven children, in a family whose ancestors were typical members of the Prussian middle class who were strongly chauvinistic and "totally compliant to authority".[1] His father, Ludwig, a former Prussian officer, was a judge and an authoritarian figure in what was a conventional, German middle class family of the time. In the family genealogical he proudly proclaimed that there was only Aryan blood in the family and exhorted future generations to "preserve the purity of the race!"[2] As late as 1944 he was to write to his son Kurt: "You are a soldier and an official and you must obey the orders of your superiors. The person who bears the responsibility is the man who gives the orders, not the one who carries them out."[3]

Kurt was no more tolerant of discipline in secondary school than within the family. However, in spite of earning many bad reports, he managed to graduate with Abitur at the age of 20. From 1925 to 1931, he studied mining at the RWTH Aachen University and the Philipps University in Marburg. On July 28, 1929, he was appointed Gerstein VII Corps Loop Bearer (VII Corpsschleifenträger) from Teutonia Marburg. The fact that he considered compulsory drinking to be incompatible with being a Christian led to his temporary exclusion from his corps. He moved to the Technical University of Berlin to become a mining engineer. Since 1931 a mining trainee and since 1935 a mining assessor, he was employed by the Saarbrücken mine management.[4] He had been a member of the NSDAP since March 1933 and a member of the SA since 1934 (other sources state July 1933). On 4 September 1937, Gerstein started studying Medicine at the University of Tübingen. However his medical studies were interrupted by the outbreak of war.

Although his family was not a particularly religious one, Gerstein received Christian religious training in school. While at university, almost as an antidote to what he saw as frivolous activities of his classmates, he began to read the Bible.[5] From 1925 onwards, he became active in Christian student and youth movements, joining the German Association of Christian Students (DCSV) in 1925 and in 1928 becoming an active member of both the Evangelical Youth Movement (CVJM-YMCA) and the Federation of German Bible Circles where he took a leading role until it was dissolved in 1934 after a takeover attempt by the Hitler Youth movement.[6] At first finding a religious home within the Protestant Evangelical Church he gravitated toward the Confessing Church, which formed itself around Pastor Martin Niemöller in 1934 as a form of protest against attempts of the Party to exercise increasing control over German Protestants.[7] His religious faith caused conflict with the government and he spent time in prison and concentration camps in the late 1930's.[8]

In early 1935 he stood up in a theater during a performance of the play Wittekind protesting against its anti-Christian message and was beaten up by party members in the audience.[9] He also came into conflict with the government for distributing anti-National Socialist material. He was arrested for the first time on 4 September 1936, held in protective custody for five weeks, and expelled from the NSDAP on 15 October 1936. The loss of party membership meant that he was unable to find employment as a mining engineer in the State sector and he applied for reinstatement to the party. He was arrested a second time in July 1938, but was released six weeks later because no charges could be found against him. He (and his father) continued to pursue reinstatement in the party.

At the beginning of 1941, so the official version, he volunteered for the

and joined the Waffen-SS on 13 March 1941. In a well-known picture, on the other hand, he is wearing the collar tab of the 2. SS-Standarte „Germania“/SS-Verfügungstruppe, which would mean he joined much earlier than he had claimed.[10] He supposedly received, in his own words, his military training in Hamburg-Langenhorn, Arnhem and Oranienburg. Because of his medical knowledge, he finally came to the Hygiene Institute of the Waffen-SS. There he became head of the health technology department in January 1942 and was responsible for the technical disinfection service.

Kurt Gerstein and the Holocaust

According to the politically correct version(s) of events, as claimed by Gerstein (or one of these versions): Gerstein had already long before the war been in conflict with National Socialism, due to his Christian religious beliefs. He was involved in activities, such as Christian "anti-Nazi" pamphlets. Due to this, he was expelled from the NSDAP, civil service employment, beaten and wounded by "Nazis", and imprisoned for a period by the Gestapo for "activities against the State". When he in addition learned of the Action T4 killings, which included the killing of his sister-in-law, he decided to become an infiltrator, in order to reveal to the world what was occurring. He therefore joined the SS in 1941, despite his previous history advanced quickly, and in 1942 was named head of the Technical Disinfection Service of the Waffen-SS. He was in 1942 informed of the Holocaust and visited several extermination camps. He remained in the SS, where he had the task of supplying Zyklon B to the camps. However, he tried to contact many people during the war in order to inform them of the Holocaust and tried to sabotage the use of Zyklon B on humans. Near the end of the war, he was arrested by the French, who did not believe his statements of having been a secret dissident and treated him as a war criminal. He committed suicide in 1945 while being in custody.

Before this, in custody, he wrote the "Gerstein report" on his alleged Holocaust experiences. This report later received enormous attention and became a fundamental cornerstone for the politically correct view on several of the Holocaust camps (using very selective quoting from the report). The report is one of the few forms of support for the politically correct view on the "Aktion Reinhard" camps. After the war, several witnesses have given supporting testimonies, such as Gerstein allegedly having informed them of the Holocaust during the war.

According the revisionist views of events: The "Gerstain report" is full of grossly obvious contradictions and absurdities, such as 25 million persons gassed. While also non-revisionists have criticized the report as unreliable, they have not completely rejected it, which revisionists argue is because the report was used to establish important aspects of the politically correct Holocaust version, and the report is now of so fundamental importance that completely rejecting it is not possible. While this is sometimes denied, it was cited as evidence at the Nuremberg trials and selected quotes from the report were printed in the official trial records. There are six different versions of the "Gerstein report". Some of these have been argued to be forgeries, that were likely created in order to try to reduce the absurdities. A variety of explanations for Gerstein's allegations have been proposed (in addition to his own stated longstanding anti-National Socialism), such as fabulations made in order to not be convicted as a war criminal for having had an important role in the camp system administration, fabulations made in order cover-up illegal war profiteering by Gerstein during the war years, fabulations made while being tortured (with the death being a killing due to the torture or a cover-up), and/or mental illness.[11][12][13][14]

Another theory: "One of the stories current about Gerstein is that he wrote the statement in Cherche-Midi prison, in France, and committed suicide, after which his body disappeared. It is far more probable that the statement was written in French by a German Jewish interrogator-"interpreter", and that some of the inconsistencies (such as winter occuring in August, or being in a car in one sentence, and a train in the next) resulted from imperfect transcription of the notes of interrogation into affidavit form. In minor war crimes trials and Japanese war crimes trials, unsworn "statements" of this kind are fairly common, on the theory that they possess "probative value" but less "weight" than sworn statements. It is also possible that Gerstein died of injuries sustained during "interrogation"; or perhaps he hanged himself with the typewriter ribbon. This document was later extensively quoted in the Pohl Trial, where it was "proven" that Treblinka had 10 'gas chambers' (1553-PS) and 10 'steam chambers' (3311-PS) in the same camp at the same time."[15]

The Gerstain Report alleged that Odilo Globocnik told Gerstein that diesel exhaust was used as a murder method in gas chambers (which were implied to be the alleged gas chambers in the "Aktion Reinhard" camps and in order to cause carbon monoxide poisoning). Gerstein also allegedly witnessed a gassing at Belzec, where he stated that a diesel engine was used.[16] Gerstein was a mining engineer and as diesel engines are extensively used in mines, due to their very low short-term toxicity, it is unlikely that Gerstein would have mistaken the engine type. Even is he did not see the engine himself, he would likely have identified it by the distinctive sound diesel engines make.

Post-war statements by others

The post-war statements by others supporting aspects of Gerstein's narrative(s), such as on allegedly being contacted by Gerstein and given Holocaust information, are argued to add further absurdities and contradictions to the narrative(s). "Indeed, the available sources show that Gerstein told a different version of the presumed events to every single person he spoke to." These testimonies have been argued to have been influenced by ideological opposition to National Socialism and/or external pressure to support Gerstein's narrative(s).[11][12][13]