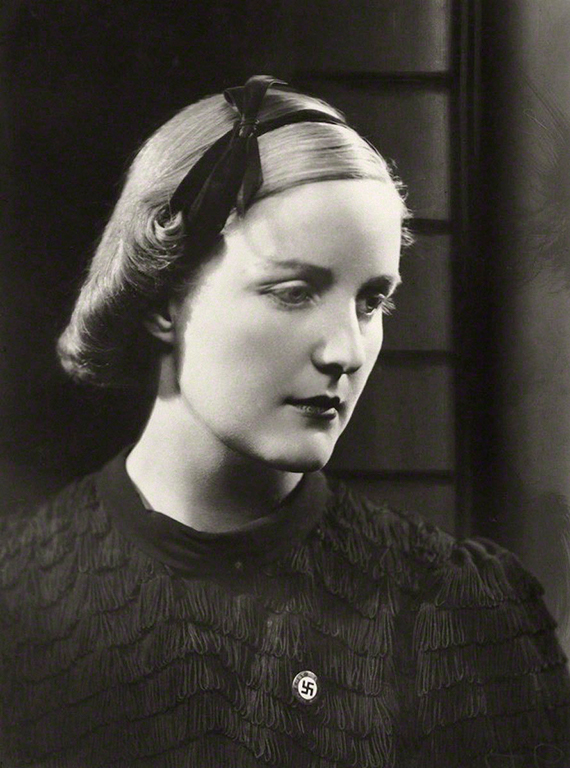 Unity Valkyrie Freeman-Mitford (8 August 1914 – 28 May 1948) was a British socialite, known for her relationship with Adolf Hitler. Both in Great Britain and Germany, she was a prominent supporter of fascism and national socialism. Her sister Diana was married to Sir Oswald Mosley, leader of the British Union of Fascists. 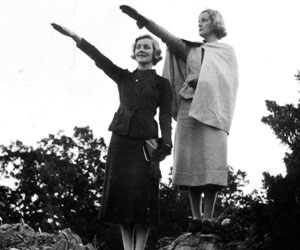 Diana and Unity in the 1930s (with Roman salute)

Unity Mitford was the fifth of seven children born in London, England to David Freeman-Mitford, 2nd Baron Redesdale, and his wife, Sydney (1880–1963). She was named after the actress Unity Moore and Richard Wagner's Valkyrie. Unity was mostly taught by governesses, but she attended a period at Queen´s Gate School in Kensington where she was expelled, she continued in 1930 at St Margaret's School in Bushey.

Growing up, Unity shared room with her sister Jessica, who was already a supporter of Communism. The two sisters quarreled politically and drew a chalk line down the middle to divide the room. 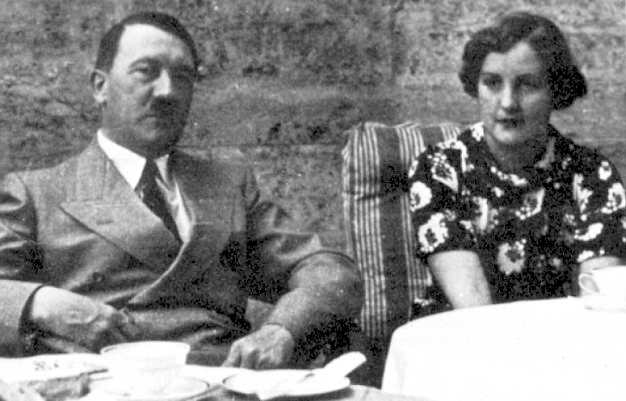 Unity returned to Germany in the summer of 1934, enrolling in a language school in Munich and lived there for long periods. She started sitting in the Osteria Bavaria almost every day, the restaurant where Hitler used to have lunch when he was in the city. After ten months, Hitler finally invited her to his table, where they talked for over 30 minutes, with Hitler picking up her bill. For the young Unity, it is a magical moment.

The two became friends and it was Unity who introduced Diana to Hitler. In the years that followed, her older sister Diana made several trips to Germany, where she met Hitler.

Unity was inducted into Hitler's inner circle and remained with him for five years.

At the end of March 1939, they have lunch at Ost two days in a row. Unity writes: “I had lunch with the Führer on Sunday and Monday, and he asked me to send you viele Grüsse [many greetings]. Both days he was in his very sweetest mood, particularly on Monday, he held my hand most of the time and looked sweet and said ‘Kind’ [child] in his sympathetic way because he was so sorry about England and Germany being such enemies. However he said nothing but wonderful things about England and he completely gave me faith again that it will all come right in the end.”[1]

On September 3, 1939, England and France declare war on Germany. In the afternoon of the same day Unity entered the English Garden in Munich and shot herself in the head. She survived the suicide attempt, and was hospitalised in Munich, where Hitler visited her. In December 1939, Unity was moved to a hospital in Bern in the neutral country of Switzerland, where her mother and youngest sister, Deborah, went to collect her.

Stating she could remember nothing of the incident, Unity returned to England with her mother and sister in January 1940 amid a flurry of press interest. Unity never reached her previous mental level and she suffered severe headaches. During the war, she was cared for by her mother Sydney and sister Deborah. After the war, she moved with her father David to Inch Kenneth.

She died in 1948 at a hospital in Oban of a meningitis resulting from the gunshot wound, and was buried at the small church in Swinbrook, Oxfordshire, alongside three of her other sisters. The inscription on her gravestone reads: "Say not the struggle naught availeth."