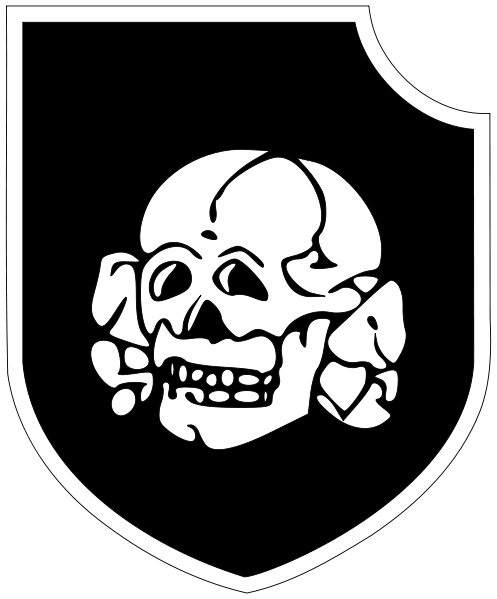 Totenkopf is German for "death's head" or "skull" and typically refers to a skull-and-crossbones image.

Totenkopf (lit. "skull") is the German word for the skull and crossbones and death's head symbols. The "Totenkopf"-symbol is an old international symbol for death, danger or the dead, as well as piracy. It consists usually of the human skull with or without the mandible and often includes two crossed long-bones (femurs), most often depicted with the crossbones being behind some part of the skull. The grammatical translation of Totenkopf would be dead head, not death's head, which would be Todeskopf, but no such word is in use; on the other hand the word used to refer to the skull anatomically or medically is Schädel. Totenkopf applies to symbolic depictions of the human skull. Skull and bones is "Totenkopf mit Knochen" in German. Use of the symbol as a military insignia began with the cavalry of the Prussian army under Frederick the Great. Frederick formed Husaren-Regiment Nr. 5 (von Ruesch), a Hussar regiment commanded by Colonel von Ruesch. These Hussars adopted a black uniform with a Totenkopf emblazoned on the front of their mirlitons and wore it on the field in the War of Austrian Succession and in the Seven Years' War. In 1808, when the regiment was reformed into Leib-Husaren Regiments Nr. 1 and Nr. 2, the Totenkopf remained a part of the uniform.[1] During the Napoleonic Wars, when Frederick William, Duke of Brunswick-Wolfenbüttel, was killed in battle, his troops changed the colour of their uniforms to black or apple green, with a Totenkopf on their shakos in mourning their dead leader (Other sources claim that the "Black Brunswickers" were so equipped while Friedrich Wilhelm of Brunswick lived, as a sign of revenge on the French. The skull continued to be used throughout the Prussian and Brunswick Armed forces until 1918, and some of the stormtroopers that led the last German offensives on the Western Front in 1918 used skull badges. The Totenkopf was used in Germany throughout the inter-war period, most prominently by the Freikorps. In 1933, it was in use by the regimental staff and the 1st, 5th, and 11th squadrons of the Reichswehr's 5th Cavalry Regiment as a continuation of a tradition from the Kaiserreich. In the early days of the NSDAP, Julius Schreck, the leader of the Stabswache (Adolf Hitler's bodyguard unit), resurrected the use of the Totenkopf as the unit's insignia. This unit grew into the Schutzstaffel (SS), which continued to use the Totenkopf as insignia throughout its history. According to a writing by Reichsführer-SS Heinrich Himmler the Totenkopf had the following meaning:

"The Skull is the reminder that you shall always be willing to put your self at stake for the life of the whole community."

The Totenkopf was also used as the unit insignia of the Panzer forces of the German Heer (Army), and also by the Panzer units of the Luftwaffe, including those of the elite Fallschirm-Panzerdivision Hermann Göring. Both the 3rd SS Panzer Division of the Waffen-SS, and the World War II era Luftwaffe's 54th Bomber Wing Kampfgeschwader 54 were given the unit name "Totenkopf", and used a strikingly similar-looking graphic skull-crossbones insignia as the SS units of the same name.[2]