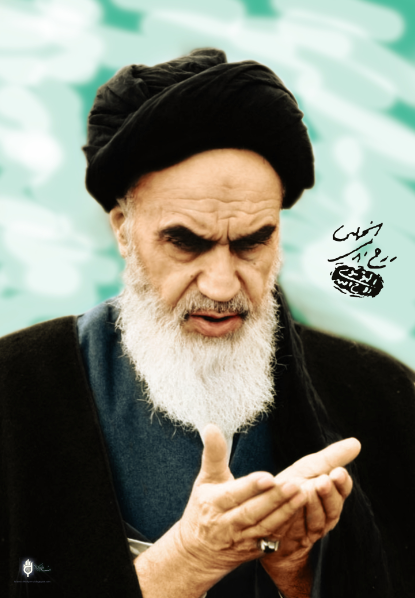 Ayatollah Khomeini born as Ruhullah Musawi Khomeini on 24 September 1902 (also the anniversary of the birth of Hazrat Fatima), in the small town of Khumayn, some 160 kilometers to the southwest of Qum. He died on 3 June -1989, in Tehran, Iran. World fame Iranian religious leader, philosopher and politician.

He was the child of a family with a long tradition of religious scholarship. His ancestors, descendants of Imam Musa al-Kazim, the seventh Imam of the Ahl al-Bayt, had migrated towards the end of the eighteenth century from their original home in Nishapur to the Lucknow region of northern India. There they settled in the small town of Kintur and began devoting themselves to the religious instruction and guidance of the region’s predominantly Shia population. Imam Khomeini’s grandfather, Sayyid Ahmad, left Lucknow sometime in the middle of the nineteenth century on pilgrimage to the tomb of first Imam Ali Ibn Abi Talib, in Najaf - Iraq. While in Najaf, Sayyid Ahmad made the acquaintance of a certain Yusuf Khan, a prominent citizen of Khumayn. Accepting his invitation, he decided to settle in Khumayn to assume responsibility for the religious needs of its citizens and also took Yusuf Khan’s daughter in marriage. [1]

When he was about five months old, his father was killed on the orders of a local landlord. The young Khomeini was raised by his mother and aunt and then, after their deaths, by his older brother, Mortaza (later known as Ayatollah Pasandideh). He was educated in various Islamic schools, and he settled in the city of Qom. About 1930 he adopted the name of his home town, Khomayn (also spelled Khomeyn or Khomen), as his surname. As a Shi’ite scholar and teacher, Khomeini produced numerous writings on Islamic philosophy, law, and ethics, but it was his outspoken opposition to Iran’s ruler, Mohammad Reza Pahlavi, his denunciations of Western influences, and his uncompromising advocacy of Islamic purity that won him his initial following in Iran. In the 1950s he was acclaimed as an Ayatollah, or major religious leader, and by the early 1960s he had received the title of grand Ayatollah, thereby making him one of the supreme religious leaders of the Shi’ite community in Iran [2]

The period from 1962 to 1979, as a Grand Ayatollah is covered by his political activism which was greatly influenced by his strict, religious interpretation of Shia Islam. He practically launched his fight against the shah's regime (monarchy), which led to the eruption of a religious and political rebellion (revolution) in 1963. This event is regarded by the revolutionists as the turning point in the history of the Islamic movement in Iran. The King Raza Shah Pahlevi bloody humiliating of the uprising was followed by the exile of Ayatollah Khomeini to Iraq in 1964 (1965). Settling in Iraq, Khomeini continued his outspoken denunciations, developing a strong religious and political following abroad, until forced by the then President Saddam Hussein in 1978 to leave Iraq; he then moved to France. Following the revolution that deposed Muhammad Reza Shah Pahlevi, Khomeini returned triumphantly to Iran in 1979, declared the state as an Islamic republic [3]. Ayatollah Khomeini was the founder and supreme leader of the Islamic Republic of Iran. The only leader in the Muslim world who combined political and religious authority as a head of state.

Ayatollah Khomeini in his 10 years of leadership established a theocratic rule over Iran. He did not fulfill his pre-revolution promises to the people of Iran but instead he started to marginalize and crash the opposition groups and those who opposed the clerical rules. He ordered establishment of many institutions to consolidate power and safeguard the cleric leadership. During his early years in power he launched the Cultural Revolution in order to Islamize the whole country. Many people were laid off, and lots of books were revised or burnt according to the new Islamic values. Newly established Islamic Judiciary system sentenced many Iranians to death and long-term imprisonment as they were in opposition to those radical changes [4].

However, his critics ignore the fact that his 10 years as Supreme Religious and State leader, 08 years were wasted in Iran-Iraq war, cost of which led to government debt and inflation, eroding personal incomes, and unprecedented unemployment. This situation is self sufficient to evaluate the available time for fulfillment of Promises or Planned destination for Rehabilitation and replacement of systems towards modern Cultural Revolution in order to Islamize the whole country in accordance with the requirement of the technological and global village era.

Brief History Prior to triumph

(iii)Exiled from Iraq to France from 1978 to 1979. From then the image and the words of the Ayatollah Khomeini soon became a daily feature in the world's media

(iv)Return to Iran: Grand Ayatollah Khomeini embarked on a chartered airliner of Air France on the evening of January 31 and arrived in Tehran the following morning. He was received with a historical warm welcome from Iranian general people and revolutionists.

In his position as an enlightened Marja-e-Taqleed Ayatollah Khomeini demonstrated the true teachings of the pure Islam of Holy Prophet and the precious heritage of the tradition of the Prophet and the teaching & guidance of the infallible Imams reflecting role of women their responsibilities and identity in Muslim society. A message delivered by Ayatollah Khomeini is reproduced below:

I convey my best wishes and felicitations to the noble nation of Iran, in particular the respected women, on the immensely happy occasion of the birthday of Fatima Zahra, the most felicitous day to commemorate Women’s Day. This joyous birthday occurred in a place and time when women were not considered to be human beings and their very existence was seen as a source of shame for families among the different tribes of the pre-Islamic times. In such a corrupt and barbaric environment, the great Prophet of Islam took woman’s hand and delivered her from the slough of pagan customs. The history of Islam testifies to the limitless respect the Messenger of God, peace and blessings be upon him and his descendants, showed this noble infant, so as to demonstrate that woman has a special greatness in society, and if she is not superior to man, she is certainly no less than him. So this day is the day of woman’s revivification and the day to establish her honor and the great role she plays in society. (Message/speech 14th April, 1982) [8]

After 34 years of Iranian Revolution, the role of women in the present day Iran is an open example of fact and claim as it can be seen that women enjoy equal status e.g. in voting, education, employment etc, even in the religious quantum for instance:

There are a few women who are equal in ranking to the ayatollahs, and are known as Lady Mujtahideh (for details see: Künkler, Mirjam and Fazaeli, Roja, The Life of Two Mujtahidahs: Female Religious Authority in 20th Century Iran - July 12, 2010, Available at SSRN) [9]. The most outstanding in recent history was Nosrat Amin, also known as Banu Isfahani. Current examples of the Lady Mujtahidehs are Zohreh Sefati and Lady Ayatollah Aatieh Hassani also known as Imam'ah Al-Hassani daughter of Grand Ayatollah Gholamreza Hassani. Historically, there have been several Mujtahidehs in Shi'ism, most famously the women in the family of Allama Hilli, as well as the Baraghani family of 19th century Qazvin [10]

Born on 24 September -1902 and Died on 3 June -1989, in Tehran Iran, from prostate cancer. Ayatollah Khomeini designated President Ali Khamenei to succeed him.