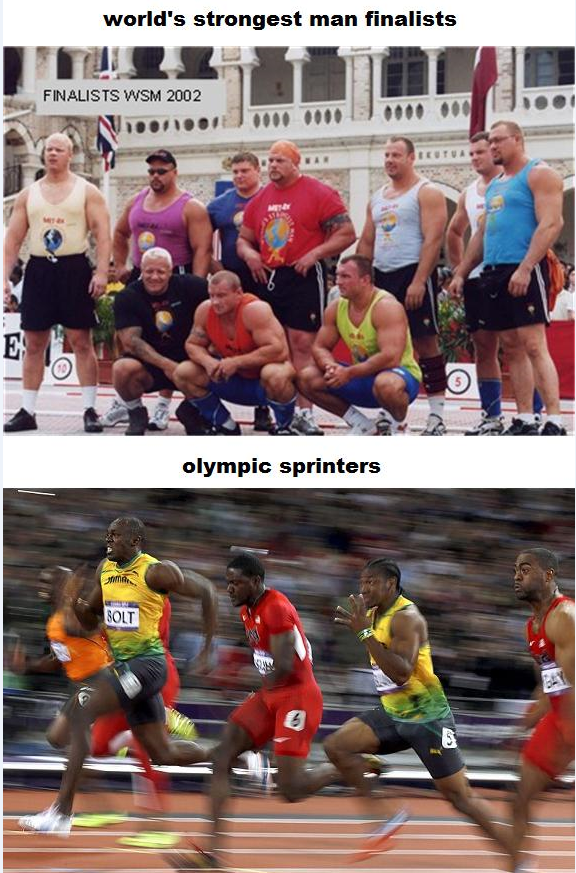 The relationship between race and sports and the observed differences in racial performance in different sports have caused debate.

Race and Sport: Evolution and Racial Differences in Sporting Ability

Race and Sport: Evolution and Racial Differences in Sporting Ability is 2016 review book by Edward Dutton and Richard Lynn. Among other topics, it discusses relationships between body types, race, and sports.[3]

"Dutton and Lynn examine women’s sports as well. Since men are better at all kinds of athletic contests than women, the women who achieve at the highest levels tend to be less feminine than average. Also significant are racial differences in sexual dimorphism: African women and others from tropical regions are less distinct from their men than are women closer to the Arctic. Dutton and Lynn examine data concerning the best male and female performers in over fifty sports and compare them with predictions based on the physical traits of each of these racial groups. [...] Intelligence may also explain why Whites continue to dominate quarterbacking in American football and coaching in basketball, sports otherwise dominated by Blacks."[3]

A 1994 study examined 32 English sport/exercise science textbooks and found that 7 (21.9%) argued that there are biophysical differences due to race that explain differences in sports performance, 24 (75%) did not mention nor refute the concept, and 1 (3.12%) expressed caution with the idea.[4]

A 2010 study examined 18 widely used English anatomy textbooks and found that every one relied on the existence of races. The study gave examples of how the textbooks stated that anatomical features vary between races.[5]

The world records for running tend to be set by Blacks. The world records for swimming tend to be set by Whites. This may be due to a different center of mass for Whites and Blacks. For Blacks, it is on average 3 percent higher above the ground than for Whites. This is argued to mean that Blacks on average hold a 1.5 percent speed advantage in running, while Whites hold a 1.5 percent speed advantage in swimming.[6]

Another proposed explanation for racial differences regarding running is that races with larger average cranial/brain size have pelvis structures that are suitable during childbirth for the larger cranial/brain size, but at the same time are less efficient for running.[7]

Studies on basketball have found higher frequency of penalties for Black than for White players.[8]

Politically correct explanations for the observed racial sport differences include differences in cultural preferences, differences in resources with some sports requiring more resources to participate in which may be lacking in poor areas and nations, differences in physical environment such as living and training at high attitudes causing non-genetic bodily changes, and discrimination.

In China, the proposition that there are genetic differences affecting sports performance has been stated to be widely accepted. During the 2004 Summer Olympics, the People's Daily wrote that Chinese are "suited" to sports like Ping-Pong, badminton and gymnastics that require agility and technique. However, the newspaper argued, Chinese have "congenital shortcomings" and "genetic differences" that means they are disadvantaged at purely athletic events. The success of hurdler Liu Xiang has been explained as due to hurdling also requiring technique, which fits with the stereotype that Chinese are disciplined and smart. A researcher with the China Institute of Sports Science, Li Aidong, said that sports coaches believe Chinese athletes could also be successful in long jumping, high jumping and speed walking. But she doubted Chinese could compete in pure sprinting.[10]

In 2018, China stated plans for genetic screening of top athletes. One company stated that this was already occurring.[11]

The United States Olympic Committee attempts to increase the number of non-Whites sent to the Winter Games.[12]

Various countries attempt to increase the number of non-White coaches in various sports.

There seems to be no affirmative action in favor of Whites, despite being under-represented in various sports.

In the United States, good athletes are often given preferential treatment on college admissions, being admitted despite having standardized tests scores on average below that of other students. This especially regarding large revenue-generating sports, such as basketball and football. A 2018 report evaluated all of the 65 universities that make up the “power five conferences”, which have teams that compete in revenue-generating sports. At those schools, Black men were only 2.5% of enrolled students, but were 56% of men’s basketball teams and 55% of men’s football teams.[13]

NBA basketball salaries were in a 2001 study high for White players compared with their actual performance. However, this may in part be due to viewer preferences. Viewership increases when there is greater participation by White players, which means higher advertising incomes. This explains much of the salary gap.[14]

Non-White sport performers are often used for propaganda purposes. Mass immigration is justified by pointing to non-Whites who perform well in international competitions for their new country. National teams where persons of different races cooperate are seen as a model for society. Idolization of non-White sport performers, especially by young people, bring further acceptance. In general, the artificially created sports world arguably gives a very misleading impression of the range of racial differences and problems found in the real world.

Similarly to the rest of the mainstream media, sports reporting has been argued to have become increasingly leftist and anti-White.[15]

Part of this article consists of modified text from Wikipedia, and the article is therefore licensed under GFDL.
Retrieved from "http://en.metapedia.org/m/index.php?title=Race_and_sports&oldid=453664"
Categories: