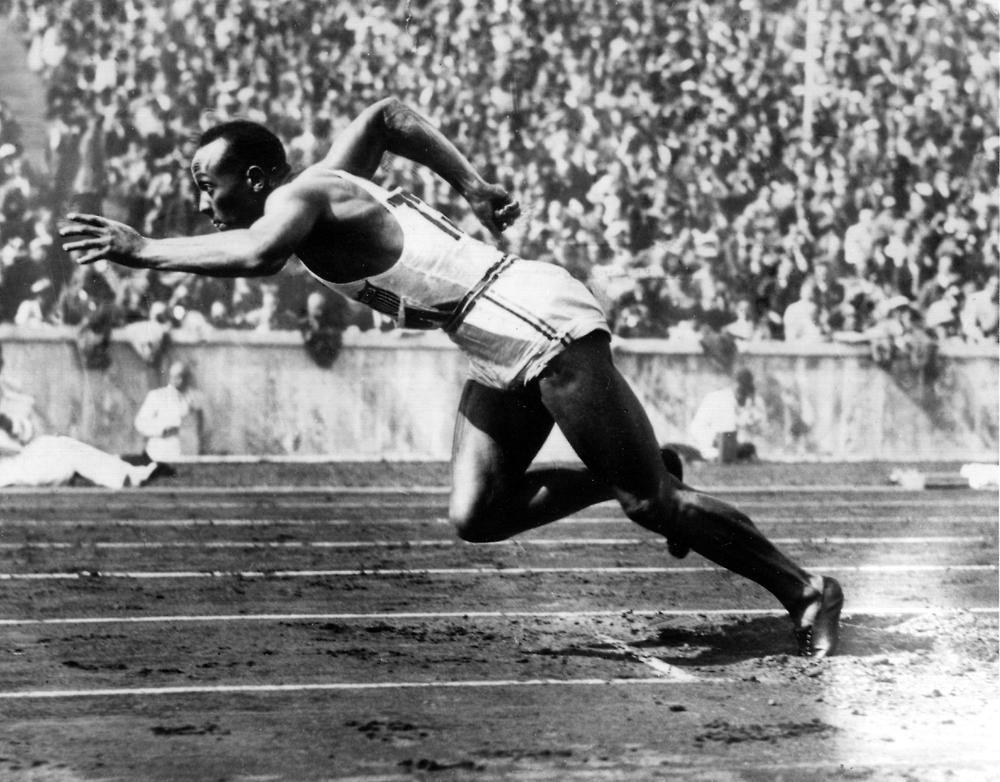 Jesse Owens 1936 with his new Dassler-Schuhe, the kind, the world had never seen. Owens had a contract with Adolf „Adi“ Dassler from the „Sportschuhfabrik Gebrüder Dassler“. This company would be known as "Adidas" beginning 1949.

James "Jesse" Cleveland Owens (b. 12 September 1913 in Oakville, Alabama; d. 31 March 1980 in Tucson, Arizona) was an American track and field athlete and four-time Olympic gold medalist in the 1936 Berlin Olympics. According to politically correct descriptions, Adolf Hitler was furious when Owens won; Hitler refused to shake hands with Owens because he was Black; the Germans were embarrassed because the Owens victory “disproved” German ideas about racial differences, and so on. This has been criticized as false myths.[1] 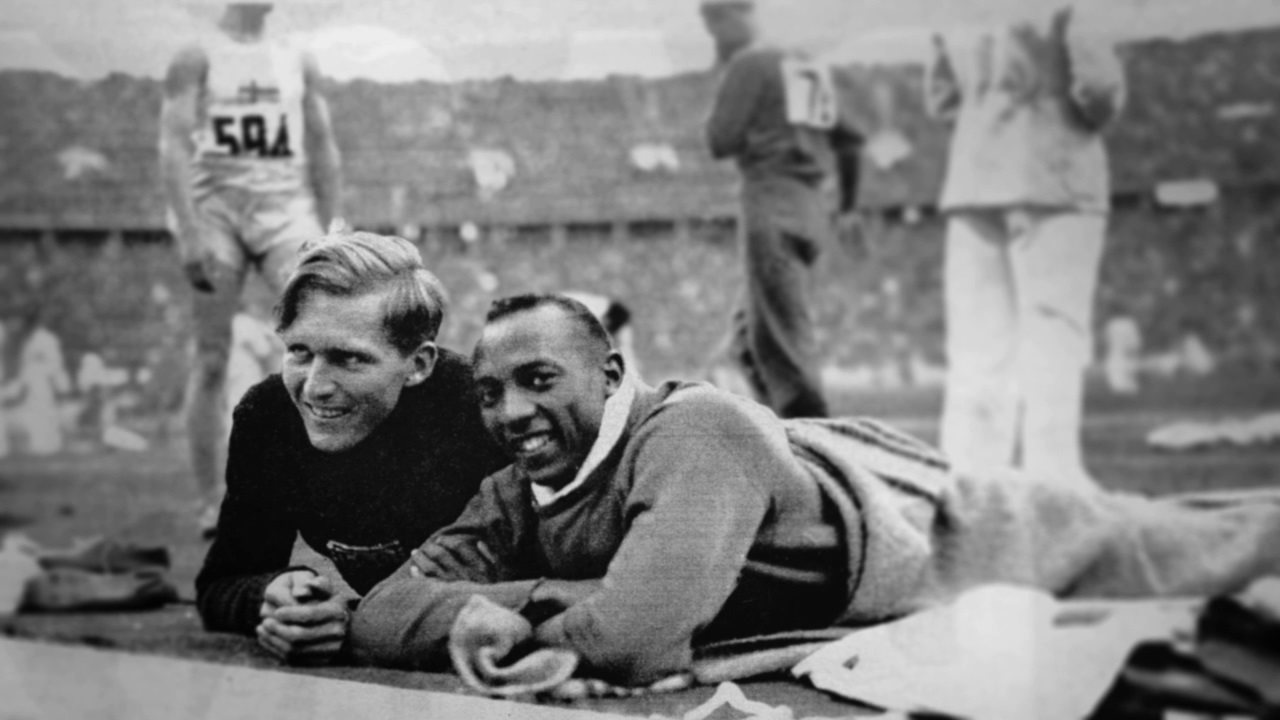 Luz Long and Jesse Owens; On 4 August 1936, the day of the long jump competition, Jesse Owens was unexpectedly in trouble. In the morning qualifying session he had two foul jumps, leaving him with one chance to record the necessary distance of 7.15 m, usually comfortably within his range. Then Luz Long, Germany's great hope and Owens's chief rival for gold, introduced himself to the American and recommended he set his run-up marker back a foot or so in order to be sure of recording a legal jump. Owens did so and sailed into the final. In the final Owens took an early lead with a jump of 7.74 m but Long went ahead in the penultimate round, leaping out to 7.87 m. Owens responded in sensational style with 7.9 4m in the fifth and 8.06 m in the sixth and final round. Luz was the first to congratulate him and they took a lap of honor around the stadium together as the crowd rose to salute them both. 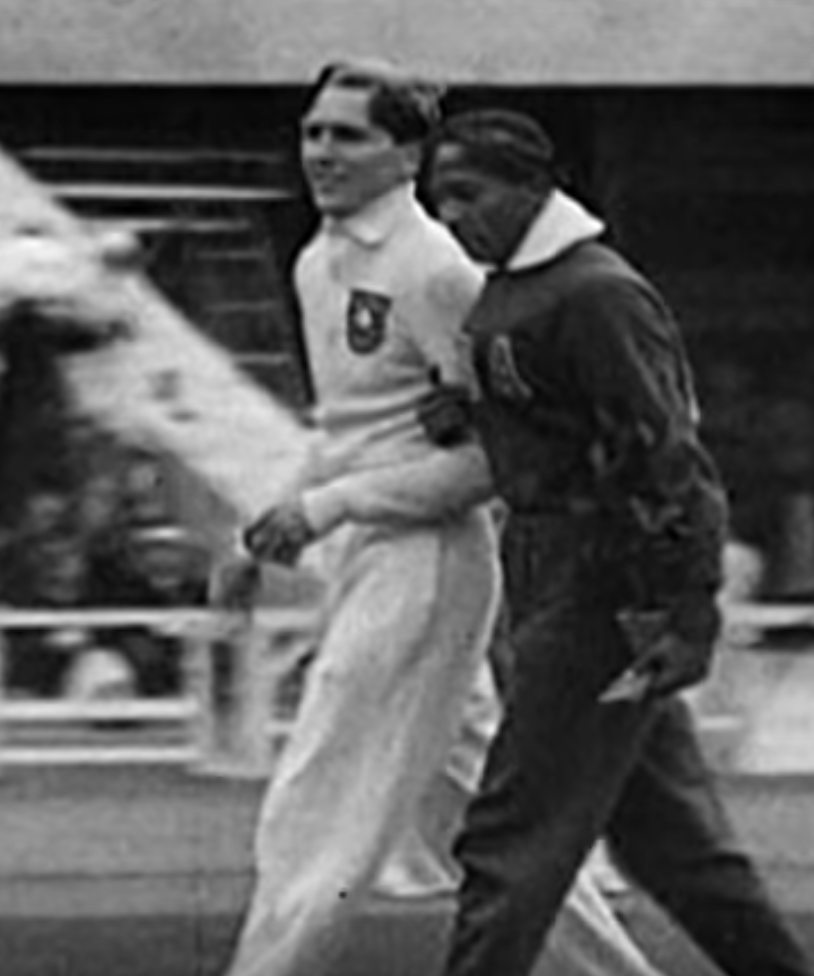 The photo shows Luz Long walking arm in arm with Jesse Owens through the Berlin Olympic Stadium following the long jump competition on day 3 of the sporting competitions during the 1936 Berlin Summer Olympics on 4 August 1936. Tens of thousands of Germans cheered them on and on.

Jesse set or tied national high school records in the 100 yard dash, 200-yard dash, and the long jump. After a stellar high school career, he attended Ohio State University. On May 25, 1935, at the Big Ten Conference Championships in Ann Arbor, Michigan, Owens broke three world records (long jump, 220-yard dash and 220-yard low hurdles) and tied a fourth (100-yard dash), all in a 45 minute span. In his junior year at Ohio State, Owens competed in 42 events and won them all, including four in the Big Ten Championships, four in the NCAA Championships, two in the AAU Championships and three at the Olympic Trials.

In 1936, Jesse became the first American in Olympic Track and Field history to win four gold medals in a single Olympiad by winning four gold medals: 100 meter dash in 10.3 seconds (tying the world record), long jump with a jump of 26' 5 1/4" (Olympic record), 200 meter dash in 20.7 seconds (Olympic record), and 400 meter relay (first leg) in 39.8 seconds (Olympic and world record). In 1976, Jesse was awarded the Presidential Medal of Freedom, the highest award bestowed upon a civilian, by Gerald R. Ford.

Anti-National Socialist Propaganda forwarded the lie that Hitler ignored Jesse Owens. But in his autobiography "The Jesse Owens Story", Jesse Owens states like this about Hitler:

"When I passed the Chancellor he arose, waved his hand at me, and I waved back at him. I think the writers showed bad taste in criticizing the man of hour in Germany."

President Franklin D. Roosevelt never invited Jesse Owens to the White House or hold a ticker tape parade in his honor which is customary for American athletes. It was Adolf Hitler who sent Owens “a commemorative inscribed cabinet photograph of himself.” And according to the MailOnline.co.uk, legendary sports reporter Siegfried Mischner, 83, Owens carried around a photograph of Hitler in his wallet. Mischner reported that in the 1960’s, Owens was desperately trying to change the unfair reports on the Führer’s attitude towards him and was trying to get journalists to report on the truth of what really happened at the 1936 Olympic games. Mischner told the MailOnline.co.uk:

“It {the photograph} was taken behind the honor stand and so not captured by the world’s press. But I saw it, I saw him shaking Hitler’s hand.”

Owens always proclaimed that he was treated better in Germany than in the United States where Blacks faced segregation and unbearable discrimination [2]. Unlike America, Germans were big fans of Jesse Owens and cheered Jesse Owens in 1936 Olympics.

Jesse Owens and German sports star as well as jurist Dr. jur. Carl Ludwig „Luz“ Hermann Long became close friends. Owens went on to win the gold medal in the long jump with 8.06 metres (26'5¼") while besting Long's own record of 7.87 metres (25'9¾"). Long won the silver medal for second place and was the first to congratulate Owens: they posed together for photos and walked arm-in-arm to the dressing room. Owens said:

"It took a lot of courage for him to befriend me in front of Hitler... I would melt down all the medals and cups I have and they wouldn't be a plating on the twenty-four karat friendship that I felt for Luz Long at that moment".

Long's competition with Owens is recorded in Leni Riefenstahl's documentary "Olympia – Fest der Völker." In the evenings, Luz would take Jesse home to his family. He also showed him Berlin's night life. Later, they would write each other letters, both addressing them with "Dearest friend". Even after WWII started, they wrote each other. Luz Long became a Paratrooper of the Luftwaffe Division "Hermann Göring", who fought in North Africa and on Sicily, were he fell on 14 July 1943 during the Operation Husky. Luz left behind wife Gisela, née Behrens, son Kai-Heinrich Long (1941–2021) and son Wolfgang (1943–1944), who he had never seen.

In his last letter, Long wrote to Owens and asked him to contact his son Kai-Heinrich after the war and tell him about his father and "what times were like when we were not separated by war. I am saying—tell him how things can be between men on this earth". After the war, Owens travelled to Germany to meet Kai-Heinrich "Karl" Long. Long is seen with Owens in the documentary "Jesse Owens Returns To Berlin" (1964), where he is in conversation with Owens in the Berlin Olympic Stadium.[3]