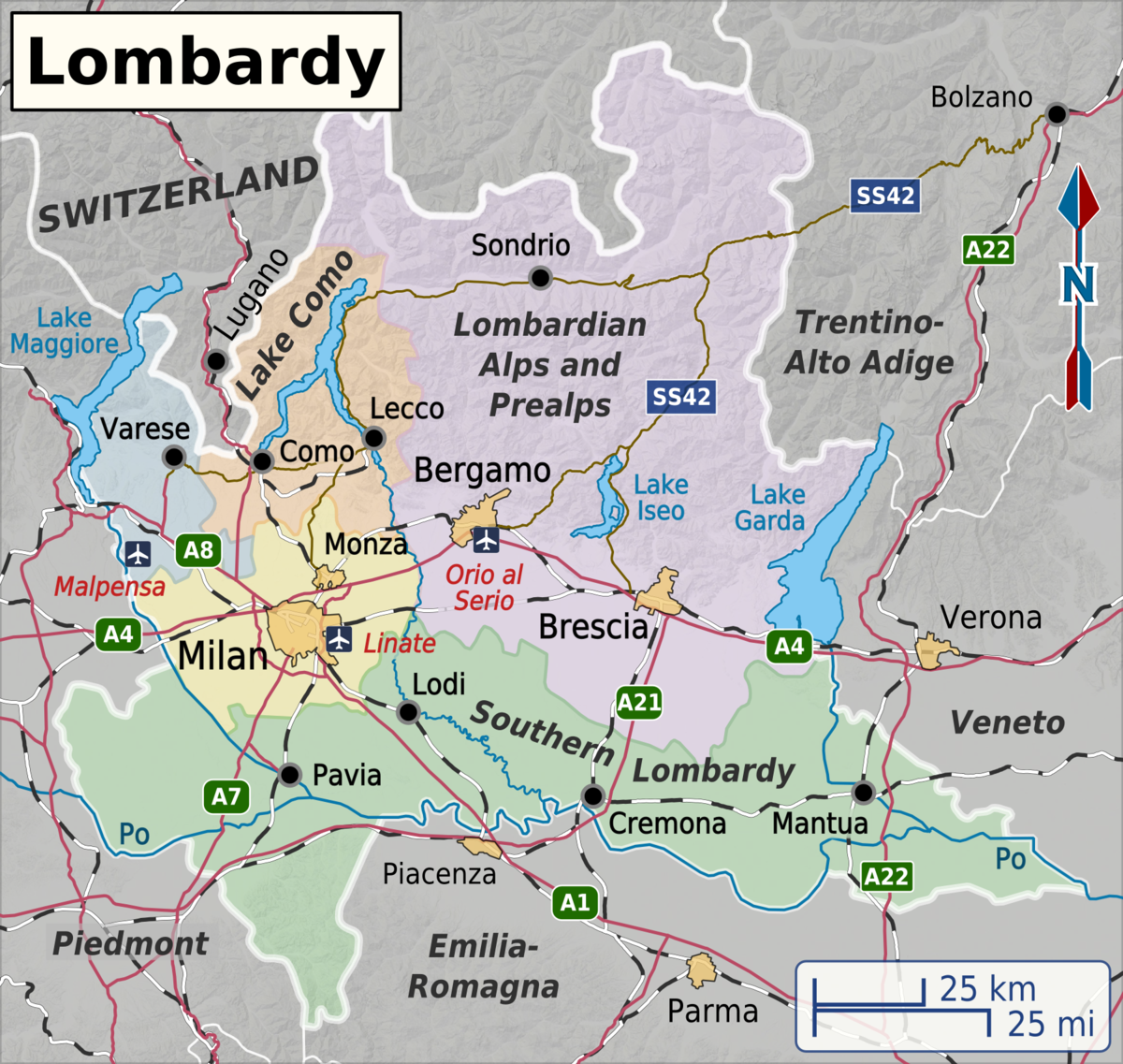 Lombardy is one of the 20 Regions of Italy. The capital is Milan. One-sixth of Italy's population lives in Lombardy and about one fourth of Italy's GDP is produced in this Region. The languages are Italian, Western Lombard and Eastern Lombard. The religion is Catholic, of Ambrosian rite or Roman rite. 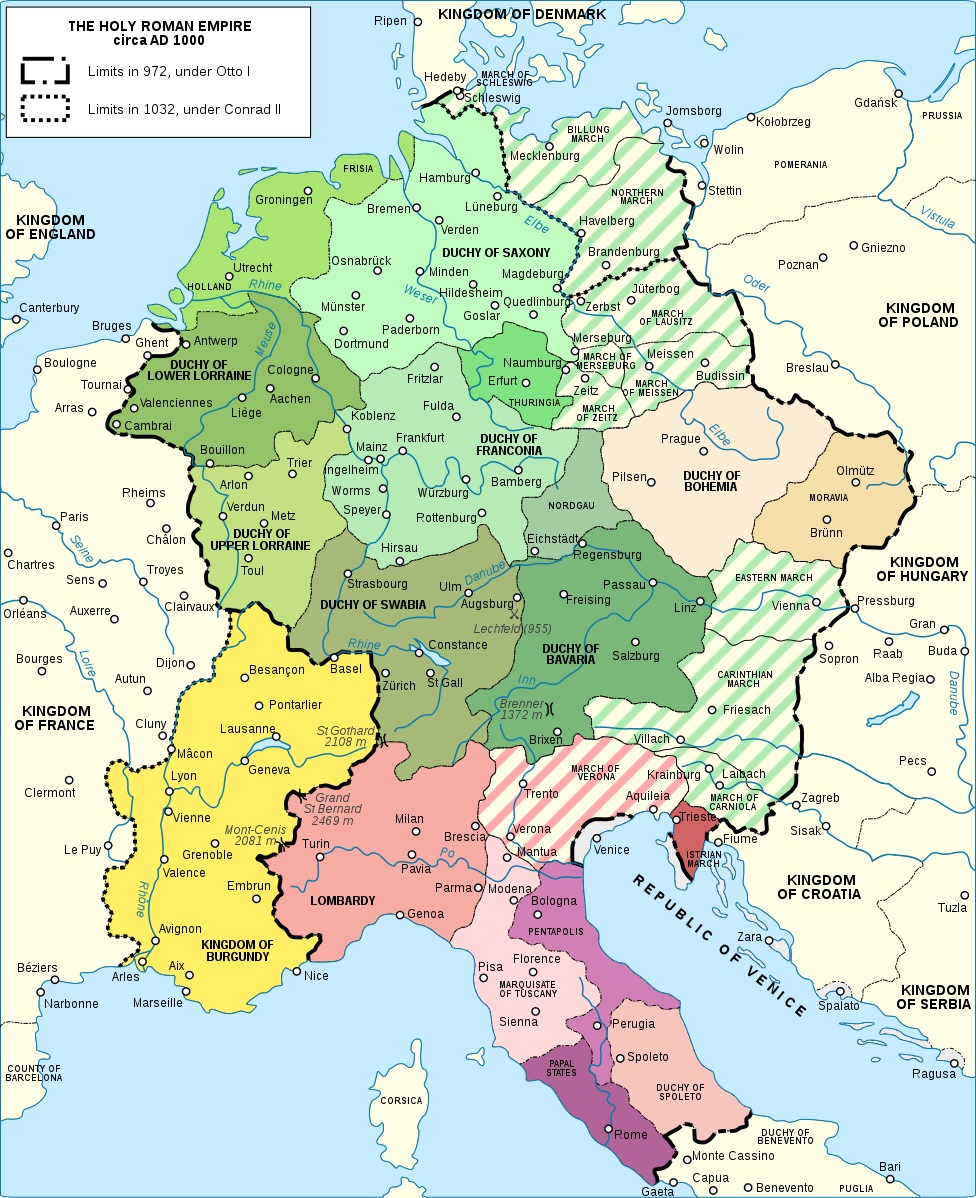 The area of current Lombardy was settled at least since the 2nd millennium BC, as shown by the archaeological findings of ceramics, arrows, axes and carved stones. In the following centuries it was inhabited first by some Etruscan tribes, who founded the city of Mantua and spread the use of writing; later, starting from the 5th century BC, the area was invaded by the Celt (Gaul) tribes. This people founded several cities (including Milan) and extended their rule to the Adriatic Sea. Their development was halted by the Roman expansion in the Padan Plain from the 3rd century BC onwards: after centuries of struggle, in 194 BC the entire area of what is now Lombardy became a Roman province with the name of Gallia Cisalpina ("Gaul on the nearer side of the Alps").

The Roman culture and language overwhelmed the former civilization in the following years, and Lombardy became one of the most developed and rich areas of Italy with the construction of a wide array of roads and the development of agriculture and trade. Important figures like Pliny the Elder (in Como) and Virgil (in Mantua) were born here. In late antiquity the strategic role of Lombardy was emphasized by the temporary moving of the capital of the Western Empire to Milan. Here, in 313 AD, emperor Constantine issued the famous edict that gave freedom of confession to all religions within the Empire.

During and after the fall of the Western Empire, Lombardy suffered heavily from destruction brought about by a series of Germanic invasions. The last and most effective was that of the Lombards, or Longobardi, who came around 570s.[1] and whose long-lasting reign (whose capital was set in Pavia) gave the current name to the region. There was a close relationship between the Frankish, Bavarian and Lombard nobility for many centuries.

After the initial struggles, relationships between the Lombard people and the Latin-speaking people improved. In the end, the Lombard language and culture assimilated with the Latin culture, leaving evidence in many names, the legal code and laws among other things. The end of Lombard rule came in 774, when the Frankish king Charlemagne conquered Pavia and annexed the "Kingdom of Italy" (mostly northern and central Italy) to his empire. The former Lombard dukes and nobles were replaced by other German vassals, prince-bishops or marquises. However, to this day the population is still the descendents of Lombards.

The 11th century marked a significant boom in the region's economy as part of the Holy Roman Empire, due to improved trading and, mostly, agricultural conditions. In a similar way to other areas of Italy, this led to a growing self-acknowledgement of the cities, whose increasing richness made them able to defy the traditional feudal supreme power, represented by the German emperors and their local legates. This process reached its apex in the 12th and 13th century, when different Lombard Leagues formed by allied cities of Lombardy, usually led by Milan, managed to defeat the Hohenstaufen emperor Frederick I, at Legnano, and his grandson Frederick II, at Parma.

This did not prevent other important Lombard centres, like Cremona (then rivalling Milan for size and wealth) and others, from supporting the imperial power if this could grant them an immediate advantage. Taking advantage of the flourishing agriculture, the area around the Po River, together with Venice and Tuscany, continued to expand its industry and commerce until it became the economic centre of the whole of Europe. The enterprising class of the communes extended its trade and banking activities well into northern Europe, and the name "Lombardy" came to designate the whole of Northern Italy until the 15th century.

From the 14th century onwards, the instability created by the unceasing internal and external struggles ended in the creation of noble seignories, the most significant of which were those of the Viscontis (later Sforzas) in Milan and of the Gonzagas in Mantua. In the 15th century the Duchy of Milan was a major political, economical and military force at the European level. Milan and Mantua became two centres of the Renaissance whose culture, with men like Leonardo da Vinci and Mantegna, and pieces of art were highly regarded (as The Last Supper by Leonardo Da Vinci). This richness, however, attracted the now more organized armies of national powers like France and Austria, which waged a lengthy battle for Lombardy in the late 15th-early 16th century.

After the decisive battle of Pavia (1525), the Duchy of Milan became an possession of the House of Habsburg, which was passed on to the royal Austrian Habsburgs of Spain: the new rulers did little to improve the economy of Lombardy, instead imposing a growing series of taxes needed to support their unending series of European wars. The eastern part of modern Lombardy, with cities like Bergamo and Brescia, was under the Republic of Venice, which had begun to extend its influence in the area from the 14th century onwards (see also Italian Wars).

Pestilences (like that of 1648, described by Alessandro Manzoni in his I Promessi Sposi) and the generally declining conditions of Italy's economy in the 17th and 18th centuries halted the further development of Lombardy. In 1706 the Austrians came to power and introduced some economical and social measures which granted a certain recovery. Their rule was smashed in the late 18th century by the French armies, however, and Lombardy became one of the semi-independent provinces of the Napoleonic Empire.

The restoration of Austrian rule in 1815, in the form of the puppet state called Kingdom of Lombardy-Venetia, had however to contend with new social ideals introduced by the Napoleonic era. Lombardy became one of the intellectual centres of the process which led to the Unification of Italy. The popular republic of 1848 was short-lived, and Lombardy was annexed to the Kingdom of Italy 1859 as a result of the Second Italian Independence War. Starting from the late 19th century, and with a boom after World War II, Lombardy confirmed its status as the most economically developed area of Italy.