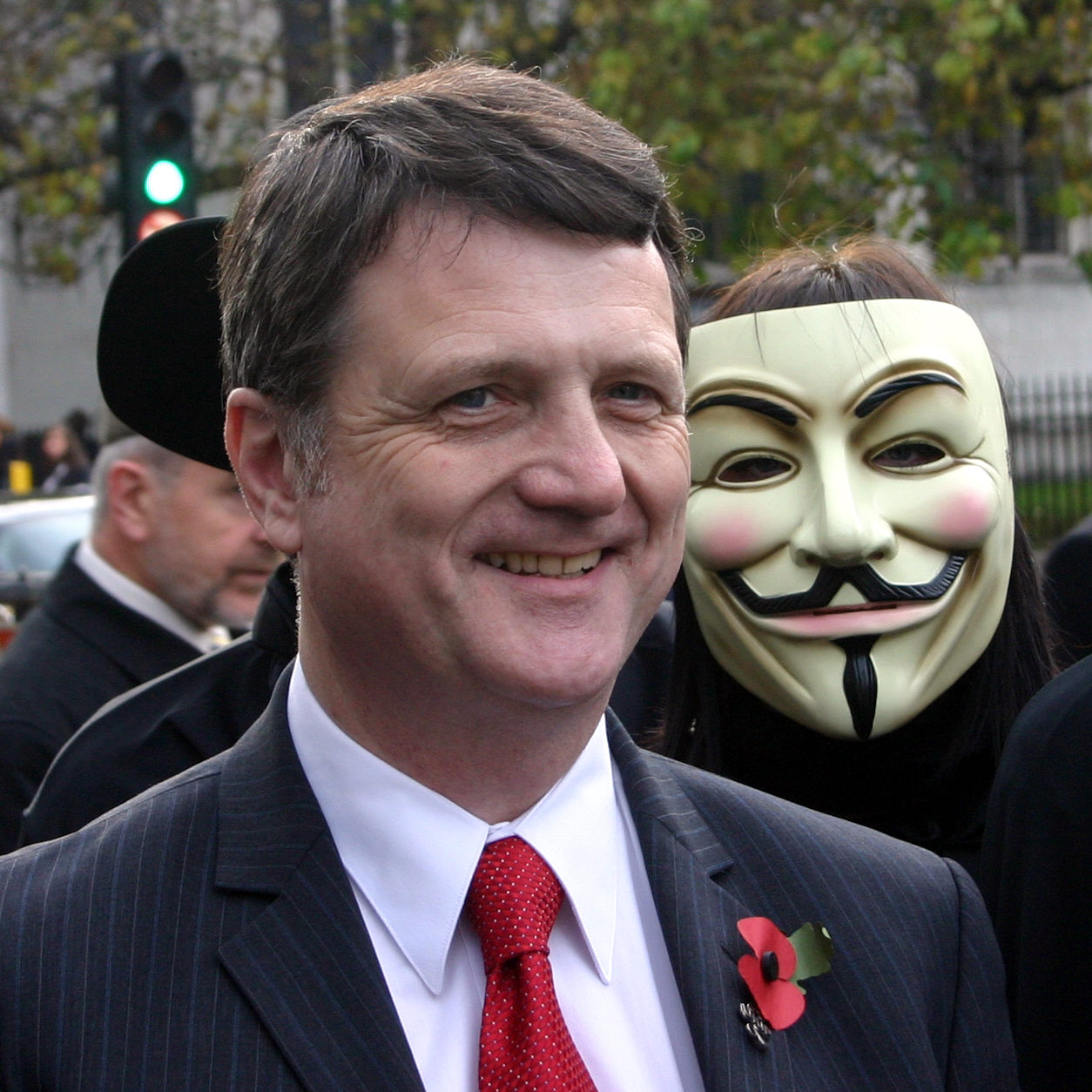 Gerard Batten was a member of the Anti-Federalist League, an early Eurosceptic cross-party political alliance, from 1992 to 1993,[2] when he co-founded the UKIP.

He was the UKIP's first Party Secretary, from 1994 to 1997. He has fought local elections, a by-election, and two UK General Elections. He was first elected a Member of the European Parliament in June 2004, and for a second five-year term in June 2009. He sat on the European Parliament's Civil Liberties Justice and Home Affairs Committee. He campaigned against the European Arrest Warrant and the development of the EU's 'common legal instruments' that were destroying England's centuries old liberties and protections against unjust arrest and imprisonment.

At the 2007 UK Independence Party conference, he was selected as the party's candidate to contest the London mayoral election, 2008.[3] He stood in the 2009 UKIP leadership election,[4] coming second with 26% of the vote.

In a token protest against Theresa May as Prime Minister of Britain, Batten was the official UKIP candidate standing against her in the Maidenhead constituency at the 2017 general election. A renowned conservative constituency, out of thirteen candidates, he finished in fifth place with only 1.5% share of the vote.[5]

On 14 April 2018, Gerard Batten was elected unopposed as the Leader of UKIP. In a statement issued upon his appointment as Leader he said: "I received the backing of all three UKIP Lords, our major donors, our MEPs, our London and Welsh Assembly Members, and party activists and members from all over the UK."[6] Under Batten, UKIP witnessed a resurgence in support during his first six months as Leader. Opinion polls showed UKIP back between six and eight percent of the vote - with one (YouGov) revealing that almost a quarter of 2017 Conservative voters (23%) now considered UKIP to be the best party to handle Brexit, this was almost double the figure it had been in previous polling. Likewise, the proportion of 2017 Conservative voters who think that UKIP would be the best party to handle asylum and immigration had risen from 16% to 28% over the same time period.[7] In addition to good polling, UKIP also saw its membership numbers rise further and reportedly by 15% during the month of July alone, with thousands of new activists joining the ranks of the party.[8] Many of the new members cited Batten's leadership and the perceived mismanagement of Britain's EU Exit by the Conservative Government as major factors in their joining.[9]

Batten tried to revitalise the party. This brought him into continued conflict with the hard Liberals and Libertarians in the UKIP who had always been opposed to, amongst other things, his hard line on immigration, and to the UKIP admitting as members several known radicals. In addition, former party leader Nigel Farage announced that he would be setting up a new Brexit Party in opposition to the UKIP. On 24 May 2019, Mike Hookem resigned as UKIP deputy leader and announced his candidacy in the upcoming UKIP leadership election, criticising Batten's leadership, saying: "Mr Batten's policy direction and associations have given the mainstream media the ammunition to label our party 'extreme' and 'far-right', accusations I do not believe to be true".[10]

Batten's extended term as UKIP leader ended on 2 June 2019, triggering a leadership election.[11] On 27 June 2019, the closing date for nominations, Batten announced that he was standing for re-election to the party's leadership,[12] but on 7 July 2019, UKIP's National Executive Committee passed a motion prohibiting him from doing so on the grounds that 'he had brought the party into disrepute' during his previous tenure in the position.[13][14][15]

Batten was appointed a member of the European Parliament's Subcommittee on Security and Defence in July 2004 until 2009, during which time he wrote on how Britain's defences were being gradually subsumed into a European defence force - a European Army. In 2007 he co-Chaired UKIP's Defence Policy Committee with Rear-Admiral Richard Heaslip. The Committee's recommendations were later published as the Party's Defence Policy. Shortly afterwards Batten was appointed UKIP's official spokesman on Security and Defence. In this role he attacked the Labour Party government's plans to introduce Identity Cards.[16]

In 2007 he was Chairman of UKIP's Immigration Policy Committee, and authored (with the assistance of Fiona Wise, Professor Stephen Bush & Lynnda Robson) the policy paper that was delivered to the Party later that year. It was revised and updated and published in March 2010 as a quality 50 page A5 booklet entitled Immigration: Action Overdue. (Ironically, Batten's second wife is a Filipino). He wrote a UKIP Immigration Update 'Discussion Document' in September 2013 where, under the sub-heading "Overcrowded Britain:Unsustainable Population Growth" he estimated that the UK's population would be over 73 million by 2035 and that "the majority of this population growth can be shown to be due to immigration and births to immigrants. The continuous population growth is simply unsustainable." He called for a new Ministry of Immigration and a Minister directly responsible to the Prime Minister and said the UK should withdraw from the European Convention of Human Rights and repeal the UK Human Rights Act (1998).

In April 2006, Batten stated that a London constituent and former FSB agent, Lieutenant-Colonel Alexander Litvinenko, had been told that Italian Prime Minister and former President of the European Commission, Romano Prodi, had been the KGB's "man in Italy", demanding an inquiry into the allegations. Batten told the European Parliament that Litvinenko had been warned by FSB deputy chief General Anatoly Trofimov that there were numerous KGB agents among Italian politicians, and that "Romano Prodi is our man in Italy". According to the Brussels-based newspaper EU Reporter on 3 April 2006, "another high-level source, a former KGB operative in London, has confirmed the story."[17] Among the most serious claims, by Batten's account, is that Prodi assisted in the protection of KGB operatives allegedly involved in the assassination attempt on Pope John Paul II in 1981. The Italian parliamentary commission, the Guzzanti Commission, later concluded that KGB and GRU (Soviet military intelligence) did attempt to assassinate Pope John Paul II. [citation needed]

On 26 April 2006, Batten repeated his call for a parliamentary inquiry, stating that: "Former, senior members of the KGB are willing to testify in such an investigation, under the right conditions... It is not acceptable that this situation is unresolved, given the importance of Russia's relations with the European Union." [citation needed]

On 11 November 2006, Lt Col Litvinenko was admitted to hospital with suspected poisoning after eating at a London restaurant and died on 23 November 2006. The police later concluded he has been poisoned with polonium - even a small dose of it is sufficiently lethal. Anatoly Trofimov was assassinated by unknown gunmen in April 2005. [citation needed]

On 22 January 2007, the BBC and ITV News released documents and video footage, from February 2006, in which Litvinenko made the same allegations against Prodi.[18][19]

Taking on the Bilderberg Group

On 12 September 2011, at the European Parliament in Strasbourg, France, Batten made an extraordinary one-minute speech questioning why the media do not report on the annual Bilderberg meetings of some of the world's most powerful people. Here's a transcription of his speech,[20] also available as a YouTube video[21]:

If Bilderberg meetings are just talking shops, why do the most powerful figures from around the world, including George Osborne, the [British] Chancellor of the Exchequer, bother to attend? What other summit of world leaders in politics, finance and business would go completely unreported in the mainstream media such as the BBC?

It’s impossible not to reach the conclusion that the non-reporting of these events is anything other than a conspiracy between the [Bilderberg] organizers and the media. It merely confirms the belief of many that the hidden agenda and purpose of the Bilderberg Group is to bring about undemocratic world government. It’s a disgrace that the European Commission is colluding in that.”

On May 21, 2011, he, with his wife, was Guest-of-honour and speaker at the annual dinner of the Traditional Britain Group at the Charing Cross Hotel in central London.