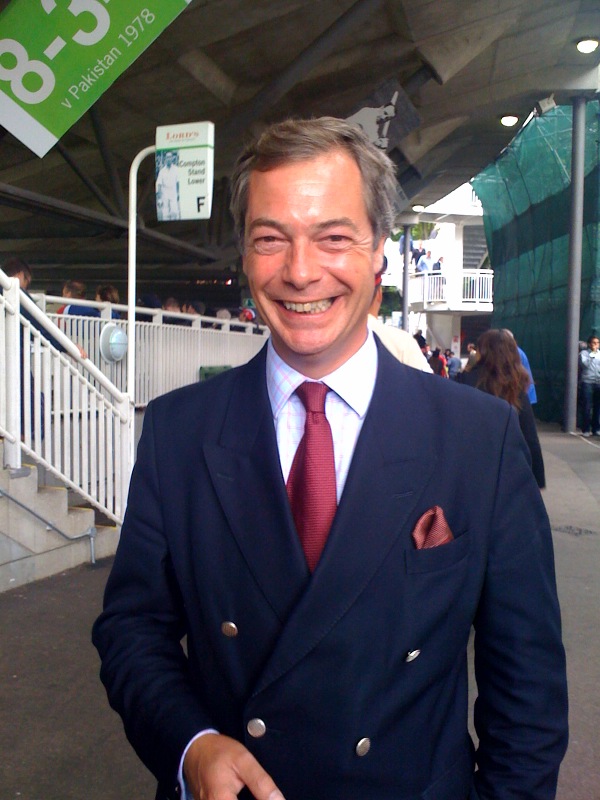 Nigel Paul Farage (born 3 April 1964) is a British political commentator and former politician who served as Leader (2010 till June 2016) of the UK Independence Party (UKIP).[1] He was also party Leader from September 2006 to November 2009. He served as Member of the European Parliament for South East England from 1999 until the United Kingdom's exit from the EU in 2020.

Farage was educated at Dulwich College before joining a commodity brokerage firm in London. He ran his own brokerage business from the early 1990s until 2002. In his early 20s Farage was diagnosed with testicular cancer but made a full recovery.[2]

Farage has also penned his own memoirs, entitled "Fighting Bull." It outlines the founding of UKIP and his personal and political life so far.

Views on the euro

From taking office as a UKIP MEP in 1999, Farage has often voiced opposition to the "euro project". His argument is that "a one size fits all interest rate" cannot work for countries with structurally different economies, often using the example of Greece and Germany to emphasise contrast. He predicted the need for 'bailouts' before European Commission and European Central Bank officials admitted that these steps would be necessary. Specifically, Farage predicted that Greece, Ireland, Portugal and Spain would all require such assistance. To date, Spain is the only predicted country that has not asked for a 'bailout'. Although Spain and Italy have both had indirect assistance from the ECB, whereby secondary government bonds are bought by the central bank, they are prohibited from purchasing new bonds. Farage warns: "You can ignore the markets if you want to, but in time the markets will not ignore you". Farage also reinforces Germany's argument that Italy "should never have joined the euro".

Farage strongly opposes the use of 'bailouts' and claims that "buying your own debt with tax payers money" will not solve the problem and that, "if we do, the next debt crisis won't be a country", "it will be the European Central Bank itself".[4][5]

Part of this article consists of modified text from Wikipedia, and the article is therefore licensed under GFDL.
Retrieved from "http://en.metapedia.org/m/index.php?title=Nigel_Farage&oldid=454345"
Categories: