Eugen Franz Leopold Fischer (sometimes Franz Leopold Eugen; 1874 – 1967) was a German physician, medical doctor of the Imperial German Army as well as the Wehrmacht (at last Generalarzt), anthropologist, hereditary biologist, eugenicist, racial hygienist and from 1927 until his retirement in 1942 the director of the Kaiser Wilhelm Institute of Anthropology, Human Heredity, and Eugenics (Kaiser-Wilhelm-Institut für Anthropologie, menschliche Erblehre und Eugenik) which was the successor of the Kaiser-Wilhelm-Gesellschaft zur Förderung der Wissenschaften. As professor of anthropology he was the first National Socialist Rector of the University of Berlin, also judge at the Hereditary Health Court. 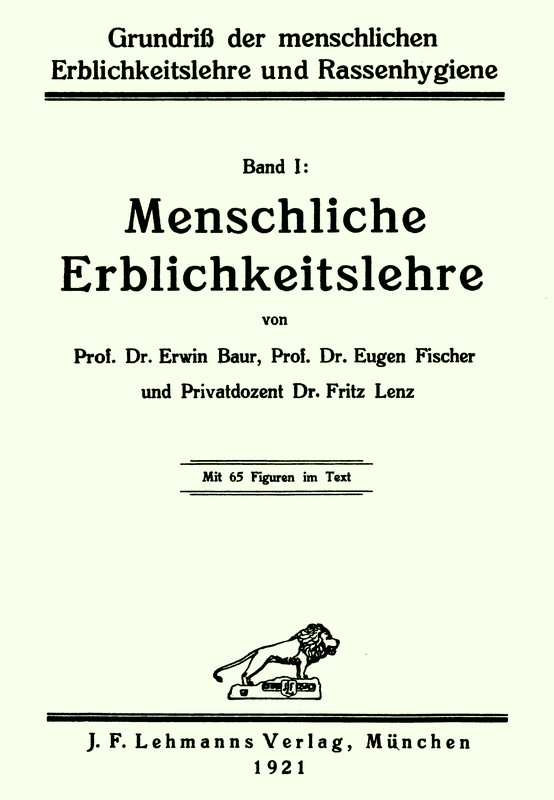 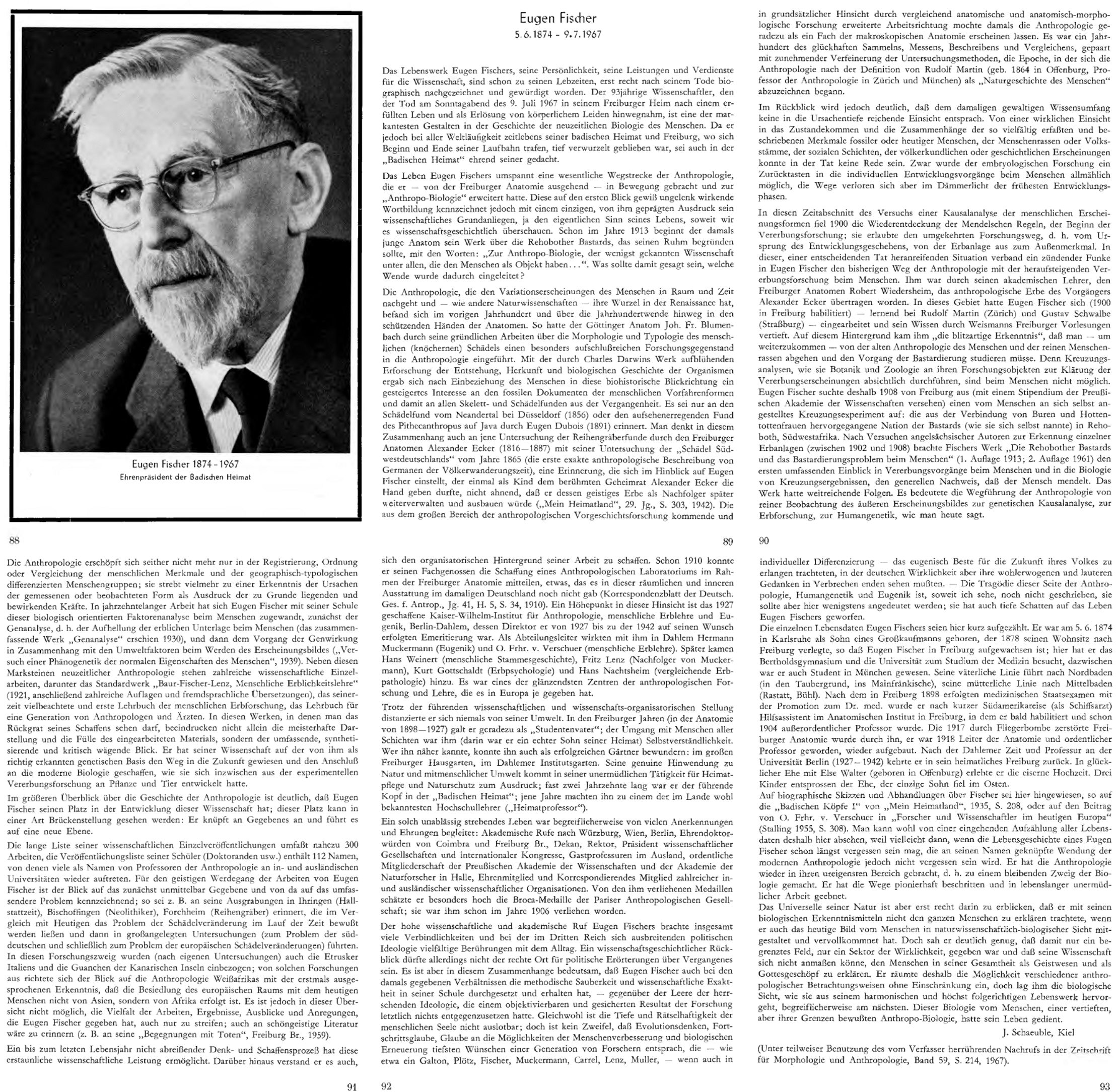 Fischer, the son of a wealthy merchant,[3] founded in 1909, as he returned from Africa, the local group Freiburg of the "German Society for Race Hygiene" (Deutsche Gesellschaft fur Rassenhygiene, founded 1905 by Dr. med. Alfred Ploetz), and specialised in racial anthropometry.

Fischer worked with Charles B. Davenport at the International Federation of Eugenics Organizations. In 1921, he co-authored (together with Erwin Baur and Fritz Lenz) one of the standard works of racial awareness, Grundriß der menschlichen Erblehre und Rassenhygiene (Outline of Genetics and Racial Hygiene) which appeared in English in 1931.

Eugen Fischer grew up in Freiburg im Breisgau, where he also studied and spent most of his career before 1927. He remained personally attached to Freiburg and southwestern Germany for the rest of his life and supported amateur archaeological work about the region. He received his doctorate of medicine in 1898 and his habilitation, in “anatomy with special consideration of anthropology,” in 1900. Despite a slow process of academic promotion, his administrative skills and energetic advocacy of anthropological methods in biomedicine quickly impressed important colleagues. In 1903 he participated in the German Anthropological Society’s survey of the entire population of the German Empire. This brought him into close contact with other major anthropologists, especially Felix von Luschan. Fischer’s interest in eugenics and racial hygiene took concrete form in 1910, when Alfred Julius Ploetz, the founder of the German Society for Racial Hygiene, convinced him to organize the society’s Freiburg branch. The political controversies generated by the German colonies in Africa and the Pacific led to Fischer’s breakthrough as a scientific investigator. Fischer personally supported an active German colonial policy, and sought to become an expert on racial questions in the colonies. He hypothesized that a hybrid European-African population in German Southwest Africa (Namibia) should demonstrate the Mendelian hereditary patterns that had become central to biological inquiry after 1900. Financed by the Prussian Academy of Sciences, he traveled to Africa in July–October 1908. The resulting monograph, Die Rehobother Bastards, appeared in 1913. Fischer constructed elaborate family trees of the Rehoboth population and then classified three sub-populations (“European,” “mixed,” and “Hottentot”) based on traits including hair form, eye color, hair color, skin color, skull shape, eye shape, and nose shape. He also argued that the Rehoboth population showed signs of “hybrid vigor,” despite his expressed belief that African populations showed a lack of creativity and leadership qualities, and were therefore “inferior.” Anthropologists and biologists long accepted that Fischer’s work demonstrated conclusively that human traits were subject to Mendelian laws. In further works of this period, Fischer argued that human racial differences appeared through a process akin to domestication in plants and animals. He believed that Europeans had “auto-domesticated” through quasi-conscious selection for “blondness, light eye color, and light skin,” and he used histological comparisons of pigmentation in brown bears and polar bears to support his arguments against natural selection as the cause of human racial differentiation. [...] In 1918, after wartime medical service, Fischer was made full professor of anatomy and director of the Anatomical Institute in Freiburg. Nonetheless, he still sought a more prestigious position from which to expand his advocacy. In 1927 he was made professor of anthropology and founding director of the new KWIA, in Berlin. At KWIA he administered research and publication work in the three departments indicated by its name, and oversaw what he himself called “eugenic propaganda.” [...] He was made rector of the University of Berlin in 1933. [...] After the war Fischer escaped denazification proceedings with a fine of three hundred marks. He then refrained from publication and scientific activity for some years. After 1950 he revived his work in local archaeology and actively advocated for the careers of his former students and colleagues such as Verschuer. He thus remained until his death a significant participant in the spheres of German anthropology, biology, and genetics. Fischer’s career is far more than just a cautionary tale. It represents the full complexity of the cultural and political embeddedness of the German life sciences in the early twentieth century.[4]

In 1901, Dr. Fischer married his fiancée Else Walter. They had three children, two daughters and one son: