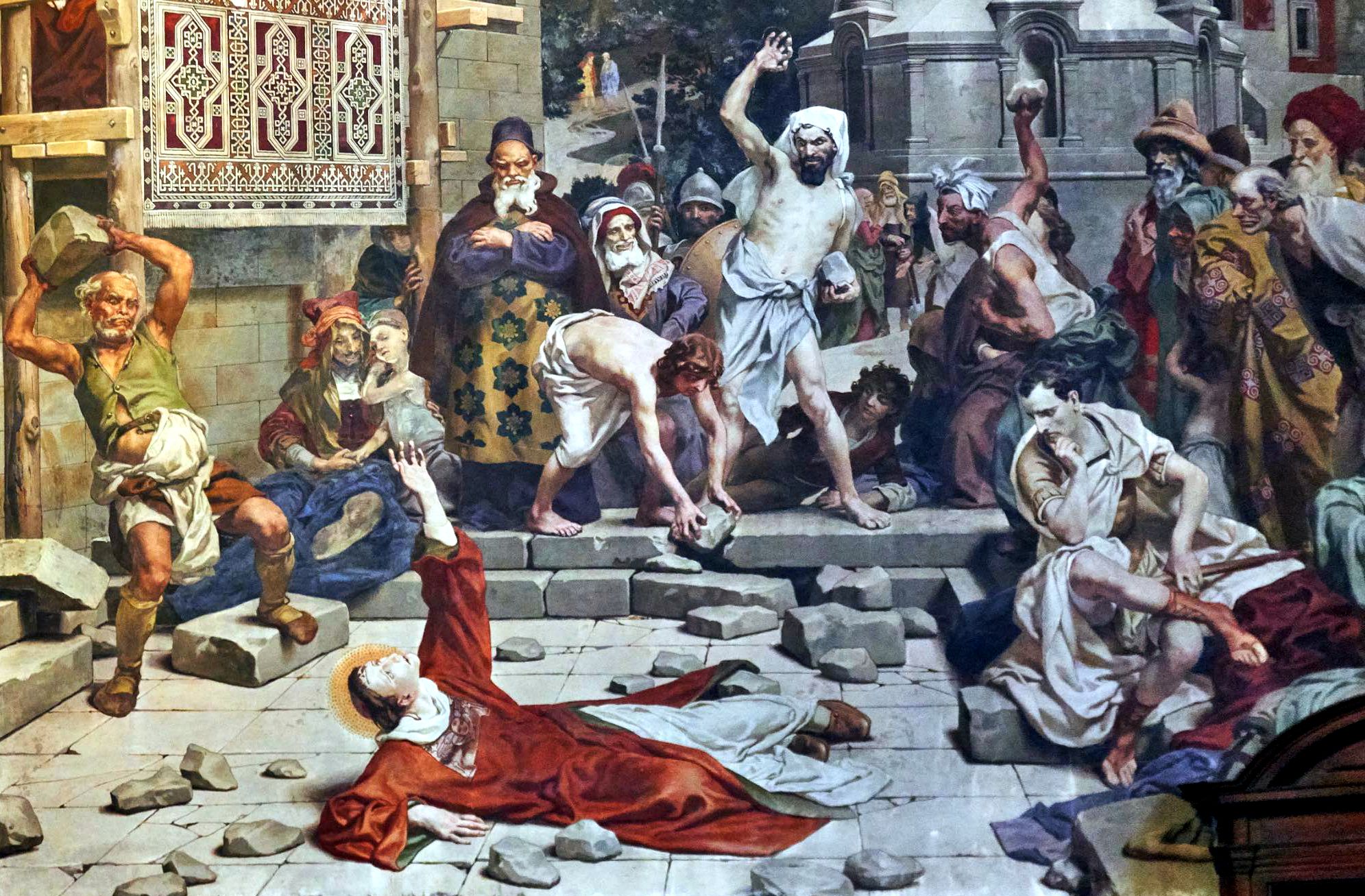 Painting of the stoning of Stephanus (Stephen), the first Blutzeuge of Christianity, in the Basilica of St. Anthony in Padua. Stephen faced two accusations from the Jews: that he had declared that Jesus would destroy the Temple in Jerusalem and that he had changed the customs of Moses. He said that the recently resurrected Jesus was standing by the side of God. The people from the crowd, who threw the first stones, laid their coats down so as to be able to do this, at the feet of a "young man named Saul" (later known as Paul the Apostle). Stephen prayed that the Lord would receive his spirit and his killers be forgiven, sank to his knees, and "fell asleep".[Acts[1] 7:58–60] Saul "approved of their killing him."[Acts 8:1] In the aftermath of Stephen's death, the remaining disciples fled to distant lands, many to Antioch. 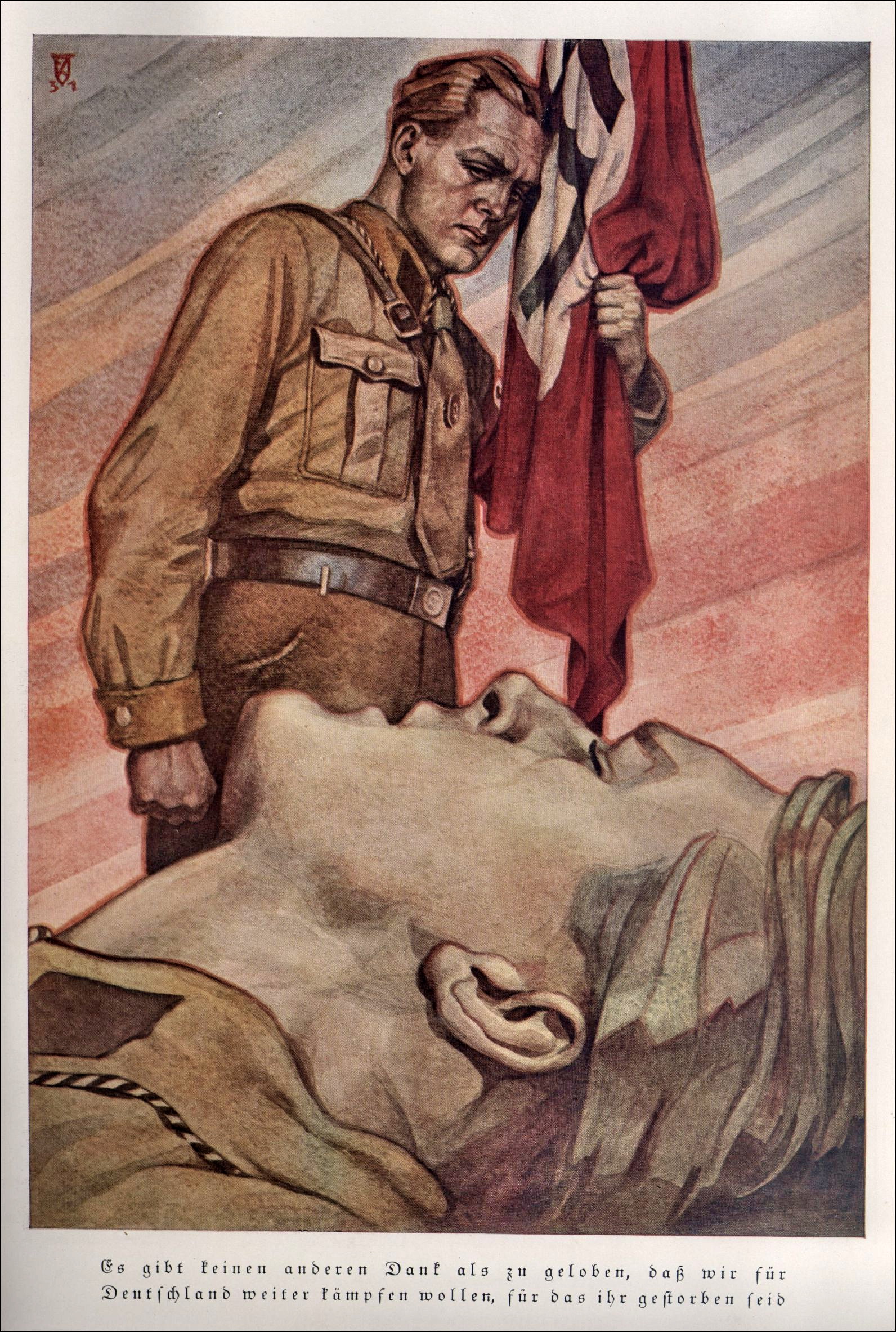 Blutzeuge of the SA; Caption: "There is no other way of thanking you other than to promise that we will continue to fight for Germany, for which you have died".

At the latest, the term has been established since the 17th century in the Holy Roman Empire of the German Nation. It clarifies the difference to so-called confessores (Latin: confessores), who suffered bloodless persecution such as imprisonment and banishment for their Christian avowal. Martyrdom was referred to as "blood baptism" (German: Bluttaufe); it was to replace baptism, if it had not yet taken place, and lead immediately to salvation.

The interpretations of the blood from Christ's wound in the side as well as the apocalyptic speech about washing in the blood of the lamb on martyrdom relate the blood of Christ to the blood of the martyrs in an argument by analogy; because they shed their blood for Christ, their sins are blotted out by Christ's blood. Especially following Tertullian, martyrdom could also be understood as a "bath" that washes the Blutzeugen with their blood. [...] The theological conception of "blood baptism" restricts the obvious thesis that cleansing with blood is ultimately a metaphor of grace. In fact, the possibility of blotting out one's sins through martyrdom gives man a chance to attain eternal salvation on his own, albeit at the cost of his own life. However, it is precisely the imagery that repeatedly links martyrdom with divine grace. The blood of Christ side wound (Jn. 19:34) is related to the blood of the martyrs; the Blutzeugen "wash their clothes in the blood of the Lamb" (Rev. 7:14); even where only their own blood is mentioned, they are often washed or baptized in it, they do not wash themselves.[2]

At the suggestion of Pope John Paul II, from 1995 onwards, the Roman Catholic Church had documentation made about Christian martyrs of the 20th century in several countries in order not to let their testimonies fall into oblivion.

The glory and victory of Christianity and its rapid spread gave a rise to fear and envy among the Jewish leaders. They began to pursue the Christians, to arouse the simple Jewish people against them and to accuse them to the Roman authorities. The Jews seized Christians, threw them into prisons, and killed them. The first one to suffer at the hands of the Jews in Jerusalem was St. Stephen, one of the first deacons. He is called the first martyr since he was the first among all tortured for Christ. For preaching about the Saviour, the Jews cast him outside the city and began to stone him to death. He prayed saying, "Lord Jesus, receive my spirit," and then with the words, "Lord, do not hold this sin against them," he died. By killing St. Stephen and many others of the faithful, the Jews were still not able to weaken faith in Christ. On the contrary, by doing this, they greatly kindled its spread among the inhabitants of Jerusalem. Because of the persecution, Christians dispersed into Judea, Samaria, and other countries; and everywhere they went, they preached about the Lord Saviour and His teaching. No power in the world could stop the victorious spread of Christianity, for faith in Christ is the true faith. The teaching of Christ is divine teaching, and life according to the faith and teaching of Christ is a true holy life, the Kingdom of God. The Heavenly Father strengthened the faithful, the Saviour was with them, and they were comforted by the Holy Spirit, the Comforter.[3]

Islam knows the term Shahīd. It is derived from the word root šahada 'to witness', 'to bear witness', 'to testify' and has the same basic meaning 'witness', 'blood witness' as the Greek word from which the term martyr is derived. The martyr's body must not be washed and is buried with his clothes and blood.

During the National Socialist period, the word "Blutzeuge" was also used to describe various people who died violently in connection with the struggle of the National Socialist movement for self-assertion and power in the German Reich (Kampfzeit) or in connection with the securing of this power ("Bloodwitnesses of the Movement"). In this meaning, the term was referred in particular to 16 participants of the March to the Feldherrnhalle in November 1923, who were killed during the confrontation with police and Reichswehr. The official list of the "Blutzeugen der Bewegung" contains a total of 440 names. In addition, there were a large number of other victims who are not mentioned on the official list or who have now been completely forgotten. Those who survived would later receive the "Blood Order".

On the other hand, German Churches in the FRG describe the "martyrs of the Archdioceses", for example Archdiocese of Munich and Freising,[4] who died or were killed in National Socialist Germany, also officially as "Blutzeugen". Victims of "godless communism" are also often titled "Blutzeugen" in German literature.