From Metapedia
(Redirected from Benjamin Freedman)
Jump to: navigation, search 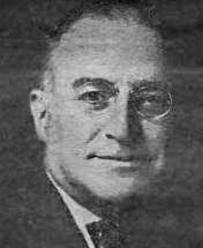 Benjamin Harrison [1] Freedman, (October 4, 1890 - May 1984)[2] was an American businessman, a convert from Judaism to Catholicism, an anti-Zionist, and critic of Jewish influence.

Freedman was born Oct 4, 1890 in New York City.[3] Freedman claimed that he was present at the 1912 presidential campaign as an assistant to Bernard Baruch, and regularly sat at meetings with candidate Woodrow Wilson. He claimed in a speech that he was a liaison between Rolla Wells and Henry Morgenthau, Sr. This could only have been with the Democratic National Committee sometime between 1912 and 1916, as in that year Rolla Wells was appointed a Governor of the Federal Reserve Bank in St. Louis. His World War I draft registration card states that he was living at 340 West 86th in New York.[4] A few houses away, at 309 lived Samuel D. Leidesdorf. The 1925 New York City directory lists "Benj H Freedman (Freedman-Salisbury Co) h340 W86th"[5] Also living at the same address is "Mrs Moritz Freedman", his widowed mother. His partner in this company is listed as "Milton S Salisbury imprs 233 Bway R2156".

He was at one time a partner with Samuel D. Leidesdorf in John H. Woodbury and the John H. Woodbury Laboratories, a dermatological institute [6] and a derivative company of the old Woodbury Soap Company. He states that he was in that business from "I would say 1925 to 1937 or 1938." [7] In 1931, "Benj H Freedman" is listed in the city directory as living at the Paramount Hotel[8] Benjamin H Freedman was listed on the letterhead of the Institute for Arab American Affairs and around 1946, along with his wife, listed as "R M Schoendorf", "sponsored a series of advertisements under the imprint of 'The League for Peace with Justice in Palestine'".[9] In 1946 he sued the American Jewish Committee for $5,000,000 for libel.[10] In 1948, he, through Hallam Richardson, attorney for the League for Peace With Justice in Palestine sued the Non-Sectarian Anti-Nazi League (founded by Samuel Untermyer) for criminal libel, that they had libeled Mr Richardson in a pamphlet by saying he had "long been known in the halls of pro-Fascist propaganda." The case was heard before Hyman Bushel in Mid-Manhattan Court for 23 days and then dismissed.[11]

In 1954, his address is stated to be 960 Park Avenue. He contributed money to Conde McGinley, publisher of the periodical Common Sense.[12] In 1955, Rabbi Joachim Prinz (1902–88) (later President of the American Jewish Congress), sued McGinley for branding him a "red rabbi", and Freedman was called as a witness.[13] He also produced several pamphlets over the years. The New York Times reported a meeting at the Henry George School where Benjamin H. Freedman spoke on "The Genesis of Middle East Tensions".[14] And again they reported that "Long John Nebel" on WNBC "will discuss anti-Semitism with Benjamin H. Freedman, industrialist."[15] He continued his political activities until the mid-1970s, when he was well over 85 years old. Benjamin Freedman died in May 1984 at the age of 94. [16] His wife was named Rose.[17][18]

Freedman as a revisionist

The Casus Belli for the American Entry into WWI

In The Hidden Tyranny Freedman explained the American entry into the war thus: “Congress only declared war against Germany because President Wilson informed Congress that a German submarine had sunk the S.S. Sussex in the English Channel in violation of international law and that United States citizens aboard the S.S. Sussex had perished with the ship.” (This claim can be compared with the text of Wilson’s message to Congress of April 2, 1917 here.)

The alleged plot against Germany

He claimed a conspiracy among powerful Zionists in the banking and financial elite to undermine Germany during World War I. He also claimed that a group of Zionists offered to embroil the United States in World War I on the Allied side in return for British support for a Jewish Homeland in Palestine. He claimed support was offered in the form of the Balfour Declaration issued by the British Government to the head of the British Jewish Community Lord Rothschild. He claimed that he was there and "ought to know".

Claims of Jewish control of newspapers

Freedman also claimed that the prominent lawyer Samuel Untermyer visited President Wilson in the White House and threatened him with a breach of promise suit on behalf of the wife of a Princeton professor with whom Freedman alleged Wilson had carried on an affair and to whom he offered marriage. Untermeyer's client wanted $40,000, which Wilson did not have. Untermeyer offered to pay his client off if Wilson would allow Untermeyer to dictate the next available Supreme Court nomination, which in the event went to Louis Brandeis. For an account of the law involved here, see breach of promise. For a detailed and documented account of Wilson's close relations with Brandeis and his desire to have him as his first Attorney-General, see the first two volumes of Arthur S. Link's Wilson.

Benjamin Freedman contributed funds toward the once-well-known newspaper Common Sense, published by Conde McGinley. In an article in the February 1955 issue of Commentary magazine, he is cited as a financial backer of Conde McGinley, publisher of the periodical Common Sense. In the libel trial by Rabbi Joachim Prinz against McGinley, Freedman as a witness testified that "he had given Mr. McGinley financial support of 'more than $10,000 but less than $100,000'".[22]

League for Peace With Justice in Palestine

After the demise of Common Sense, Benjamin Freedman continued to write and publish his own broadsheets under the aegis of the League for Peace With Justice in Palestine, which he had founded in 1946.[23] [24][25]

This is a pamphlet purporting to be the text of a 1954 letter from Freedman to David Goldstein, a Jewish convert to Catholicism and an exponent of the idea that Christianity fulfilled Judaism. The text expounds the notion that most people now identified as Jews are the descendants of Khazars, a Turkic people of Central Asia who converted to Judaism. Throughout the text of this pamphlet, the author never refers to "Jews" simpliciter. He always refers to "so-called or self-styled 'Jews.'" In it can also be found a criticism of the Kol Nidre. Freedman considered it as a complete assumed deloyalty.

Part of this article consists of modified text from Wikipedia, and the article is therefore licensed under GFDL.
Retrieved from "http://en.metapedia.org/m/index.php?title=Benjamin_H._Freedman&oldid=468098"
Categories: