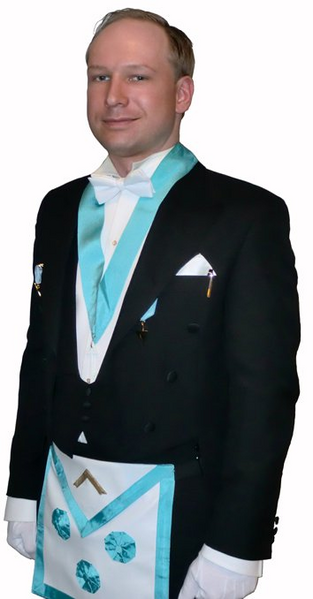 Two different psychiatric evaluations reached different conclusions on whether Breivik was legally sane enough to be found guilty. Both stated that he had various mental disorders. The court (under immense pressure) decided to declare him legally sane and sentenced him to imprisonment.

Breivik has stated various widely different associations, motives, and views, which have changed over time and which in some cases have been found to be delusions/lies, and which may be dubiously described, for reason such as his mental disorders, attempts to gain publicity, and attempts by mass media to use him for guilt by association with a wide range of politically incorrect views.

In prison, Breivik has been stated to more recently have identified himself as a fascist and a "Nazi", which has been criticized due to his general incoherence and Breivik seemingly thinking that an ethnic nationalist and a "Nazi" is the same thing. The counterjihad blogger Fjordman has written that "So in Breivik’s mind, the clever way to strengthen nationalists is to murder children from their (and his) own nation and ethnic group. Is he crazy? Yes, that’s probably exactly what he is. Nuts. Clinically insane. My impression when reading this letter was not that Breivik is a Nazi. He's too incoherent to be taken seriously even as a neo-Nazi. My impression was that he is not receiving the anti-psychotic medications he so clearly needs. ABB first claimed that he was an anti-Nazi terrorist. Now, he’s suddenly a peaceful Nazi who wants non-violent "dialogue" with the media. Next month, he’ll be a smurf. The month after that, he may proclaim that he’s Kermit the Frog from The Muppet Show. He will say this partly because life in prison is boring and he craves personal attention, and partly because he might actually believe it. Perhaps he will design a new uniform for Commander Kermit of the Knights Templar?"[1]

An often not mentioned aspect is the reactions of some Israelis to the crimes and Breivik's early claim to be a Zionist. "There are even hints that some Israelis sympathize with Breivik. Wrote J.J. Goldberg in The Forward on Monday, “Judging by the comments sections on the main Hebrew websites, the main questions under debate seem to be whether Norwegians deserve any sympathy from Israelis given the country’s pro-Palestinian policies, whether the killer deserves any sympathy given his self-declared intention of fighting Islamic extremism and, perhaps ironically, whether calling attention to this debate is in itself an anti-Israel or anti-Semitic act.”"[2]