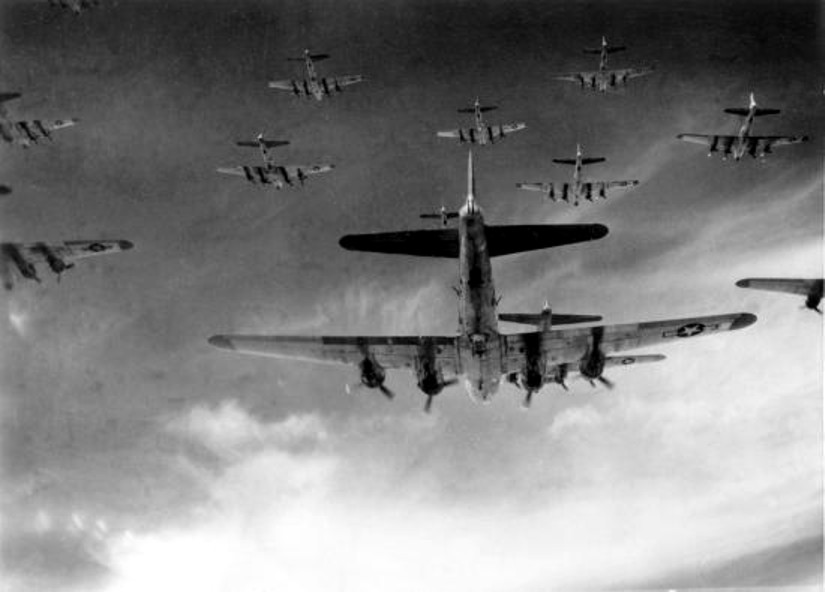 German view of their "Liberation" in the closing months of WWII showing USAAF fighters straffing civilians.

During World War II the USAAF brought thousands of its heavy bombers and accompanying fighter planes to Europe, which was no threat whatsoever to the USA, and indiscriminately bombed towns and cities across Europe, from neutral France (including Nimes, with its magnificent, intact, Roman buildings and viaducts), and Italy, to the Baltic, bringing deliberate death and destruction to hundreds of thousands of non-combatants and destroying a millennia of Europe's architectural heritage. In 1944 the USAAF bombed Bratislava, despite Slovakia being a neutral state.

Other examples include Halberstadt, a town in Saxony-Anhalt, Germany; and Swinemunde which was virtually demolished by them in March 1945 with huge loss of life, and Dresden, which had already been horrifically bombed and wrecked by the RAF, was a USAAF exercise in blowing up rubble and murdering those attempting to help the survivors of the RAF's previous night.

In 1944-45 they proceeded to regularly bomb the largely untouched magnificence of Vienna, causing major damage including hitting St Stephen's Cathedral (consecrated in 1147) and the auditorium of the Vienna State Opera. At the very end of the war they even bombed Bayreuth a country town whose only claim to fame was its theatre and other architectural monuments.[1] Their fighter planes strafed defenceless civilians and others mercilessly including women and children.

Their activities had little known effect, either then or now, on the outcome of the war and must be viewed as wanton murder. The Americans' being in Europe, and raining death and destruction upon its peoples, was widely condemned by many[2], including the famous Swedish explorer, Sven Hedin, in his book: Amerika im Kampf der Kontinente.