Swinemunde is a German town and seaport on the Baltic Sea and Stettin Lagoon, situated on several islands, but mainly that of Usedom. It lies one and a half miles above the mouth of the river Swine. In 1904 it had a population of 10,300.[1] Swinemunde has been under Polish occupation since the end of World War II, its original population murdered and expelled by the Soviet and Polish communists, and replaced by Polish settlers.

The town was founded in 1740; fortifications were erected at the mouth of the river Swine, where two massive breakwaters were subsequently constructed, three-quarters of a mile to a mile in length, forming the entrance to the harbour.[2] The Kaiserfahrt canal, constructed during the reign of Kaiser Wilhelm II in the late 19th century, facilitated ship access from Swinemunde to Stettin. Before World War II, in the Rathaus-Platz (Town Hall Place), stood a magnificent 1893 bronze statue of the Kaiser Wilhelm I by the sculptor Alexander Emil Calandelli. Swinemunde became a fashionable sea-bathing place, attracting thousands of visitors annually to its sandy beaches about one mile north of the town.[3] 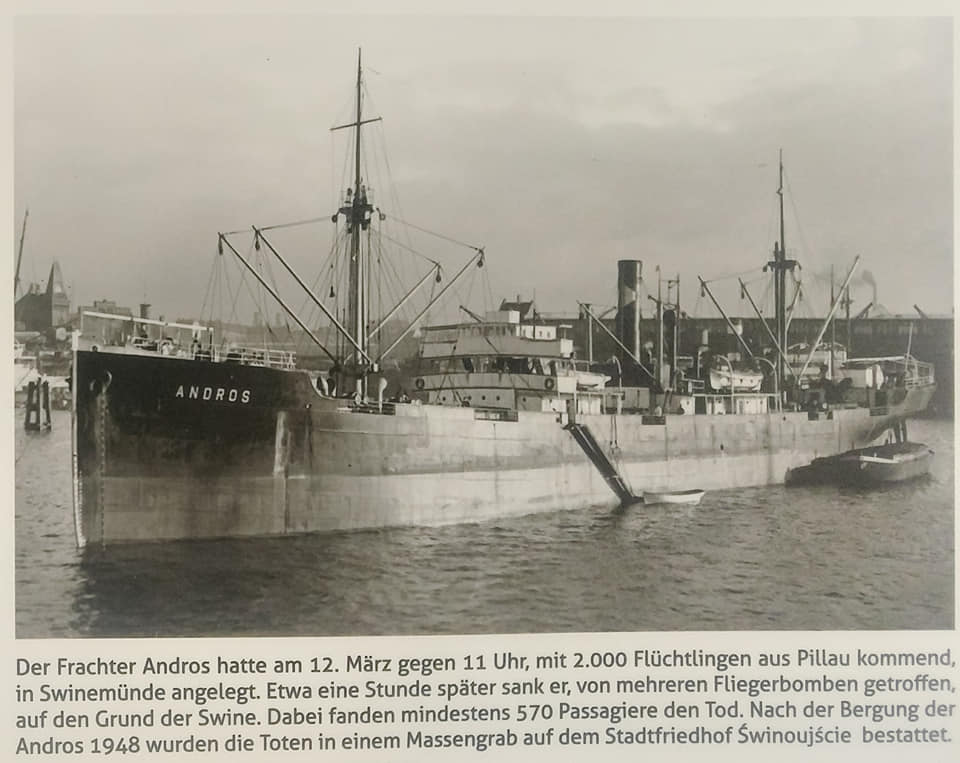 SS Andros with 2000 refugees was bombed while anchored.

On Friday, March 12/13, 1945, Swinemünde, filled to bursting with frantic, half-starved, and exhausted refugees from East Prussia and Pomerania fleeing the advancing Soviet Red Army, was completely destroyed in a daylight bombing attack carried out by 660 United States Army Air Forces B-17 and B-24 heavy bombers.

While the combat log of the USA's 8th Air Force states that the target was the railroad marshalling yards on the periphery of the city, in reality the entire bomb load of over 1,800 tons of high explosive was dropped on the compact ancient center of Swinemünde and refugee ships in the harbour including the Andros which had just arrived from Pillau with over 2000 refugees, 570 of whom were murdered by the bombs.

All told approximately 23,000 people died in the raid, the vast majority of the victims women and children. In his book "Der Brand", German Historian Jörg Friedrich claims that for the bombing of Swinemünde many of the bombs had been fitted with very sensitive fuses in order to cause maximum blast and thus maximum casualties among the fugitives. To this day, survivors of the attack still speak of the attack as the "Massacre at Swinemünde".[4]