The Mismeasure of Man 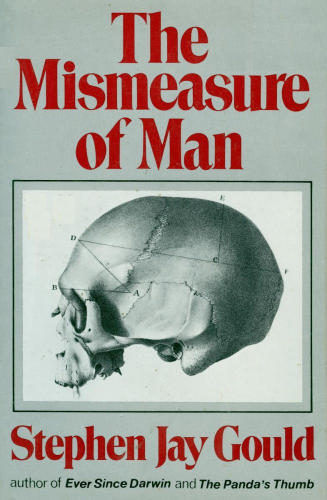 The Mismeasure of Man is a race denialist and race and intelligence denialist popular science book by the Jewish Stephen Jay Gould. It was first published in 1981, with a revised second edition in 1996, as one of the many attacks on The Bell Curve (1994). The book has been highly influential among the general public, but has been heavily criticized for miscalculation, misrepresentation, intellectual errors, propaganda, and of other problems.

The book was widely praised among the politically correct.

The first edition of The Mismeasure of Man won the non-fiction award from the National Book Critics Circle; the Outstanding Book Award for 1983 from the American Educational Research Association; the Italian translation was awarded the Iglesias prize in 1991; and in 1998, the Modern Library ranked it as the 24th-best non-fiction book of all time.[1] In December 2006, Discover magazine ranked The Mismeasure of Man as the 17th-greatest science book of all time.[2]

Another response to The Bell Cuve was the also Jewish Jared Diamond's Guns, Germs, and Steel (1997). Both books denied genetically caused racial IQ differences, both became international bestsellers among the general public, and both were translated into numerous languages. Their impacts on the academic debate among IQ researchers were much smaller.

Gould was an expert on paleontology (a science dealing with the life of past geological periods as known from fossil remains), but was not an expert on race or IQ.

He often claimed that scientific results that he disliked were due to political bias, but he was himself a member of the socialist "Science for the People" organization, which argued that science should be used to advocate for and advance (far) leftist views. 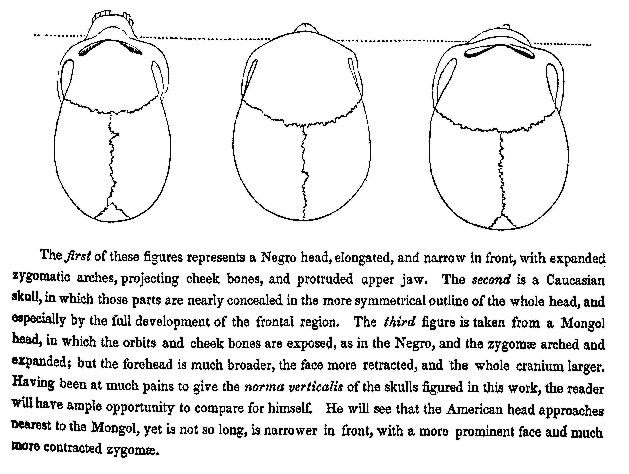 One criticism in the book was regarding the early nineteenth century researcher Samuel George Morton (1799 – 1851). Gould claimed that Morton, possibly due to unconscious bias, had misreported average racial cranial capacities on a particular set of skulls. However, a 2011 study made new measurements of the skulls used by Morton and analyzed Morton's and Gould's claims. The study stated that Morton had not misreported the results. On the other hand, Gould had done several remarkable errors.[6][7] After this, several other studies on this set of skulls and the history of measuring it have been published.

For example, a 2015 study argued that Morton's set of skulls is too unreliable to make any population conclusions.[7]

Leftist Wikipedia has a misleading presentation of the debate on this, implying that Gould has been vindicated and that his arguments were unproblematic, which is incorrect, with, for example, the 2015 study criticizing both Gould and the 2011 study. 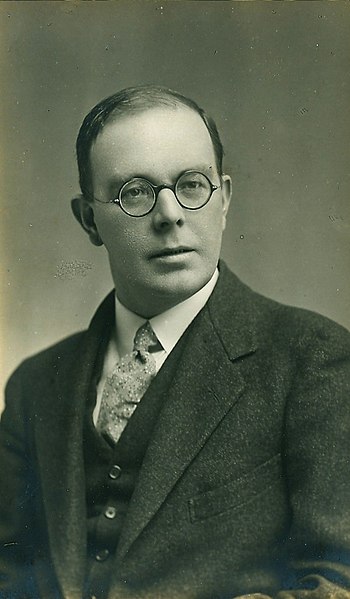 Gould cited the so-called "Burt Affair", about the allegedly fraudulent twin studies by Cyril Burt (1883–1971), wherein Burt stated that human intelligence is highly heritable. That Burt committed fraud has been doubted by later examinations of the reserach. Furthermore, many studies have confirmed that Burt's high heritability estimate was correct, see for example the heritability estimate in the review Intelligence: Knowns and Unknowns.

Studies from the beginning of the 20th century have sometimes been cited as contradicting high IQ among Ashkenazi Jews. A 2006 paper stated that this is "a widely cited misrepresentation by Leon Kamin (Kamin, 1974) of a paper by Henry Goddard (Goddard, 1917). Goddard gave IQ tests to people suspected of being retarded, and he found that the tests identified retarded Jews as well as retarded people of other groups. Kamin reported, instead, that Jews had low IQs, and this erroneous report was picked up by many authors including Stephen Jay Gould, who used it as evidence of the unreliability of IQ tests (Seligman, 1992)."[8] Both Kamin and Gould were Jews. Also other Jews have considered the issue sensitive. Richard Herrnstein, one of the authors of The Bell Curve, wanted to exclude the paragraphs on Jewish IQ.[9]

In his review, psychologist Franz Samelson wrote that Gould was wrong in asserting that the psychometric results of the intelligence tests administered to soldier-recruits by the U.S. Army contributed to the legislation of the Immigration Restriction Act of 1924.[10] In their study of the Congressional Record and committee hearings related to the Immigration Act, Mark Snyderman and Richard J. Herrnstein reported that "the [intelligence] testing community did not generally view its findings as favoring restrictive immigration policies like those in the 1924 Act, and Congress took virtually no notice of intelligence testing."[11]

Psychologist John B. Carroll, "an expert on the statistical method of factor analysis, is a leading psychologist critical of Gould. In a 1995 article in the journal Intelligence, Prof. Carroll begins by noting that The Mismeasure of Man has been “much discussed among intellectual dilettantes,” but is full of errors. He writes that Gould’s “account of the history of mental testing may be regarded as badly biased and crafted in such a way as to prejudice the general public and even some scientists against almost any research concentrating on human abilities.” He also writes of Gould’s “gross misrepresentation of Thurstone’s views and methods of thinking” on factor analysis and the nature of intelligence, and of his “many errors in interpreting factor analysis.”"[12][13]

Statistician David J. Bartholomew, of the London School of Economics, said that Dr. Gould erred in his use of factor analysis, irrelevantly concentrated upon the fallacy of reification (the abstract as concrete thing), and ignored the contemporary scientific consensus about the existence of the psychometric g.[14][15]

Reviewing the book, Stephen F. Blinkhorn, a senior lecturer in psychology at the University of Hertfordshire, wrote that The Mismeasure of Man was "a masterpiece of propaganda" that selectively juxtaposed data to further a political agenda.[16]

Psychologist Lloyd Humphreys, then editor-in-chief of The American Journal of Psychology and Psychological Bulletin, wrote that The Mismeasure of Man was "science fiction" and "political propaganda", and that Gould had misrepresented the views of Alfred Binet, Godfrey Thomson, and Lewis Terman.[17]

In a review of The Mismeasure of Man, Bernard Davis, professor of microbiology at Harvard Medical School, said that Gould erected a straw man argument based upon incorrectly defined key terms — specifically reification — which Gould furthered with a "highly selective" presentation of statistical data, all motivated more by politics than by science.[18] That Philip Morrison’s laudatory book review of The Mismeasure of Man in Scientific American, was written and published because the editors of the journal had "long seen the study of the genetics of intelligence as a threat to social justice." Davis also criticized the popular-press and the literary-journal book reviews of The Mismeasure of Man as generally approbatory; whereas, most scientific-journal book reviews were generally critical.[3]

Gould argued that one problem with the research was that "correlation is not evidence for causation" (a straw man argument, obviously researchers had not ignored such a basic things earlier). Another criticism was that the "heritability" figures does not prove a genetic causation (another straw man, it had only been argued that the high heritability number makes a genetic causation the more probably alternative). Still another argument is that people have particular strengths and weaknesses in particular areas and that the "g factor" does not exist (still another straw man, the results from these areas correlate highly with one another).

Responses by subjects of the book 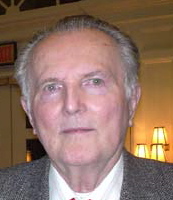 In his review of The Mismeasure of Man, Arthur Jensen, a University of California (Berkeley) professor and educational psychologist whom Gould much criticized in the book, wrote that Gould used straw man arguments to advance his opinions, misrepresented other scientists, and propounded a political agenda. According to Jensen, the book was "a patent example" of the bias that political ideology imposes upon science — the very thing that Gould sought to portray in the book. Jensen also criticized Gould for concentrating on long-disproven arguments (noting that 71% of the book's references preceded 1950), rather than addressing "anything currently regarded as important by scientists in the relevant fields", suggesting that drawing conclusions from early human intelligence research is like condemning the contemporary automobile industry based upon the mechanical performance of the Ford Model T.[19]

Charles Murray, co-author of The Bell Curve (1994), said that his views about the distribution of IQ, among the races and the ethnic groups who compose the U.S. population, were misrepresented in The Mismeasure of Man.[20]

Psychologist Hans Eysenck wrote that "S. J. Gould’s Mismeasure of Man is a paleontologist’s distorted view of what psychologists think, untutored in even the most elementary facts of the science. Gould is one of a number of politically motivated scientists who have consistently misled the public about what psychologists are doing in the field of intelligence, what they have discovered and what conclusions they have come to. Gould simply refuses to mention unquestionable facts that do not fit into his politically correct version; he shamelessly attacks the reputations of eminent scientists of whom he disapproves, on completely nonfactual grounds, and he misrepresents the views of scientists."[21][12]

Responses to the second edition (1996)

Arthur Jensen and Bernard Davis had argued that even if g was replaced by a model with several intelligences this would change the situation less than expected. All tests of cognitive ability would continue to be highly correlated with one another and there would still be a Black-White gap on cognitive tests.[19]

James R. Flynn, an intelligence researcher known for his criticisms of racial theories of intelligence, repeated this after the second edition: "Gould's book evades all of [Arthur] Jensen's best arguments for a genetic component in the black-white IQ gap by positing that they are dependent on the concept of g as a general intelligence factor. Therefore, Gould believes that if he can discredit g no more need be said. This is manifestly false. Jensen's arguments would bite no matter whether blacks suffered from a score deficit on one or 10 or 100 factors." (Flynn at the same time claimed that the Flynn effect was an argument against race and intelligence differences. Regarding this, see the article on the Flynn effect.)[22]

Psychologist J. Philippe Rushton accused Stephen J. Gould of "scholarly malfeasance" for misrepresenting and for ignoring contemporary scientific research pertinent to the subject of his book, and for attacking dead hypotheses and methods of research. He faulted The Mismeasure of Man because it did not mention the magnetic resonance imaging (MRI) studies that showed the existence of statistical correlations among brain-size, IQ, and the g factor, despite Rushton having sent copies of the MRI studies to Gould. Rushton further criticized the book for the absence of the results of five studies of twins reared corroborating the findings of Cyril Burt — the contemporary average was 0.75 compared to the average of 0.77 reported by Burt.[23]

According to psychologist Ian Deary, Gould's claim that there is no relation between brain size and IQ is outdated. Furthermore, he reported that Gould refused to correct this in new editions of the book, even though newly available data were brought to his attention by several researchers.[24]