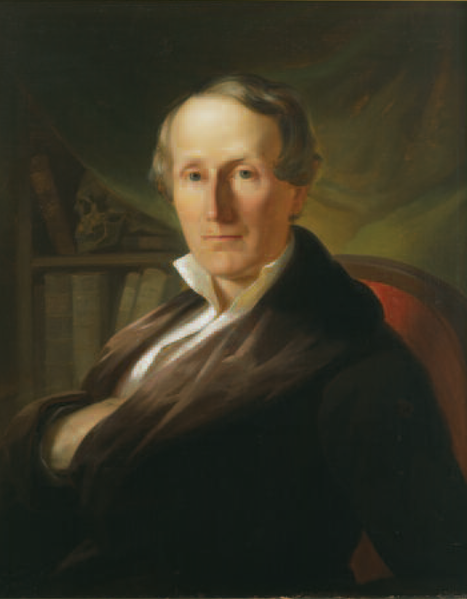 Samuel George Morton (1799 – 1851) was an American physician, natural scientist, and a professor of anatomy. Morton was a productive writer of books on various subjects.

However, he is today most known for his views on race. Morton argued against the single creation story of the Bible (monogenism) and instead supported a theory of multiple racial creations (polygenism). Morton claimed the Bible supported polygenism, and within working in a biblical framework, his theory held that each race had been created separately and each was given specific, irrevocable characteristics.

This was cited by some supporters of racial separation and slavery, causing Morton to later be described as the "father of scientific racism", despite that Morton's theorizing was not scientific and despite that racism and slavery had existed long before this.

Morton collected a set of skulls from different parts of the world and made measurements, published in three volumes between 1839 and 1849: the Crania Americana, An Inquiry into the Distinctive Characteristics of the Aboriginal Race of America and Crania Aegyptiaca.

The measuring of this set of skulls has more recently caused controversy. See The Mismeasure of Man: Samuel George Morton.

Part of this article consists of modified text from Wikipedia, and the article is therefore licensed under GFDL.
Retrieved from "http://en.metapedia.org/m/index.php?title=Samuel_George_Morton&oldid=453349"
Categories: