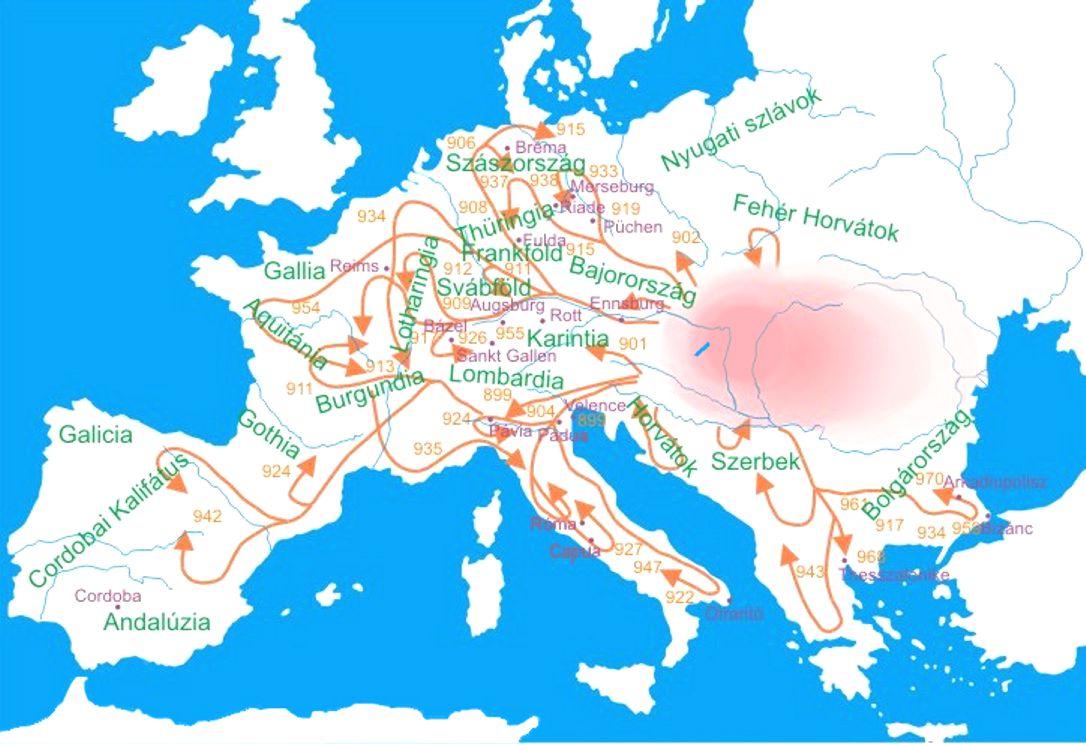 Raids of the Magyars in the 9th and 10th century

Magyars (German: Magyaren) were a pagan Finno-Ugric tribe sometimes historically equated with the ethnic Hungarian people. The descendants of the Magyars were the second-largest language group in the Habsburg Monarchy after the German speakers and were the dominant nation state within the Kingdom of Hungary. 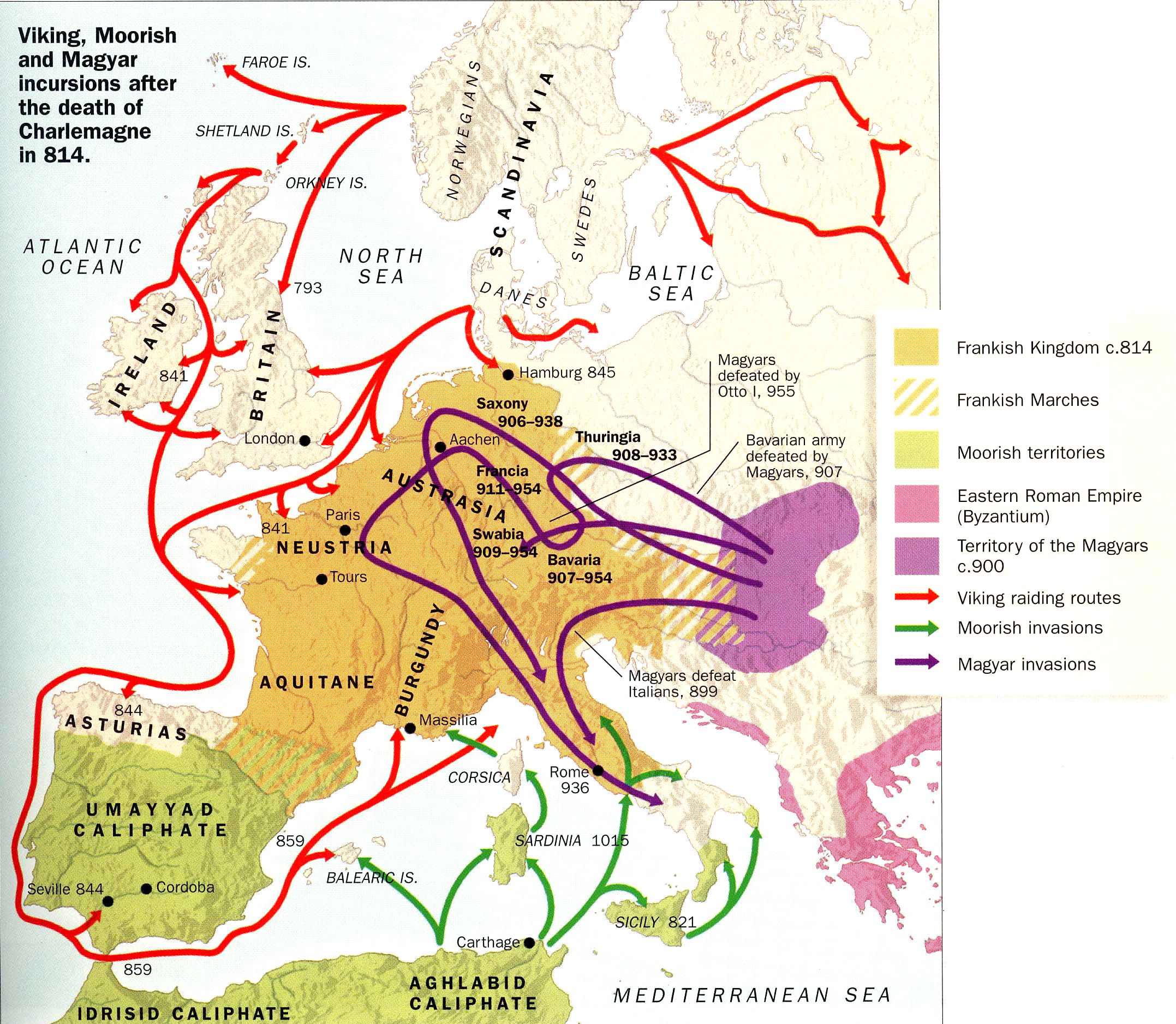 Hungarian, also called Magyar, member of a people speaking the Hungarian language of the Finno-Ugric family and living primarily in Hungary, but represented also by large minority populations in Romania, Croatia, Vojvodina (Yugoslavia), Slovakia, and Ukraine. Those in Romania, living mostly in the area of the former Magyar Autonomous Region (the modern districts [judete] of Covasna, Harghita, and Mureş), are called Szeklers. The proto-Hungarians were apparently an ethnic blend of Ugric and Turkish peoples living in western Siberia. By the early 5th century ad they had migrated southwestward and were roaming over the Khazar Turkish empire, centred near the Caspian Sea. By ad 830, however, they were appearing on the west banks of the Don River and, as a body, consisted of seven tribes, who had been joined by three dissident tribes of Khazars known as Kavars. By the late 9th century the Hungarians had entered their present location, subjugating the resident Slavs and Huns there. Until they were checked a half century later, the Hungarians were the scourge of Europe, raiding as far afield as Bremen, Orléans, and Constantinople (the English word ogre, a corruption of “Hungar,” attests to their notoriety).[1]

The first supposed reference to the Magyars in war is in the 9th century. Muslim geographers recorded that the Magyars regularly attacked the neighboring East Slavic tribes, and took captives to sell to the Byzantine Empire at Kerch. There is some information about Hungarian raids (German: Ungarneinfälle or Ungarnstürme) into the eastern Carolingian Empire in 862.

The Magyars are said to have defeated three Frankish imperial armies of the Holy Roman Empire between 907 and 910. In 907 they defeated the invading Bavarians near Brezalauspurc, laying parts of Germania open to Magyar raids. On 3 August 908 the Hungarians won the Battle of Eisenach, Thuringia. Egino, Duke of Thuringia was killed, along with Burchard, Duke of Thuringia and Rudolf I, Bishop of Würzburg. The Magyars defeated Louis the Child's united Frankish Imperial Army at the first Battle of Lechfeld in 910. Smaller units penetrated as far as Bremen (later a member of the Hanseatic League) in 915. In 919, after the death of Conrad I of Germany, the Magyars raided Saxony, Lotharingia and West Francia. Between 917 and 925, the Magyars raided through Basel, Alsace, Burgundy, Provence and the Pyrenees. In 926, they ravaged Swabia and Alsace, campaigned through present-day Luxembourg and reached as far as the Atlantic Ocean.

In 933, a substantial Magyar army appeared in Saxony (the pact with the Saxons having expired) but was defeated by Henry the Fowler (Heinrich I.) at Merseburg. Magyar attacks continued against Upper Burgundy (in 935) and against Saxony (in 936). In 937, they raided Frankia as far west as Reims, Lotharingia, Swabia, Franconia, the Duchy of Burgundy and Italy as far as Otranto in the south. They attacked Bulgaria and the Byzantine Empire, reaching the walls of Constantinople. The Byzantines paid them a “tax” for 15 years. In 938, the Magyars repeatedly attacked Saxony. In 940, they ravaged the region of Rome. In 942, Hungarian raids on Spain, particularly in Catalonia, took place, according to Ibn Hayyan's work. The Battle of Lechfeld in 955 (Schlacht auf dem Lechfeld) south of Augsburg (Bavaria), in which the Germans (although German losses were heavy, especially losing Konrad Herzog in Lothringen[2]), led by King Otto I the Great, annihilated the Magyars (losing the majority of their 8,000–10,000 horse archers and infantry), finally checked their expansion and the rest fled the Kingdom of Germany, although raids on the Byzantine Empire continued until 970.