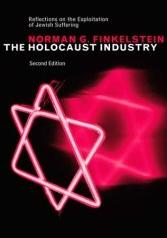 Holocaust Industry is a term coined by Jewish author Norman Finkelstein in the book The Holocaust Industry: Reflections on the Exploitation of Jewish Suffering (2000). It refers to the argued systematic collection or extortion of funds from European countries by Jewish organizations, purportedly on behalf of Jewish "survivors" of the Holocaust. Finkelstein argues that this industry is dishonest, that funds rarely reach those for whom it is purportedly collected, and that many of the organizations that claim to be concerned about the fate of Jews during the Second World War are in fact pushing agendas, such as the interests of Israel.

The often large-scale and commercialized Holocaust education‎ can be considered another aspect of the Holocaust industry.

In a more general sense, the term "Holocaust industry" refers to using the Holocaust for various forms of pecuniary and other gains, such as in commercial Holocaust fictional descriptions. See also Holocaust motivations: Argued exploitation.

The book caused Finkelstein to be denied tenure.[1] Shortly thereafter, he resigned after an undisclosed agreement with the DePaul University.[2]