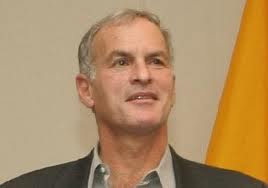 Norman Gary Finkelstein (born 1953) is an American Jewish political scientist, activist, professor, and author. He is controversial for criticisms of the Holocaust industry, notably in the 2000 book The Holocaust Industry, and for criticisms of Israel. After a controversy involving criticisms of Israel, in 2007 the DePaul University denied him tenure and placed him on administrative leave, followed by Finkelstein announcing his resignation after coming to a settlement with the university on generally undisclosed terms. In 2008, he was banned from entering Israel for 10 years.

Finkelstein has been reported to in The Holocaust Industry have made statements such as "If everyone who claims to be a [Holocaust] survivor actually is one, my mother used to exclaim, “who[m] did Hitler kill?”".[1] However, he has explicitly rejected being a "Holocaust denier", citing Raul Hilberg's views on the Holocaust.[2]