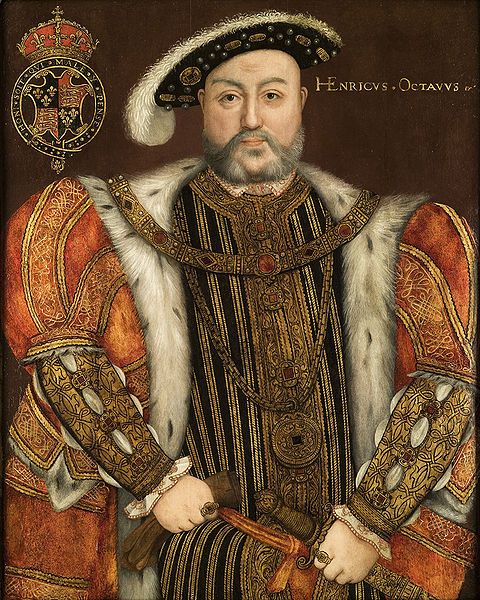 Henry VIII (June 28, 1491 – January 28, 1547) was King of England from April 21, 1509 until his death. He was also Lord of Ireland (later King of Ireland) and claimant to the Kingdom of France. Henry was the second monarch of the House of Tudor, succeeding his father, Henry VII.

Henry VIII was a significant figure in the history of the English monarchy. Although in the great part of his reign he brutally suppressed the Protestant reformation of the church,[1] a movement having roots with John Wycliffe of the 14th century, he is more popularly known for his political struggles with Rome. These struggles ultimately led to his separating the Anglican church from the Roman hierarchy, the Dissolution of the Monasteries, and establishing himself as the Supreme Head of the Church of England. Although some claim he became a Protestant on his death-bed, he advocated Catholic ceremony and doctrine throughout his life. Royal backing of the English Reformation was left to his heirs, the devout Edward VI and the renowned Elizabeth I, whilst daughter Mary I temporarily reinstated papal authority over England. Henry also oversaw the legal union of England and Wales with the Laws in Wales Acts 1535–1542. He is also noted for his six wives, two of whom were beheaded.

Part of this article consists of modified text from Wikipedia, and the article is therefore licensed under GFDL.