From Metapedia
(Redirected from King of England)
Jump to: navigation, search 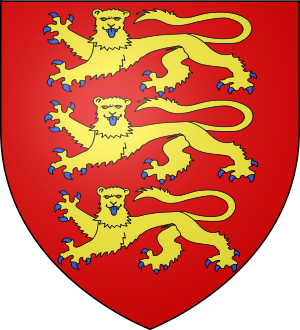 The continuous list of monarchs of England traditionally begins with Egbert of Wessex in 829. Alfred the Great and his son Edward the Elder used the title "King of the Anglo-Saxons". After Athelstan conquered Northumbria in 927, he adopted the title Rex Anglorum. Starting with Henry II in 1154, the title became Rex Angliae (King of England).

The Principality of Wales was incorporated into the Kingdom of England under the Statute of Rhuddlan in 1284, and in 1301 Edward I invested his eldest son, the future Edward II, as Prince of Wales. Since that time, with the exception of Edward III, the eldest sons of all English monarchs have borne this title. After the death of Elizabeth I without issue, in 1603, the crowns of England and Scotland were joined in personal union under James VI of Scotland, who became James I of England. By royal proclamation James titled himself "King of Great Britain", but no such kingdom was created until 1707, when England underwent legislative union with Scotland to form the United Kingdom of Great Britain.[1]

Following invasion, The House of Denmark saw a line of Danish kings reigning over England.