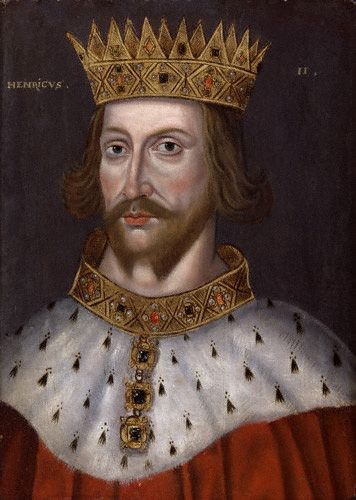 Henry II of England (March 5, 1133 – July 6, 1189) ruled as Count of Anjou, Duke of Normandy, Duke of Aquitaine, Duke of Gascony, Count of Nantes, and as King of England (1154–1189) and at times controlled parts of Wales, Scotland, Ireland, and western France. His sobriquets include "Curt Mantle" (because of his short cloak), "Fitz Empress," and sometimes "The Lion of Justice," which had also applied to his grandfather Henry I. He ranks as the first of the Plantagenet Kings.

He was born on 5 March 1133 at Le Mans, Maine, to Geoffrey Plantagenet, IV Count of Anjou, 'the Fair' (1113-1150), and the Empress Matilda (widow of Henry V, the Salian Holy Roman Emperor). Brought up in Anjou, he visited England in 1149 to help his mother in her disputed claim to the English throne, against Stephen of Blois (d.1154), a maternal grandson of William II Duke of Normandy and King of England (d.1087).

He married Eleanor of Aquitaine on 18 May 1152, but from May to August he was occupied in fighting Eleanor's ex-husband Louis VII of France and his allies. In August Henry rushed back to her, and they spent several months together. Around the end of November 1152 they parted: Henry went to spend some weeks with his mother and then sailed for England, arriving on 6 January 1153. Some historians believe that the couple's first child, William, Count of Poitiers, was born in 1153. Henry's succession to the English throne was established by the Treaty of Wallingford in 1153, after he had challenged Stephen's forces at Wallingford Castle. It was agreed that Henry would become king on Stephen's death.

Prior to coming to the throne he already controlled Normandy, Aquitaine, Gascony and Anjou on the continent. Anjou and Normandy were held through paternal heritance and Aquitaine - Gascony through his marriage with Eleanor of Aquitaine, on 18 May 1152. In addition he became King of England in 1154, replacing King Stephen. He thus effectively became more powerful than his nominal continental liege-lord, the King of France — with an empire (the Angevin Empire) that stretched from the Solway Firth almost to the Mediterranean and from the Somme to the Pyrenees. As king, he would also add Ireland to his vast domains.

Civil and Legal Reform: Struggle with the Barons

During Stephen of England's reign (d.1154) the barons had undermined the monarch's grip on the realm; Henry II saw it as his first task to reverse this shift in power. For example, Henry had castles torn down which the barons had built without authorization during Stephen's reign, and by 1159, scutage, a fee paid by vassals in lieu of military service, had become a central feature of the king's military system. Record keeping improved dramatically in order to streamline this taxation.

Henry II established courts in various parts of England and first instituted the royal practice of granting magistrates the power to render legal decisions on a wide range of civil matters in the name of the Crown. His reign saw the production of the first written legal textbook, providing the basis of today's "Common Law."

By the Assize of Clarendon (1166), trial by jury became the norm. Since the Norman Conquest, jury trials had been largely replaced by trial by ordeal and "wager of battel" (which English law did not abolish until 1819). Provision of justice and landed security was further toughened in 1176 with the Assize of Northampton, built on the earlier agreements at Clarendon. This reform proved one of Henry's major contributions to the social history of England.

Some time after 1148 St.Bernard of Clairvaux wrote a biography, the Life of St. Malachy. In it he claimed that the Irish had relapsed into a de facto pagan state, with Bernard claiming something needed to "be done" about it, to enforce a "reform". Shortly after his coronation, Henry sent an embassy to the newly elected Pope Adrian IV. Led by Bishop Arnold of Lisieux, the group of clerics are said to heave requested from Adrian a privilege authorising Henry to invade Ireland. This was granted via the Papal Bull Laudabiliter. One historian, W.L. Warren, asserts that Henry acted under the influence of a "Canterbury plot": Archbishop Theobald of Bec, John of Salisbury, and other Canterbury clergy wished to assert their hierarchical supremacy over the newly created Irish diocesan structure set down at 1152 at the Synod of Kells. Other historians have argued instead that Henry intended to secure Ireland as a lordship for his younger brother William, Count of Poitou. Therefore much of this is speculation.

Shortly thereafter, Henry's continental affairs distracted him. William died, and the Anglo-Normans ignored Ireland. It was not until 1166 that it came to the surface again. In that year, Dermot MacMurrough, King of Leinster & Dublin, was exiled from Ireland as a result of intercine tribal warfare, proceeded to England and then the continent, and sought out Henry who was in Aquitaine. He asked Henry to help him reassert control of his Irish lands, promising in return to be Henry's vassal. Henry agreed to allow Dermot to gather supporters from among his Norman vassals. The most prominent of these was an Anglo-Norman from the Welsh Marches, Richard de Clare, 2nd Earl of Pembroke, nicknamed "Strongbow". In exchange for his loyalty, Dermot offered Earl Richard his daughter Aoife (Eve) in marriage and made him heir to his petty kingdom.

Invasion followed and the Anglo-Normans quickly restored Dermot to his traditional holdings, and he even toyed with the idea of challenging for the title of Ard Ri, the titular High King. However, on May 1, 1171, Dermot died, and Henry arrived in Ireland to assert his feudal overlordship. Anglo-Normans, who had taken part in the Irish campaign, along with many Irish nobles and chiefs, took oaths of homage to Henry, and he left after six months. He never returned, but he later named his young son, the future King John of England, Lord of Ireland.

In 1172, at the Synod of Cashel, Roman Catholicism was proclaimed as the only permitted religious practice in Ireland.

Struggle with the Church and Thomas Becket

As a consequence of the improvements in the legal system, the power of church courts waned. The church naturally opposed this and found its most vehement spokesman in Thomas Becket, the Archbishop of Canterbury, formerly a close friend of Henry's and his Chancellor.

The conflict with Becket effectively began with a dispute over whether the secular courts could try clergy who had committed a secular offence. Henry attempted to subdue Becket and his fellow churchmen by making them swear to obey the "customs of the realm", but controversy ensued over what constituted these customs, and the church proved reluctant to submit. Following a heated exchange at Henry's court, Becket left England in 1164 for France to solicit in person the support of King Louis VII of France and of Pope Alexander III, who was in exile in France due to dissension in the college of Cardinals. Due to his own precarious position, Alexander remained neutral in the debate, although Becket remained in exile loosely under the protection of Louis and Pope Alexander until 1170. After reconciliation between Henry and Thomas in Normandy in 1170, Becket returned to England. Becket again confronted Henry, this time over the coronation of Prince Henry (see below). The much-quoted, although probably apocryphal, words of Henry II echo down the centuries: "Will no one rid me of this turbulent priest?" Although Henry's violent rants against Becket over the years were well documented, this time four of his knights took their king literally and travelled immediately to England, where they assassinated Becket in Canterbury Cathedral on 29 December 1170.

For this act Henry was excommunicated but obtained his rehabilitation thanks to the efforts of Robert de Torigny, abbot of Mont St Michel. As part of his penance for the death of Becket, Henry made a pilgrimage in sackcloth to his tomb, and agreed to send money to the Crusader states in Palestine, which the Knights Hospitaller and the Knights Templar would guard until Henry arrived to make use of it on pilgrimage or crusade. Afterwards, on the 21 May 1172, he was flogged in public, naked, before the door of the cathedral at Avranches, which was his capital city in Normandy. Henry delayed his crusade for many years and in the end never went at all, despite a visit to him by Patriarch Heraclius of Jerusalem in 1184 and being offered the crown of the Kingdom of Jerusalem. In 1188 he levied the Saladin tithe to pay for a new crusade; the cleric and courtier Gerald of Wales suggested his death was a divine punishment for the tithe, imposed to raise money for an abortive crusade to recapture Jerusalem, which had fallen to Saladin in 1187.

Part of this article consists of modified text from Wikipedia, and the article is therefore licensed under GFDL.
Retrieved from "http://en.metapedia.org/m/index.php?title=Henry_II_of_England&oldid=420335"
Categories: