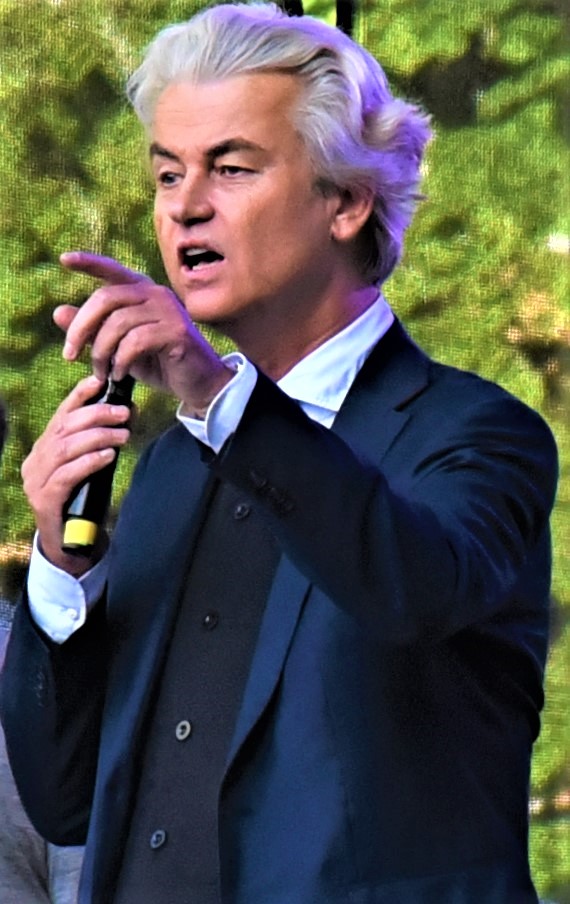 Geert Wilders (born 1963) is a Dutch politician and the founder and leader of the Dutch Party for Freedom. As being the sole member of the foundation operating the party, he in practice has absolute control over it.

Wilders is best known for his anti-Islamization views which have made him a controversial figure in the Netherlands and abroad. Since 2004 and the assassination of Theo van Gogh he has permanent personal protection by armed bodyguards. In 2008, he made a controversial film about his views on Islam, Fitna. Various attempts to convict him for "hate speech" have failed. In 2016 a new trial started.

Wilders's maternal grandmother has been stated to have been from a wealthy Jewish family.[1] Wilders grandfather is stated to have been camp commander at an infamous post-WWII Dutch camp for "Nazi" collaborators.[2] Wilders worked in Israel as a youth, has visited Israel many times, and is married to the Jewish-Hungarian diplomat Krisztina Marfai. He has expressed strong support for Israeli and Jewish interests. Despite this, few Dutch Jews have voted for his party.[3][4] See also Jews and immigration.

Wilders considers himself to be a "right-wing liberal". The Party for Freedom has advocated anti-immigration (in particular anti-Muslim immigration), anti-Islamization, and anti-EU policies.

A less often mentioned aspect of the 2017 election was the success of a non-Dutch ethnic minority interest party. "Denk, a party founded by Tunahan Kuzu and Selçuk Öztürk has become the first ever ethnic minority party in the Dutch parliament. The party, which has long been accused of being a mouthpiece for Turkish president Recep Erdogan, won three seats in an election focused on immigration. Party leader Tunahan Kuzu said: “This is the beginning of a new chapter in our history. The new Netherlands has given a vote in the House."[6]

Part of this article consists of modified text from Wikipedia, and the article is therefore licensed under GFDL.
Retrieved from "http://en.metapedia.org/m/index.php?title=Geert_Wilders&oldid=469505"
Categories: