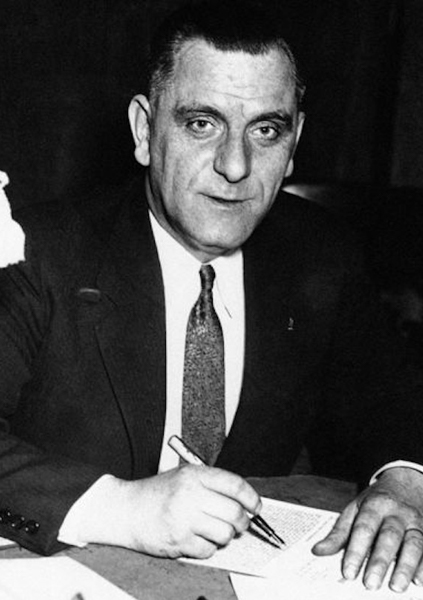 Fritz Julius Kuhn (May 15, 1896 – December 14, 1951) was the leader of the German American Bund. Previously he headed the Bund’s predecessor organization Friends of New Germany. Fritz Kuhn was labeled by the press as "The American Führer".

Fritz Kuhn was born in Munich, the son of Georg Kuhn and Julia Jystina Kuhn (born Beuth). His brother was Max Kuhn who later became a Supreme Court judge in National Socialist Germany.

During World War I, Fritz Kuhn earned an Iron Cross as an infantry lieutenant and fought along the French-Italian-Serbian-Rumanian frontier. He was wounded three times.[1] After the war, he attended and graduated from the University of Munich with a masters degree in chemical engineering. Kuhn made claims of being with Hitler during the Munich Putsch, but this has never been proven.[2]

Life in the USA

In 1923, Kuhn moved to Mexico. In May 1927 he moved to Detroit, Michigan and claimed to have worked as an industrial chemist at the Ford Motor plant.[3] On December 3, 1934 he became a naturalized citizen of the United States.[4] In October 1936 he moved to New York City.

Also during that year Kuhn along with his lieutenants George Froboese, Karl Arndt, Rudolph Markmann, and Karl Weiler traveled to the Berlin Olympics and was received by Adolf Hitler.[5] [6]

Pro-National-Socialist Germans formally organized the German-American Bund at a national convention held in Buffalo, New York, on March 29, 1936. Fritz Kuhn was made leader of the new organization. According to the Justice Department, the Bund had its largest membership of 8,500 between 1937 and 1938.[7]

In 1939, seeking to delegitimize the Bund, the half-Jewish New York City mayor Fiorello La Guardia began a politicized investigation into Kuhn. It was originally claimed Kuhn embezzled $5,641.24 from the Bund. Later the charge was reduced to $674.83.[8] The money was supposedly used to assist his mistress, Virginia Cogswell, a former Miss America, in paying her medical bills and to ship some furniture from California back east. District Attorney Thomas E. Dewey decided to press charges and won a conviction. Wendell Wilkie, the Republican rival to FDR said of the trial, “in the case of Kuhn…legal processes were abused for political purposes.”[9]

On December 6, 1939, Kuhn was sentenced to two and half to five years, and the next day entered Sing Sing prison.[10] Though Kuhn was convicted of embezzlement by the government, followers of the Bund disagreed with this judgment and continued to hold him in high regard.

In March 1942, Kuhn’s American citizenship was revoked. He was later released from Sing-Sing prison and held as an enemy alien at an internment camp in Crystal City, Texas.[11] Later he was transfered to the internment camp at Ellis Island.

On September 15, 1945 he was deported from Ellis Island to Germany and finally freed by the Americans in Asperg, Germany on April 25, 1946.[12] On July 24 ,1947 he was re-arrested in Allied occupied Germany and sent to the Dachau concentration camp near Munich for "denazification".[13]

Fritz Kuhn died on December 14, 1951, in Munich, Germany where he had been working as a chemist.